Almost every morning for five years, First Lt. Sukhbir Toor has pulled on the uniform of the United States Marine Corps. On Thursday, he also got to put on the turban of a faithful Sikh.

It was a first for the Marine Corps, which almost never allows deviations from its hallowed image, and it was a long-awaited chance for the officer to combine two of the things he holds most dear.

“I finally don’t have to pick which life I want to commit to, my faith or my country,” Lieutenant Toor, 26, said in an interview. “I can be who I am and honor both sides.”

His case is the latest in a long-running conflict between two fundamental values in the United States military: the tradition of discipline and uniformity, and the constitutional liberties the armed forces were created to defend.

While Sikh troops in Britain, Australia and Canada have long worn turbans in uniform, and scores of Sikhs do so now in other branches of the military, Lieutenant Toor’s turban is the first in the 246-year history of the Marine Corps. For generations, the Corps has fought any change to its strict appearance standards, saying that uniformity was as essential to a fighting force as well-oiled rifles.

The Marine Corps has made the allowance only to a point. Lieutenant Toor can wear a turban in daily dress at normal duty stations, but he cannot do so while deployed to a conflict zone, or when in dress uniform in a ceremonial unit, where the public could see it.

Lieutenant Toor has appealed the restrictive decision to the Marine Corps commandant, and he says that if he does not get a full accommodation, he will sue the Corps.

“We’ve come a long way, but there is still more to go,” he said. “The Marine Corps needs to show it really means what it has been saying about strength in diversity — that it doesn’t matter what you look like, it just matters that you can do your job.” 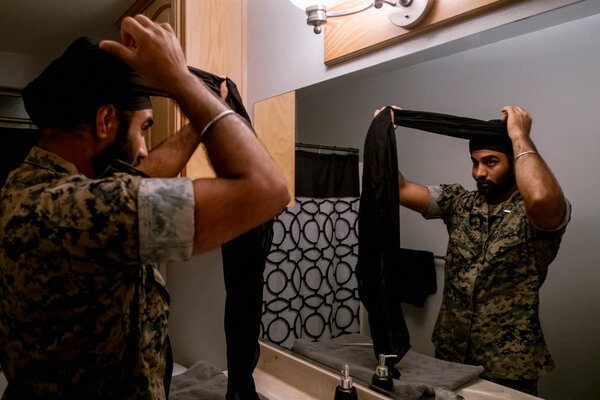 For the Marine Corps leadership, an exception as small as one man’s turban was seen as so potentially dangerous that Lieutenant Toor’s request went all the way to top Marine Corps authorities. Their initial reaction in June was largely a denial. In a stern response, one Marine Corps general warned that individual expression of that kind could fray the fabric of discipline and commitment that binds the Marines. It could erode the nation’s trust in the Corps. It could undermine combat effectiveness. It could cost lives.

“The Corps cannot experiment with the components of mission accomplishment,” Lt. Gen. Michael A. Rocco, the deputy commandant for manpower and reserve affairs, said in the response. “Failure on the battlefield is not an acceptable risk.”

Lieutenant Toor appealed to the commandant of the Marine Corps, and the Corps retreated a bit in August, allowing the lieutenant to wear a beard and turban in limited circumstances.

The compelling national interests in protecting religious freedom and in maintaining effective fighting forces have been in a tug of war at least since 1981, when an Orthodox rabbi serving in the Air Force sued the service over the right to wear a skullcap while in uniform. Over time, a legal precedent emerged requiring the military to accommodate sincerely held religious beliefs in the least restrictive way that did not hinder mission accomplishment.

Exactly what hinders mission accomplishment, however, is open to debate. Military leaders’ interpretations are often so broad that they leave little room for religious expression, a stance that has repeatedly led to lawsuits.

The other service branches, pushed by legal challenges, have become more accommodating in recent years, allowing hijabs for Muslim women in uniform, long hair for a small Christian sect and beards for a few troops who applied as Norse Heathens.

Nearly 100 Sikhs currently serve in the Army and Air Force wearing full beards and turbans. A Sikh cadet graduated from the U.S. Military Academy at West Point this spring in a smartly tied white head wrapping, among a sea of brimmed service caps.

“It’s become fairly routine, and there have been very few issues. That’s what makes the Marine response in this case so surprising,” said Giselle Klapper, a civil rights attorney with an advocacy group, the Sikh Coalition, which has helped Sikh troops apply for exceptions.

But the Marine Corps doesn’t like to retreat and has never given much weight to what the other military branches do. It is the smallest branch and regards itself as the most elite. It has often resisted changes for years after the rest of the military moved on. The Corps was the last branch to allow Black men to enlist, and it balked at a 2015 mandate to allow women to serve in combat.

The Corps’s argument, time after time, has been that change could hobble its ability to fight.

“In order to build squads that will move forward in a combat environment where people are dying, a strong team bond is required,” Col. Kelly Frushour, a spokeswoman for Marine Headquarters, said in written responses to questions from The New York Times about Lieutenant Toor’s case. “Uniformity is one of the tools the Corps uses to forge that bond. What the Corps is protecting is its ability to win on the battlefield, so that the Constitution can remain the law of the land.”

Requests for accommodations have been rare in the Corps. Among roughly 180,000 active-duty Marines, there have been just 33 applications in recent years for exceptions to uniform regulations on religious grounds, including requests concerning long hair, beards or more modest physical training clothing. About two-thirds of the requests were approved, but before Lieutenant Toor, no one had been given permission to wear a beard or visible religious headwear.

Lieutenant Toor grew up in Washington and Ohio, the son of Indian immigrants. His father wore a beard, a turban and other symbols of Sikh religious devotion, including a simple steel bracelet and small blade that are meant to remind faithful Sikhs that they are expected to act as virtuous — and if necessary, armed — defenders of the innocent and oppressed.

Growing up in the wake of the terrorist attacks of 2001, Lieutenant Toor knew that many Americans wrongly associated Sikhs with dangerous religious fanatics. He hoped his military service would help change that.

He joined the Marines after college in 2017, knowing he would at least initially have to forgo the physical symbols of his faith, but he was willing to make the sacrifice. “I felt there was a debt to be paid,” he said about his choice. “My family came to this country seeking the American dream, and we got it.”

Believing it was wrong to ask for anything before he had given of himself, he shaved daily and wore a Marine Corps utility cap for years without complaint. When he was selected this spring for promotion to captain, he decided it was time.

He wrote his formal request for a religious accommodation in April. Two months later, he got a decision from the head of manpower and reserve affairs. After lecturing him on the dangers of his request, the decision letter granted the accommodation — but with so many caveats that it amounted to a denial. The lieutenant would be allowed wear a beard and turban whenever he wanted, as long as it was not while he was deployed, serving in a combat unit that might deploy, or performing ceremonial duties in dress uniform.

“Like, every day,” the lieutenant said with a laugh in a telephone interview over the summer from Darwin, Australia, where he was training with American and Australian forces. “That is just what I do. I’m a combat arms officer.”

He said that the limits meant that “I would have to either sacrifice my career or my ability to practice my religion.”

After he appealed the decision, the Marine Corps retreated somewhat on ordinary duty but refused to budge on wearing a turban during ceremonial duties.

The rationale was that the Corps must sometimes limit individual religious rights to avoid appearing partial to any particular faith.

“Marines represent the entirety of the Marine Corps,” said Colonel Frushour, the Corps headquarters spokeswoman. “Therefore, we strive to present a neutral image to the public. The Marine Corps wants all with the propensity and ability to serve to see a place for themselves within our ranks.”

Lieutenant Toor worries that the opposite is true — that the hard stance on beards and turbans will make Muslims, Sikhs and others less likely to serve and deny them equal opportunity.

“Sikh kids growing up might not be able to see themselves in uniform,” he said. “Even if they want to serve, they might not think their country wants then.”

As for esprit de corps in the ranks, Lieutenant Toor said he couldn’t see how the shape of his headgear would affect the 50 Marines in the artillery platoon he recently commanded.

“Look, I’m on the ground level with the trigger-pullers every day,” he said. “To them, I don’t think it makes a difference. We have men, women, people of all races in my platoon. We all wear green, we all bleed red. My Marines didn’t respect me because of what I had on my head.”

Though part of an old debate, his case includes a new argument. Past denials of accommodation requests have typically cited practical safety concerns, like beards interfering with gas masks. That approach faltered in recent years after a federal judge noted with disapproval that the Army was denying shaving waivers requested on religious grounds while granting more than 100,000 of them on medical grounds.

In Lieutenant Toor’s case, though, the Marine Corps is arguing that the mere sight of a deviation from uniformity inherently hinders mission accomplishment, said Amandeep S. Sidhu, a lawyer at the firm of Winston & Strawn who has represented a number of Sikhs in cases against the Army. He said he doubted the courts would agree.

“The problem with that is that we have shown through practical demonstration that it isn’t the case,” Mr. Sidhu said, pointing to Sikhs serving successfully in other branches. “We don’t want change to get rammed down anyone’s throat by a federal court, but that seems like the path we are on.”