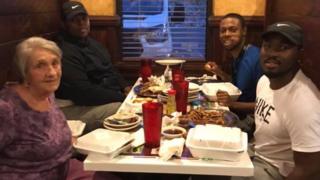 “This woman changed my outlook on life.”

When a 23-year-old went out for a meal in Alabama with a couple of his friends, he noticed an elderly woman sitting on her own.

“I don’t ever want to eat alone,” Jamario Howard said. “I’m a people person, so I decided to talk to her.”

Pensioner Eleanor Baker, who visits the restaurant about once a week, “had a look on her face when I approached her”, Jamario said.

But when he introduced himself and asked if he could sit with her, they started chatting straight away.

She told him she had lost her husband and the next day would have been their 60th wedding anniversary. He then decided it would be a nice gesture to invite her to eat with his friends.

“She was excited to sit with us and came over straight away. We all felt really comfortable and asked her a bunch of questions.”

He and his friends talked about her children, grandchildren and dog, then shared numbers before they went their separate ways.

So tonight JaMychol Baker Tae Knight and myself went out to eat at this place called Brads in Oxford, and after us…

When he posted a photo on Facebook of the four of them around the table, it soon got picked up and shared across social media as a wonderful act of kindness. He’s also been interviewed by local media.

“It’s been a bit overwhelming at times, thousands have been in touch, but I’ve enjoyed meeting lots of people,” he said. “I’m a people person, I’d talk to a wall!”

On Twitter, Jamario’s comment “She just don’t know that she made my night!” touched some hearts, with one person saying: “No parent could be any prouder than yours must be.”

I’m sure you won’t admit it, heck you may not even know it, but you’re an angel. No parent could be any prouder than yours must be. ❤️

His mother and the rest of his family are indeed very proud of him and he hopes his actions will help encourage more people to reach out to men and women who might need some company.

“I want people to see that it’s okay to be kind. It means a lot that this is seen.”

“Kindness doesn’t have an age limit on it. Just follow your heart” said Jamario, whose fundamental message is “Always be kind.”

Nigel Farage outlined that the former Prime Minister feared Conservative MPs would “cross the floor” and join Ukip. The Brexit Party leader made the comment…

When Chris Van Camp entered a Saskatchewan Penitentiary cell, his alleged killer welcomed him like a friend, according to testimony from correctional officers. Tyler Vandewater…