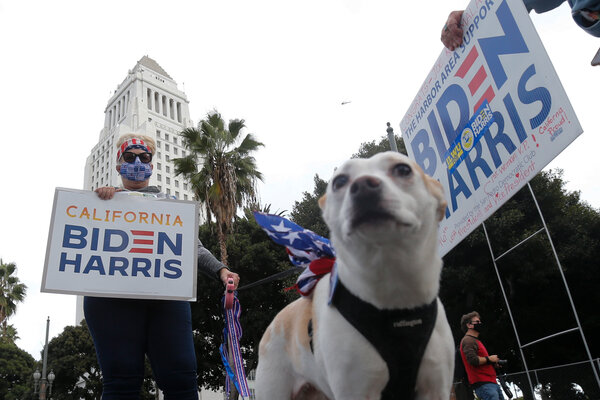 Gov. Gavin Newsom has been coy, and so have the contenders.

But make no mistake: California’s politicos are all guessing whom the governor will pick to replace Senator Kamala Harris when she is sworn in as vice president on Jan. 20.

Jockeying for the seat started the day President-elect Joseph R. Biden Jr. picked Ms. Harris as his running mate — arguably even sooner, if you count the days when she and a fellow Californian, Representative Karen Bass, shot to the top of the “veepstakes.”

It is, as Raphael Sonenshein, the executive director of the Pat Brown Institute for Public Affairs at Cal State Los Angeles, put it, “a game of musical chairs like you’ve never seen before.”

The speculation has been wild, and the list of possibilities is long.

Asked in August whether would-be candidates had started pitching themselves for the job, Mr. Newsom laughed.

“You may be the only one who hasn’t, unless you just did — and that is only a slight exaggeration,” the governor responded.

On Monday, the governor once again declined to talk about whom he’s considering and wouldn’t give a timeline for his decision, noting that the current occupant of the White House still hadn’t conceded and that he also hadn’t been able to talk with Ms. Harris “vis-à-vis her own timeline and needs.”

“The process is just beginning to unfold,” Mr. Newsom said.

As my colleague Shawn Hubler previously reported, Mr. Newsom will have to balance many, potentially competing, considerations in making his choice.

Ms. Harris, for instance, is only the second Black woman in the U.S. Senate. Many Californians may want to see another Black woman or woman of color fill the seat. Ms. Bass’s name has come up, as has that of Representative Barbara Lee and Mayor London Breed of San Francisco.

But Latinos make up roughly 40 percent of the state’s population, and the state has never had a Latino senator.

Political observers have noted Mr. Newsom’s penchant for being able to call his moves history-making. And two of his top administration officials, Attorney General Xavier Becerra and Secretary of State Alex Padilla, are Latino men.

Mr. Sonenshein told me recently that another major consideration will be who will be able to hang on to the seat in 2022.

[Read the full story from August on the jockeying for Ms. Harris’s Senate seat.]

While Mr. Becerra has raised his profile in recent years, leading the state’s many lawsuits against the Trump administration, Mr. Padilla has been front and center in the orchestration of a consequential election during a pandemic — which still drew record-breaking turnout and went off mostly without a hitch.

Ms. Bass, he said, is “a quiet force, but is very well-liked in the Democratic Party.”

The calculus will change once some of the potential picks are snapped up by the Biden administration. Mr. Becerra, for instance, could be in contention for a position leading a Biden Justice Department.

Mr. Sonenshein said he saw Mr. Padilla as “in the lead,” and Mr. Becerra and Ms. Bass as rounding out a kind of top tier of likely contenders.

[Read more from Politico about which Californians might be tapped for the Biden-Harris administration.]

One common denominator signals a perhaps more interesting shift in the state, though, Mr. Sonenshein said: “The top three are all from Southern California.”

For years, he said, there’s been a sense that Northern California Democrats “pass jobs around.”

But if the governor chooses a senator with ties to Southern California, hot on the heels of high-profile progressive victories in Los Angeles, it would fuel the notion that the center of Democratic politics — in California and, by extension, the nation — has moved south.

In any case, Mr. Newsom is still dealing with a raging pandemic. On Monday, he emphasized that’s his top priority.

An update on the pandemic

California officials on Monday pleaded with residents to remain vigilant about wearing masks and staying away from friends and loved ones, as encouraging news spread about Pfizer’s vaccine work and Mr. Biden’s election heralded shifts in the nation’s Covid-19 response.

“Please, please let us double down on the work we have done,” Mr. Newsom said on Monday. “I’m not trying to take away any enthusiasm, I’m trying to be honest and forthright.”

Speaking for the first time since the election was called, Mr. Newsom’s tone was a mix of optimistic and foreboding.

Case numbers, he said, had begun to rise across the state, as had hospitalizations. Although testing has ramped up, reaching almost 190,000 tests reported over the past day, the state’s average positivity rate over the past two weeks had risen to 3.7 percent after reaching a low of 2.5 percent early last month.

Cold weather has arrived in some areas and holidays continue to approach, which officials have worried is leading to more in-person, indoor gatherings. Counties across the state were likely to be moved into more restrictive reopening tiers this week.

Still, Mr. Newsom lauded California’s response and said that while he looked forward to working “hand in glove” with a Biden administration on the distribution of a coronavirus vaccine, the state was pressing ahead with its independent vaccine safety review.

Earlier in the day, Mr. Biden announced that he had tapped a team of health experts, including three from the University of California, San Francisco, to help guide his Covid-19 response — a move Mr. Newsom celebrated as evidence of California’s deep pool of scientists and renowned researchers.

But he emphasized that figuring out who should get what are expected to be extremely limited doses of a vaccine will still be difficult, nuanced work that requires an understanding of California’s specific underserved communities.

What’s the big deal? When can you get one? (Not as soon as you’re thinking.) Here are 11 things to know about Pfizer’s Covid-19 vaccine. [The New York Times]

San Francisco school board members are pushing a plan that would compel public schools to start reopening by Jan. 25. [The San Francisco Chronicle]

Hawaii is trying to bring in tourists with a new reopening plan. But is it good for locals? [The New York Times]

And a quick note: Because of an editing error, yesterday’s newsletter misstated one of Senator Kamala Harris’s historic distinctions. She is the first woman of South Asian descent to be elected vice president, not the first South American. (Thank you to all our close readers for emailing.)