HOUSTON — In her kitchen, Juanita Hall routinely found opossums staring back at her from the cage trap she kept under the table. In one room, the flooring had simply washed away. The door to the back bedroom — her mother’s, and still filled with her possessions — stayed closed. Those walls, like many others in the house, were streaked with mold.

And that was all before a winter storm last month left Ms. Hall shivering over a heater and caused pipes to leak. The culprit behind so much of the damage to her home had been Hurricane Harvey. The storm hit Houston in 2017, and for many, the trauma endured as a haunting memory. But for Ms. Hall, almost four years later, the devastation remained a grinding reality.

“I think about it every day, all day long,” Ms. Hall, 59, said as she walked through the house she had lived in since childhood.

The modest house on Eugene Street, clad in white siding and shaded by a magnolia tree, was the embodiment of her father’s aspirations for his family. It was the inheritance he left for Ms. Hall and the generations to come: a place to return to when relationships faltered or jobs were lost. No matter what, the house would be there, and it would be theirs. 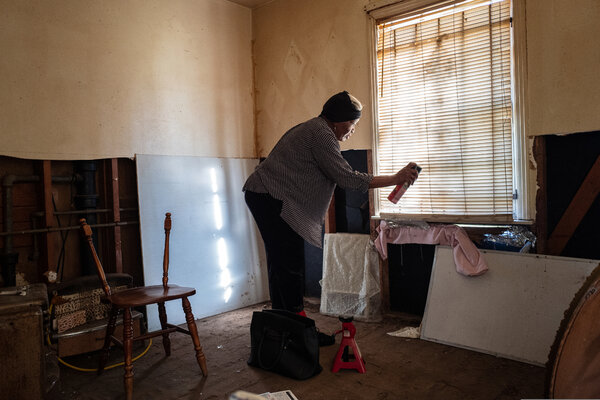 Owning a home has long been part of Houston’s promise for many working-class families, offering security and a foothold for upward mobility. But disasters — flood after flood — have kept coming. A changing climate threatens more. In Houston’s poorest neighborhoods, the houses are no longer the safety net they were intended to be.

A few months before Harvey, Ms. Hall ran into her mother’s bedroom and found her collapsed on the floor. Now, she cannot forget the request her mother made soon before she died: Don’t y’all lose my house.

After all this time, and all this frustration, her patience had worn thin. “I’m tired of the unknown,” Ms. Hall conceded. Still, she wanted so badly to keep her word.

On top of everything else, disaster

A storm, as it cuts its path, may not recognize race or class, but the pace of recovery very often does. It is an imbalance that becomes more pronounced with each storm: There are the neighborhoods that bounce back. And there are the others — with lower incomes and largely nonwhite residents — where every event arrives as another setback on an interminable slog.

Yet it also plunged them into a familiar agony: no electricity, waterlogged homes (this time from burst pipes) and certainty that they faced more of a frustration they knew all too well from wrangling with bureaucracies for help that was rarely enough, if it ever came at all.

As temperatures and sea levels rise, as wildfire seasons grow more intense, and as hurricanes have become slower and stronger, more and more communities are grappling with friction powered by climate change — between practicality and the comfort of the status quo, the pull of home and the fatigue from pushing against the momentum of nature to stay there.

In a section of the northeastern part of Houston hemmed by intersecting freeways — in neighborhoods like the Fifth Ward, Kashmere Gardens and Trinity Gardens — many residents see the unevenness of their recovery fitting into a pattern of neglect. They drive down main thoroughfares where storefronts aren’t just vacant, but long abandoned. They have to leave their neighborhoods to find supermarkets and pharmacies. Industrial pollution has been linked to cancer clusters. Poverty has become entrenched.

Even if residents wanted to move, in an increasingly expensive city their options were slim.

“They’ve lost in a lot of ways,” said Letitia Plummer, a Houston city councilwoman. “These neighborhoods are just having issue after issue, and none of their original issues have been dealt with or resolved. This is layer upon layer of injury.”

Tired but still at it

For nearly four years, Ms. Hall has spent every day at her home but has slept in a spare bed at her sister’s apartment, lumbering up stairs her knees can barely take. Her brother, Clifton, refused to leave, and she feared for him. He’d had a stroke and mostly stayed in his dark, disheveled room watching television.

She said she received roughly $18,000 in government disaster relief after Hurricane Harvey, which helped but did not go far. She had contractors who assured her they would help clear out her house and then stopped taking her calls. Her home insurance had been canceled in 2016.

She had old flooring that still needed to be pulled up and walls that were only half torn down. There were holes that allowed vermin and wasps to sneak through. The musty stench of mold was heavy.

“I think he’s clearing the air when I come in here,” Ms. Hall said, having just recited the silent prayer she repeated every time she crossed the threshold into her home. “God is the only thing in my life that has not let me down.”

The thread of hope that she was holding to was a federally funded program for rehabilitating and rebuilding homes hit by Harvey. She had tried before, but then the program became ensnared in a dispute between the state and the city officials who had been running it. Texas officials asserted that the city had lagged in making progress and wrested away control.

Now that the Texas General Land Office had taken over administering the program, Ms. Hall has had to essentially start anew. She tried to take the bureaucratic hurdles in stride. “My folks used to say, if it’s easy, baby, question it,” Ms Hall said. Even so, she acknowledged her exasperation, having to gather reams of documents again. Getting this far had taken a long time.

Since the hurricane, she joined neighbors in groups like the Harvey Forgotten Survivors Caucus, which helped patch up her house. She has shared her story in the pages of The Houston Chronicle, approached local officials to vent her frustration and tried to get word of her situation to Trae tha Truth, the Houston rapper who has been helping storm victims rebuild.

And she also learned that hers was, in many ways, a familiar set of circumstances, living in a home that had been handed down through family and amounted to just about the entirety of their wealth.

Just over a year ago, Mal Moses’s mother died, and the house he grew up in became his. Mr. Moses, 63, has watched the neighborhood evolve: The community was drained of more than just white residents. Businesses left. So too did a sense of opportunity.

He did not have insurance, and his other efforts to gain assistance after Hurricane Harvey failed. West Street Recovery, a community nonprofit founded in the immediate aftermath of the storm, repaired his home, replacing drywall and flooring, making much of it livable again.

Still, plenty of work remained: The piers of a back room were sinking, and last month’s storm wrecked parts of his plumbing. He constantly hears “critters” (roof rats, mostly) skittering through his attic. On a recent afternoon, the house was still messy from the days of freezing cold and rotating power outages that meant only fleeting spurts of electricity.

His house was another thread in the skein of complications that consumed his life, all of which were caused or made worse by a lack of money.

But Mr. Moses can’t afford to leave. His Social Security checks don’t go far, and his girlfriend, who lives with him, makes $40 a day caring for her mother’s bed-bound neighbor part time. “The only option is to stay where you’re at,” he said. “That’s it.”

‘This is an assignment’

Ms. Hall was propelled by a sense of obligation. Even some of her siblings questioned if she dwelled too much in the past. “Some of my family say, ‘You’re holding onto a thing,’” she said. “It’s my home. Don’t call it a thing.”

Back injuries forced her to leave the job she had with a state agency for more than 20 years. But it allowed her to do something more meaningful: Take care of her 5-year-old grandniece while the girl’s mother works.

“My baby,” she said, pulling out her cellphone to swipe through pictures. Her name is Bella, and she was the first child born in the family in 21 years.

Ms. Hall was 4 when her father, Clifton Sr., bought the house. He moved the family from Normangee, a tiny town outside Madisonville, a slightly less tiny town on the interstate between Houston and Dallas. He got a job as a truck driver, the job he held until he retired.

Her bond with her father had always been tight. He taught her how to change oil and repair light fixtures. When she discovered she could not have children, his words soothed her, telling her God meant for her to tend to the children around her who needed her care. “You’re more of a mother to these children than the mothers,” he told her. And when he died, he wanted her to oversee his estate.

Ms. Hall had finally assembled the documents she needed. She just had to figure out how to attach them to an email and send them to the state. Her caseworker had pumped up her optimism. The program determines if a home is salvageable and then, using the occupancy rules and the specific needs of a family, maps out a plan. (State officials said they were familiar with Ms. Hall’s case and said she seemed like a strong candidate; they were just waiting on her documents.)

She had been through too much not to have skepticism. “Watch, something else will come up,” she said. Still, she was already thinking about clearing the house in preparation for construction. She imagined Bella swinging in the backyard.

Given the condition of the home, it would most likely have to be torn down. She accepted that. She loved that house. She spent her childhood there. Her parents died there. But her commitment was less to the house in its physical form than the idea it represented. “The old American dream, they did it,” she said of her parents. She would keep her promise to her mother.

“This is an assignment to me, and I want to get it done,” Ms. Hall said sitting on her front porch, washed in the light of a crisp afternoon filtering through the leaves of the magnolia tree. “If I die the day after, I’m satisfied.”

Her father’s dream was now the one she held for Bella: No matter what, the house would be there, and it would be hers.