Richard Williamson, 86, was rushed from a Florida jail to a hospital last July. Within two weeks, he had died of Covid-19.

Hours after Cameron Melius, 26, was released from a Virginia jail in October, he was taken by ambulance to a hospital, where he died. The coronavirus, the authorities said, was among the causes.

And in New York City, Juan Cruz, 57, who fell ill with Covid-19 while in jail, was moved from a hospital’s jail ward into its regular unit before dying.

None of these deaths have been included in official Covid-19 mortality tolls of the jails where the men had been detained. And these cases are not unique. The New York Times identified dozens of people around the country who died under similar circumstances but were not included in official counts.

In some cases, in places including Texas, Ohio and California, deaths were added to facilities’ virus tolls after The Times brought missing names to the attention of officials. In other cases, people who were infected with the coronavirus while incarcerated — but granted legal releases because of the severity of their illnesses — were not included in the death tallies of the jails where they got sick. Still other inmates’ deaths were left off facilities’ virus tolls for reasons that are unexplained.

More than 2,700 people are reported to have died of Covid-19 in connection to U.S. prisons, jails and immigration detention centers, but the additional cases raise the prospect that the known toll on incarcerated people falls far short of providing the full picture. 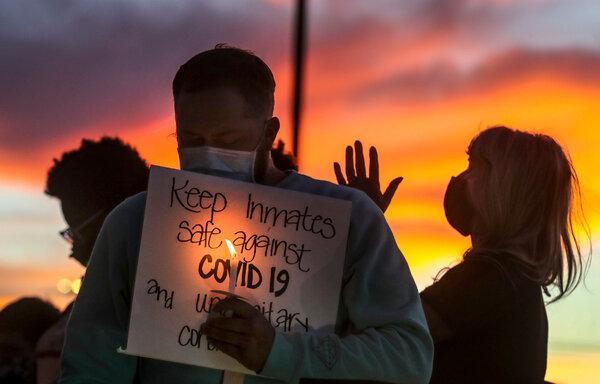 Concerns about how coronavirus deaths are documented have emerged throughout the pandemic, including a finding that the toll among nursing home residents in New York State was far higher than known because thousands who died in hospitals had not been included.

A surge in deaths across the country last year that went beyond the known Covid-19 toll has health experts suggesting that some virus cases went undiagnosed or were misattributed to other causes. There have also been inconsistencies and shifting guidance regarding which deaths should count as coronavirus deaths.

Public health officials say the prospect of overlooked virus deaths tied to the nation’s prisons, jails and immigration detention centers carries particular risks. It is challenging, the experts say, to prepare prisons for future epidemics without knowing the full toll. For now, the publicly known death totals connected to incarceration largely come from the facilities themselves.

“You can’t make good public policy if you don’t know what’s actually going on on the ground,” said Sharon Dolovich, director of the Covid Behind Bars Data Project at the University of California, Los Angeles, which tracks coronavirus deaths in American prisons.

Prison and jail officials defended their methodologies for tallying coronavirus deaths of incarcerated people, saying they followed all federal and local documentation requirements. Some noted that their task was the tracking of “in custody” deaths, and suggested that including the deaths of people who had recently been in their care — but no longer were — would be both complex and impractical, and might even wind up overstating the number of virus cases with ties to the facilities.

“It is unfair to expect jails to somehow take ownership of what happens to people once they are released from our custody,” said Kathy Hieatt, a spokeswoman for the Virginia Beach Sheriff’s Office, which held Mr. Melius in custody. “We follow the law and the extensive standards set by the Virginia Department of Corrections, which include the investigating and reporting of anyone who dies while in custody. Neither require reporting of deaths of former inmates.” She added: “It is asinine to think that we could somehow keep tabs on those thousands of people and take responsibility for them.”

Throughout the pandemic, prison systems have used disparate methods to publicly report deaths connected to Covid-19. Nevada’s prisons say they inform state heath officials of inmate Covid-19 deaths but do not make them public. Mississippi prison authorities said no inmates had died from the coronavirus in their facilities before announcing in January that nearly two dozen prisoner deaths were tied to Covid-19.

And in Texas, a prison medical committee is re-examining each case in which a medical examiner said Covid-19 was among the causes of death, and has sometimes overruled the earlier findings, according to Jeremy Desel, a spokesman for the state prison system. Shelia Bradley, a 53-year-old prisoner, was found by a medical examiner to have died of “bacterial and possibly fungal pneumonia, a complication of Covid-19,” but the committee concluded that she died from “acute bacterial bronchopneumonia,” without listing Covid-19.

The Centers for Disease Control and Prevention has recommended that any fatality in which Covid-19 is listed as “a contributing cause” on the death certificate be deemed a coronavirus death even if other causes also are noted, but state and local officials have sometimes taken varying approaches. Further complicating matters, there can be discrepancies between what medical examiners deem the cause of a death and what is listed on death certificates, which are not publicly available in most cases.

In another dozen cases identified by The Times, officials say fatalities were not included in tallies of prisoners who died of the virus because the inmates had been formally released from custody before they died. Some of the deaths have been reported by other publications, including North Carolina Health News and The City in New York.

Mr. Melius, who worked in a vape shop, died two days after he finished his sentence at a jail in Virginia Beach, where he had been arrested on charges of misdemeanor assault and a probation violation.

Covid-19 had spread through the jail, and Mr. Melius’s mother, Tammy Porter, said he fell seriously ill about four hours after he was released. At a hospital that afternoon, he tested positive for the coronavirus and was placed on a ventilator.

Ms. Hieatt, the Virginia Beach Sheriff’s Office spokeswoman, said Mr. Melius’s death was not counted in the jail’s toll because he was no longer in custody when he died, nor had he complained of illness while in jail. She suggested that drug use may have played a role in his death, noting that an autopsy found fentanyl in Mr. Melius’s system.

A medical examiner concluded that Mr. Melius’s death was as a result of “anoxic encephalopathy following cardiac arrest, in addition to Covid-19 respiratory infection.”

Anoxic encephalopathy, a lack of oxygen to the brain, can be caused by a variety of factors, experts said, including cardiac arrest or a drug overdose. A summary of the medical examiner’s autopsy report included no mention of drugs, and a spokeswoman for the medical examiner declined to comment beyond the summary. Complete autopsy reports are not part of the public record in Virginia, nor are death certificates.

In New York City, Juan Cruz had been awaiting trial in jail for two years when he died of Covid-19 in June 2020.

On May 1, 2020, Mr. Cruz, who had pleaded not guilty on a sexual assault charge, tested positive for the virus while he was in the Rikers Island jail complex, court records show. Within days, he was transferred to the jail ward of Bellevue Hospital and shackled to his bed frame. On May 12, he was placed on a ventilator, court records show.

Mr. Cruz’s lawyers eventually convinced officials to release Mr. Cruz because of the severity of his illness. His handcuffs were removed, and he was taken to a different wing of the hospital. He died there of Covid-19 three weeks later.

Jail authorities in New York City say they have not counted the death of Mr. Cruz among its Covid-19 fatalities because Mr. Cruz was not in custody when he died.

After The Times raised Mr. Cruz’s circumstances with New York officials, along with several other deaths not included in jail counts, a spokesman for Mayor Bill de Blasio said the administration would be more straightforward about disclosing Covid-19 deaths like Mr. Cruz’s in the future.

In Marion County, Fla., Mr. Williamson, who was awaiting trial on charges of sexual battery on a child, had struggled with ailments long before he got the virus. He had suffered three strokes, had congestive heart failure and was nearly blind, said Chris Williamson, his son.

By July 2020, after nine months in jail, Mr. Williamson had been hospitalized for Covid-19 and was on a ventilator, his son said. When his condition further deteriorated, prosecutors dropped the charges — officially releasing him from custody — because they knew he was unlikely to survive.

Mr. Williamson died in the hospital a few weeks later, and was not included in the county jail’s Covid-19 toll.

“It’s kind of that gray area,” Mr. Williamson’s son said, “where they can legitimately say that they’ve had no Covid-19 deaths because maybe no one’s actually died inside of the jail with Covid-19 — because they sent him to the hospital to die.”