On Monday, a group of Upper West Siders who had organized against the placement of 235 homeless men in a residential hotel in their neighborhood received some unwelcome news. On the morning the men were supposed to move far downtown, a judge ruled that they could remain where they were. Relocating would be too disruptive and traumatic to people piecing their lives back together amid a pandemic

Until that point, it seemed the antagonists had civic power on their side; self-interest was coming up ahead as it so often does. Last month, Mayor Bill de Blasio agreed to get the homeless men out of the complainants’ way — removing them from the Labradoodle serenity of the West 70s, where a vocal minority was maintaining that their lives had been upended by ugliness and disorder.

The idea that it would take at least a month before the homeless men could be relocated prompted rage in a closed Facebook group, where little effort was made to conceal the most unsettling prejudices.

As one woman, a corporate executive, theorized, the men probably sought to stay in the neighborhood, not in pursuit of some stability but rather because there are “lots of stores to shoplift from” and “unmanned vestibules they can vandalize.” In fact, the overall crime rate in the neighborhood over the past month is down from the same period last year; there have been no murders, no shootings.

The anger among some of those opposed to the temporary shelter wasn’t just that they hadn’t been given what they wanted but that they didn’t get what they paid for. In this instance, they had hired an expensive lawyer, Randy Mastro, a former deputy mayor to Rudy Giuliani, to help them get the unhoused out of view. Now in their private social media postings they wondered where he was and what he had really done for them.

Clearly his contributions were sufficient enough to ignite the fury of protesters on the other side of the debate, who defaced Mr. Mastro’s East Side townhouse this week, marking it with red paint and profanities (“Randy Mastro You Can’t Displace Us”).

The fight over sheltering exemplifies just one of the ways the pandemic has deepened the class divide, while paradoxically revealing that old-style transactionalism no longer reliably yielded the same gifts. The privileged were now playing on a game board that had changed. 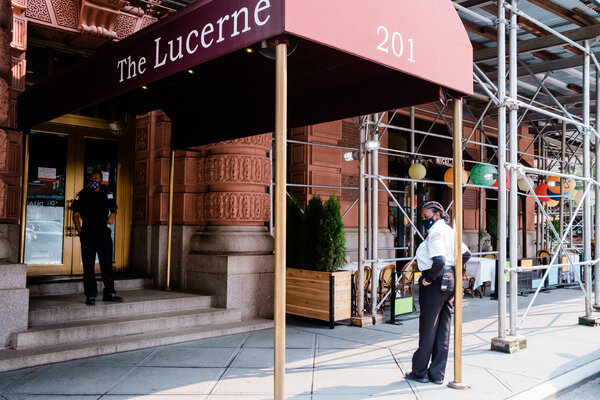 This bewildered entitlement is not confined to those hoping to buy their way to a version of the Upper West Side that felt like Westchester. It was echoed by parents in New York’s private-school world, as plans for reopening were announced in August. Many schools — because of teacher resistance, building constraints and so on — were not going to be able to offer live instruction five days a week.

This infuriated many parents, who believed that their high tuition fees ought to serve as a hedge against inconvenience during a global crisis. One email I came across from a father sent to the head of his children’s school began by calling the proposed schedule “a failure” and pointing out that for $50,000 a year, his exposure, essentially, should be minimized.

An excellent article in the new issue of the Atlantic that ignited the schadenfreude of parents from Bethesda, Md., to Newton, Mass., made similar observations about the diminishing returns on a particular kind of loaded investment. In the piece, the writer, Ruth S. Barrett, outlines the shifting fortunes of wealthy and maniacal parents who immerse their children in boutique sports — squash, fencing — purely as a means of lubricating the path to the Ivy League.

For a long time, a commitment to 10,000 hours, live-in coaches and sports psychologists on speed-dial could position a child toward that goal well enough. But the coronavirus killed sports at a time when a focus on equity was already causing universities to re-evaluate the patrician leanings of their athletic programs. The course was shutting down; the dream of Dartmouth was becoming the reality of Michigan State.

During the seven months the pandemic has had us by the scruff, millions of people have been propelled into crises of joblessness, grief, fear, faith, poverty, dislocation. But even as the rich have managed to accelerate their gains in a perpetual war against fairness, the victories have become more complicated. This has become especially obvious at the level of urban policy, where the disparity is the most pronounced.

If the world were not in such chaos at the moment, the fate of a luxury condominium building on West 66th Street would have surely gained much more attention. Last month, a New York State Supreme Court judge unexpectedly overruled the city’s decision to allow the construction of what would have become the tallest building on the Upper West Side. Extell, a major developer and birther of Billionaire’s Row, had planned to fill the tower with 198 feet of empty vertical space to create more apartments on higher floors, which command more money.

But the effect of what the judge equated to “putting a frankfurter in the middle of a hamburger” was “too brazen to be called a subterfuge.’’ Instead, he wrote, “the developer simply thumbed its nose at the rules.” (A few days earlier, the same judge, Arthur F. Engoron, ordered Eric Trump to sit for a deposition in an investigation of fraud into his family’s real estate business.)

For a brief time, the homeless men housed at the Lucerne, the residential hotel on the Upper West Side where they have been permitted to stay, were to be sent to a Radisson Hotel near Wall Street. There, too, some residents balked at the prospect of their arrival. At a community meeting a few weeks ago, one woman living in a 408-unit building on Pine Street, where the condominiums were designed by Armani/Casa, said that it was “inevitable” that congregating 235 men, some with substance-abuse and mental-health issues, would “increase violent events throughout the neighborhood.”

When it was determined that the men would remain at the Lucerne after all, it looked as if the residents of the financial district had “won.’’ But as it happened, other homeless men were soon going to be coming to the Radisson. And eventually, it would be made into a permanent shelter.