It was about 2 a.m. on a Sunday when the gross-out horror-comedy “Class of Nuke ’Em High” started playing at the Mahoning Drive-In. This was the last screening at TromaDance, an annual showcase of low-budget horror and sex comedies produced by the Queens-based Troma movie studio. Earlier that evening, about 600 cars had piled into the drive-in in Lehighton, Pa., but by 2 a.m., only the die-hards remained. Kevin Schmidt, an extra in the film, was among them.

He had driven to the Mahoning from Summit, N.J., and hadn’t seen the movie projected on screen since it was first shown in Jersey City in December 1986. “This is the only time I can justify driving 100 miles to see a movie,” Mr. Schmidt said much earlier in the evening.

By the time the evening was over, it had been another success for the Mahoning, a 72-year-old drive-in theater that was left for dead just seven years ago. And while the pandemic has helped spur a small-scale revival of the drive-in, it doesn’t quite explain what’s going on at this theater in rural Pennsylvania an hour south of Scranton.

“There’s a feeling of excitement that I get every time I drive past the Mahoning’s sign and see the huge screen get closer and closer,” said Andrew Ramallo, who drove from his home in Rego Park, Queens. His car was one of dozens with out-of-state plates. In fact, he has made the 100-plus-mile drive from New York to Lehighton a half-dozen times since 2019. “Like visiting an old friend,” he said, “there’s an overwhelming sense of familiarity.” 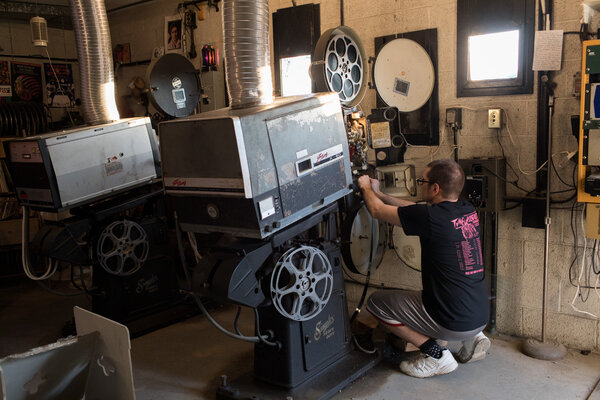 The Mahoning is not the only successful drive-in theater in the area. There’s the Delsea in Vineland, in southern New Jersey, and the Hi-Way in Coxsackie, in upstate New York, but they mostly screen new movies that are also showing at indoor theaters. A few New York City drive-ins screen older movies, including the Skyline in Greenpoint and the Bel Aire Diner in Astoria. But the movies they show can probably be streamed at home. And they don’t have a devoted audience willing to travel hundreds of miles to see them.

Movie screenings at the Mahoning Drive-In often feel like events. Films are shown in double and triple features, sandwiched between older (and often bizarre) movie trailers. You might take in “Escape From New York” and “Invasion U.S.A.,” which play after vintage church advertisements (“Worship at the church of your choice”) or an anti-cable-TV screed (“Don’t let pay TV be the monster in your living room”). It is, in the words of Mr. Schmidt, “a special place.”

The Mahoning Drive-In opened in 1949, part of a wave of drive-ins that became popular in America after World War II, first with parents and their young children, and then with teenagers who sought unchaperoned privacy. “Most teenagers didn’t have many places that they could go to be alone,” said John Irving Bloom, a drive-in historian. “The drive-in was one of those places.”

Mr. Bloom is the author of 11 books, including “Profoundly Disturbing: Shocking Movies That Changed History,” but he is better known as the redneck TV character Joe Bob Briggs, host of the popular horror movie showcase program “The Last Drive-In” (on AMC’s Shudder streaming service). Mr. Bloom’s show will shoot a live episode on July 17 at the Mahoning Drive-In. The movies he’ll present, as always, will be a surprise.

According to Mr. Bloom, drive-in attendance started to decline when multiplex theaters proliferated across the country. In the 1970s, many drive-ins survived by showing pornography, and by the 1980s, he said, most drive-in theater owners had sold their land to big-box stores like Walmart.

The Mahoning never went out of business. But by 2014, attendance was sometimes as low as 10 cars per show. An industrywide shift from film to digital projectors left the drive-in’s owners with a dire choice: either spend $50,000 for a new digital projector, which would allow the theater to show the latest movie studio releases, or stop showing new movies altogether. Many owners would have either begrudgingly put up the money or folded outright — but Jeff Mattox, the drive-in’s longtime projectionist, did something weirder. He bought the place and decided not to change a thing.

Much of the open-air theater’s equipment hasn’t changed since he arrived in 2001. Mr. Mattox estimated that he has had to replace only one gear in the theater’s film projectors, which date back to 1949. Replacing those old workhorses with digital projectors would change the Mahoning Drive-In’s fundamental character. “It would have ruined the whole drive-in look,” he said.

His conviction was infectious.

Two of the drive-in’s enthusiastic volunteer employees, Virgil Cardamone and Matt McClanahan, provided Mr. Mattox with a solution: abandon the new movies and exclusively screen older cult and genre movies, all shown on film prints rather than digital projectors.

Mr. Mattox was initially skeptical. Netflix was well on its way to domination, and a number of competitors were also launching apps. Who would come to a drive-in to see a movie they could stream at home? But he put his faith in keeping things retro.

The Mahoning Drive-In’s programming was only fitfully successful throughout its first two seasons, but word soon spread about themed programs like “Bite Night” — a Steven Spielberg double feature of “Jaws” and “Jurassic Park.” After that, the drive-in’s thousand-car lot began to fill up on a regular basis. The nearby Mahoning Inn motel started filling up with movie fans on weekends.

Since then, programming has become more eclectic thanks to the suggestions of Harry Guerro, a film collector from New Jersey who has lent the drive-in many features, shorts and trailer reels from his considerable collection.

Mr. Guerro, a founding member of the Philadelphia film programmers group Exhumed Films, suggested themed showings, like Zombie Fest and Camp Blood, which have gone on to be the Mahoning Drive-In’s most successful recurring events.

Though it’s the party atmosphere that gives the Mahoning its unique character, Mr. Guerro said he felt emboldened by its thriving fan base. He hopes to experiment more soon by showing more than just older horror movies, which he says are unquestionably the Mahoning Drive-In’s biggest draw.

Strictly speaking, he isn’t even an employee. But he’s nonetheless invested. “I mostly want to give people the opportunity to experience or re-experience films that I love on the big screen with an audience of like-minded individuals.”

Mr. Guerro is not the only one working with the Mahoning Drive-In who lives out of state. The theater’s manager, Mark Nelson, regularly commutes about two and a half hours from Dobbs Ferry, just north of New York City. He started volunteering at the drive-in 2015 and is now a paid employee. “I wanted to be a part of this wild, wacky thing,” Mr. Nelson said. “The staff were best friends, and the customers were just as crazy for films as the people working there.”

John Demmer, a carpenter from Nutley, N.J., works at the Mahoning Drive-In with his wife, Cindy, albeit as unpaid volunteers. The two, who are both 54, have built elaborate costumes, props and sets for customers and celebrity guests to take photos in since last year. They work closely with an amateur set designer named J.T. Mills who has volunteered at the Mahoning since 2018.

At this year’s TromaDance, the Demmers sat in lawn chairs next to a newly renovated drive-in speaker that Mr. Demmer found and repaired while antiquing in Detroit. They fondly recalled their first visit to the Mahoning Drive-In last year, when they dressed up as Willy Wonka and Veruca Salt for the annual opening-night double feature, “The Wizard of Oz” and “Willy Wonka and the Chocolate Factory.”

To celebrate their 35th anniversary, the Demmers visited the Mahoning Drive-In to rewatch “The Thing.” It was the first movie they had seen as a couple.

“You don’t just sit in a car and watch the movie,” Mr. Demmer said. “You actually become part of the entertainment. You could argue that seeing the movie is secondary to being there with your friends.” Mrs. Demmer agreed and said she was looking forward to the upcoming Joe Bob Briggs screenings — a “major recognition” for the drive-in and its staff.

There was such a high demand for “Joe Bob’s Jamboree,” in fact, Mr. Mattox said, that Ticket Leap, the Mahoning Drive-In’s online vendor, crashed soon after tickets for the event were released. Two of the event’s four evenings sold out immediately after the website was restored.

When Mr. Bloom shows up as Joe Bob Briggs at the Mahoning Drive-In this month, it will be his first visit, but he already understands the outdoor theater’s appeal. “It’s partly nostalgia, but it’s also partly because people now live on the internet,” he said. “They make friends on the internet, but they never meet these friends. So now people go to the drive-in to meet people that they already know.”