Edward I. Koch looked like the busiest septuagenarian in New York.

Glad-handing well-wishers at his favorite restaurants, gesticulating through television interviews long after his three terms as mayor, Mr. Koch could seem as though he was scrambling to fill every hour with bustle. He dragged friends to the movies, dabbling in freelance film criticism. He urged new acquaintances to call him “judge,” a joking reference to his time presiding over “The People’s Court.”

But as his 70s ticked by, Mr. Koch described to a few friends a feeling he could not shake: a deep loneliness. He wanted to meet someone, he said. Did they know anyone who might be “partner material?” Someone “a little younger than me?” Someone to make up for lost time?

“I want a boyfriend,” he said to one friend, Charles Kaiser.

It was an aching admission, shared with only a few, from a politician whose brash ubiquity and relentless New York evangelism helped define the modern mayoralty, even as he strained to conceal an essential fact of his biography: Mr. Koch was gay.

He denied as much for decades — to reporters, campaign operatives and his staff — swatting away longstanding rumors with a choice profanity or a cheeky aside, even if these did little to convince some New Yorkers. Through his death, in 2013, his deflections endured.

Now, with gay rights re-emerging as a national political tinderbox, The New York Times has assembled a portrait of the life Mr. Koch lived, the secrets he carried and the city he helped shape as he carried them. While both friends and antagonists over the years have referenced his sexuality in stray remarks and published commentaries, this account draws on more than a dozen interviews with people who knew Mr. Koch and are in several cases speaking extensively on the record for the first time — filling out a chapter that they say belongs, at last, to the sweep of history.

It is a story that might otherwise fade, with many of Mr. Koch’s contemporaries now in the twilight of their lives. 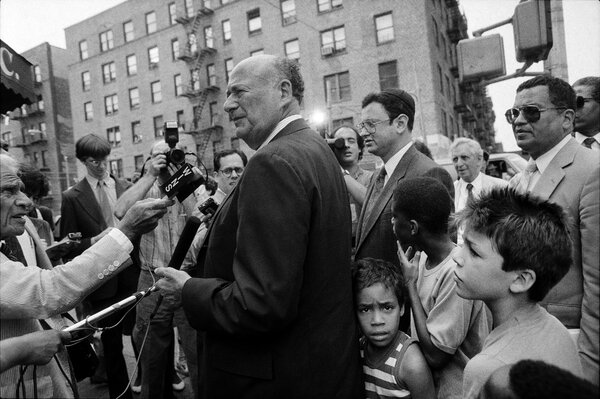 The people who described Mr. Koch’s trials as a closeted gay man span the last 40 years of his life, covering disparate social circles and political allegiances. Most are gay men themselves, in whom Mr. Koch placed his trust while keeping some others closest to him in the dark. They include associates who had kept his confidence since the 1970s and late-in-life intimates whom he asked for dating help, a friend who assisted in furtive setups for Mr. Koch when he was mayor and a fleeting romantic companion from well after his time in office.

The story of Mr. Koch that emerges from those interviews is one defined by early political calculation, the exhaustion of perpetual camouflage and, eventually, flashes of regret about all he had missed out on. And it is a reminder that not so long ago in a bastion of liberalism, which has since seen openly gay people serve in Congress and lead the City Council, homophobia was a force potent enough to keep an ambitious man from leaving the closet.

This story, exploring the dual lives of Ed Koch, who was one of the most popular mayors in New York history, has never been fully told.

It explores the personal toll of a compartmentalized life, and the tradeoffs between ambition and honesty that shaped Koch’s political career and his life.

Our reporters conducted dozens of extensive interviews with Koch’s contemporaries, his friends and his former staffers, capturing the political dynamics of the era and the loneliness Koch experienced later in life.

The story is also a piece of social history, showing how, not too long ago, homophobia — even in the fervently liberal city of New York — all but prohibited ambitious political figures from being open about their sexual orientation.

This unwritten chapter in the Koch biography was especially urgent for us to do now, given that many of those who know the story best are elderly.

It is also especially resonant at this moment, as we watch openly gay politicians rise on the city and national stage, and gay rights once again become the center of major national debates.