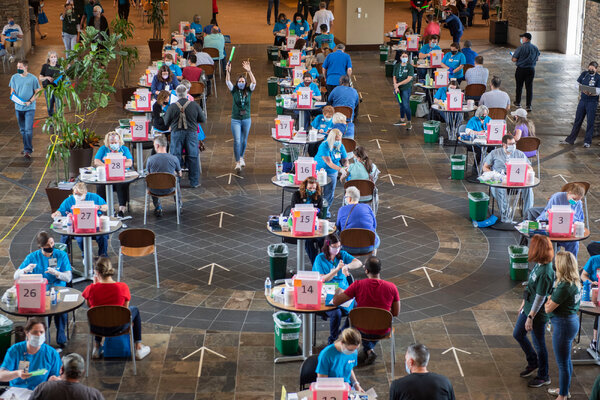 The state of Pennsylvania and the city of Los Angeles are accelerating plans for wider Covid-19 vaccine eligibility this week, as the United States approaches universal eligibility for adults.

Most states and U.S. territories have already expanded access to include anyone over 16. Others, including Massachusetts, New Jersey, Oregon and Washington state, have plans in place for universal adult access to start in the next few days. All states are expected to get there by Monday, a deadline set by President Biden.

Some states have local variations in eligibility, including Illinois, where Chicago did not join a statewide expansion that began Monday.

California as a whole has set Thursday as its date, but Mayor Eric Garcetti of Los Angeles said on Sunday that all residents age 16 or older in his city, the nation’s second largest, would become eligible two days earlier. In Pennsylvania, Gov. Tom Wolf said on Monday that all adults there would be eligible on Tuesday, six days earlier than previously planned.

“We need to maintain acceleration of the vaccine rollout, especially as case counts and hospitalization rates have increased,” Mr. Wolf said in a statement.

Expanded eligibility has not always brought immediate access. Demand for vaccination continues to outstrip supply in much of the nation, with people scrambling to book scarce appointments as they become available. And supplies of Johnson & Johnson’s one-dose vaccine will be extremely limited until federal regulators approve production at a Baltimore manufacturing plant with a pattern of quality-control lapses, the White House’s pandemic response coordinator said on Friday.

“We urge patience as we continue to ramp up our operations, obtain more doses, and enter this new phase of our campaign to end the pandemic,” Mr. Garcetti said.

More than 119 million people — or more than one-third of the U.S. population — have now received at least one dose of a Covid-19 vaccine, according to the Centers for Disease Control and Prevention. The nation is administering about 3 million doses a day on average.

When All Adults Are Eligible for the Vaccine in Each State