Victor L. Vescovo had been sitting for several hours inside a small metal ball some 21,000 feet below the surface of the Philippine Sea last month when bright orange specks began appearing on his computer screen. His sonar had found several small pieces of … something.

“They looked like wreckage,” recalled Mr. Vescovo, who spent 20 years in the U.S. Navy before founding an underwater exploration company, Caladan Oceanic.

The specks were indeed the first sign that Mr. Vescovo and his team had located what they were looking for in the waters off the Philippines: the wreckage of what was thought to be the U.S. Navy destroyer Johnston, which was sunk by Japanese warships during World War II. The confirmation of the ship’s identity was cheered last week by the Navy.

The shipwreck, at a depth of more than 21,000 feet — more than four miles underwater — is the deepest ever recorded, according to the explorers.

The Johnston sank on Oct. 25, 1944, during the pivotal Battle of Leyte Gulf, widely considered the largest naval battle of World War II. The ship was part of a small U.S. task unit confronting a larger Japanese force that was threatening to cut off the supply lines for an amphibious landing led by Gen. Douglas MacArthur on the strategic island of Leyte in the Philippines. 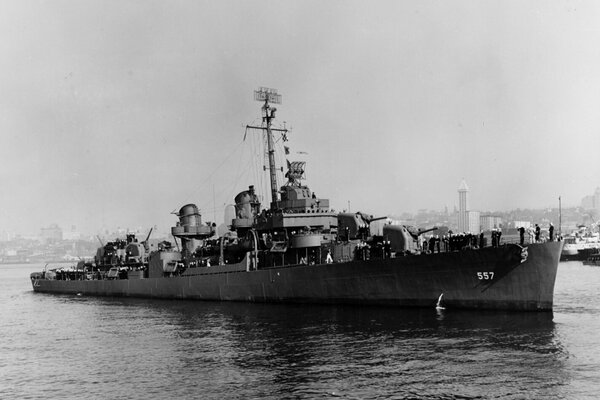 The Johnston’s captain, Cmdr. Ernest E. Evans, sacrificed his ship and “charged into a massive line of Japanese warships in order to protect the American landing force,” according to the Naval History and Heritage Command. The Johnston was badly damaged by enemy fire and eventually sank.

Of the ship’s 327 crew members, 186 were lost, including Commander Evans, according to the command. He later became the first Native American in the Navy to receive the Medal of Honor, and he was posthumously awarded the Bronze Star and the Purple Heart.

The remnants of the Johnston were first discovered in 2019 by another team of explorers, using a remotely operated vehicle at 20,000 feet below the surface, about the vehicle’s depth limit. But certain parts of the wreckage, including the ship’s hull number, 557, lay beyond that depth. Navy historians said at the time that they needed to do more research to determine if the wreckage was the Johnston or another destroyer that sank on the same day, the U.S.S. Hoel DD-533.

The two-person submersible piloted by Mr. Vescovo “has no operating depth limitation,” allowing it to go farther than the vehicle used in 2019, according to Caladan Oceanic.

The others on the mission were Parks Stephenson, a retired lieutenant commander with the U.S. Navy; and Shane Eigler, a senior submarine technician.

Last month, Mr. Vescovo and his team came up empty-handed on two dives. But on a third attempt, something new emerged: “the very sharp pointy end of the bow of the ship,” Mr. Vescovo said during a telephone interview this week from his home in Dallas. “We were just stunned at how intact it was.”

Mr. Vescovo, who was with Mr. Eigler on the dive, slowly steered his submersible to the side of the ship, and, “There it was, bright white numbers, on the hull: 557,” he said. “I turned to my co-pilot, because I was very busy piloting the sub and making sure that we were safe, and I said, ‘Get a picture! Get a picture!’”

It was, he later wrote on Twitter, “an extremely intense experience.”

On their fourth dive, they took more pictures and video, which showed two five-inch gun turrets, twin torpedo racks and several gun mounts on the ship. And, of course, the giant 557. “Imagery from the site clearly shows the ship’s hull number 557 confirming the identity of the wreck,” the Naval History and Heritage Command said in a statement on April 1.

The trip to the wreckage of the Johnston was not Mr. Vescovo’s first headline-making dive. In 2019, he declared that he had made the deepest-ever dive by a human being, after piloting a submersible into Challenger Deep, a spot nearly seven miles down in a long fissure in the western Pacific.

(That claim was disputed by James Cameron, the Hollywood director of “The Abyss” and “Titanic,” who is also a diving devotee and explored the Challenger Deep during a 2012 expedition.)

Mr. Vescovo, who has also climbed Mount Everest and skied the North and South Pole, said this week that he would soon start training for his next adventure: “a significant mountain climb this fall.”

So, which does he prefer, mountain peaks or ocean floors? He said he had heard that “people are either ocean explorers, like Jacques Cousteau or whomever, or they’re mountaineers, but no one does both.”

But he disagrees: “I believe that everything is kind of connected. The mountains and the oceans are like two sides of the same coin, to me.”