Randi Weingarten, the nation’s most powerful teachers union president, has a message: She wants to get students back in the nation’s classrooms.

She spends 15 hours per day on the phone, she says — with local labor leaders, mayors, the White House, the Centers for Disease Control and Prevention — trying to figure out how to reopen the three-quarters of school systems that remain fully or partially shuttered.

But with the pandemic approaching its first anniversary, and a new president — a union ally — vowing to reopen elementary and middle schools within his first 100 days, she faces a difficult truth: In the liberal cities and suburbs where schools are most likely to remain closed, teachers unions are the most powerful forces saying no, not yet.

Not before teacher vaccinations, they say, or upgraded school ventilation systems, or accommodations for educators with vulnerable relatives.

The Chicago union had ground reopening to a halt before reaching a tentative deal Sunday with Mayor Lori Lightfoot, averting a strike and agreeing to return K-8 students to classrooms by early March. The Philadelphia local is threatening to refuse to enter school buildings this week.

And California unions have left that state’s Democratic governor, Gavin Newsom, so frustrated that in a recent meeting he lashed out, saying, “If everybody has to be vaccinated, we might as well just tell people the truth: There will be no in-person instruction in the state of California.” 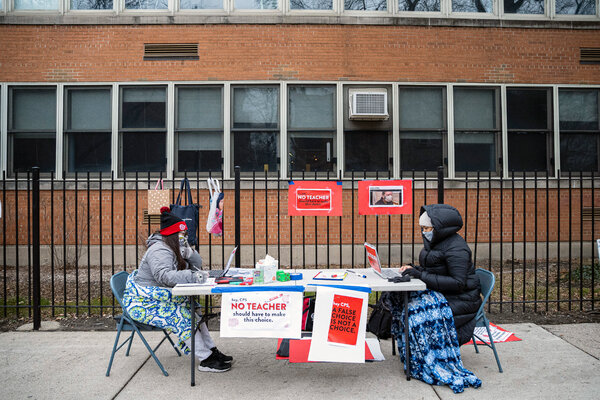 That puts Ms. Weingarten, leader of the 1.7-million-member American Federation of Teachers, the nation’s second-largest teachers’ union and a close ally of President Biden, in a tight spot. Responsive to her 3,000 locals, which sometimes push her from the left, she is also sensitive to a situation so historic as to be difficult to comprehend: For 10 months, tens of millions of children have had no access to in-person public education.

Young children unable to learn productively via screens, low-income students without reliable home internet, those with disabilities and other vulnerable groups have been hit hardest from lack of access to the academics and social services only school buildings can provide.

“We have to get this done,” Ms. Weingarten said of resuming in-person education — something she thinks can be accomplished safely even before teachers are widely vaccinated, provided certain conditions are met, such as in-school virus testing.

What she needs, she said, is just a bit more time to bring her rank and file along with her. “I’m confident that we will overcome the fear,” she said. “But it’s not going to happen in two-and-a-half nanoseconds.”

Whether she can do so will be a major test of her own leadership, and of her ability to deliver a win for Mr. Biden, who has said open schools are critical both for children and the economy. Still, Mr. Biden and his surrogates have shown little willingness to speak forthrightly about union recalcitrance.

Teachers, Ms. Weingarten says, have good reasons to be anxious.

They don’t trust soap and running water will always be available in schools, because they sometimes haven’t been. They don’t trust that extra funding will materialize for masks, hand sanitizer and nurses, because in so many other years, budgets were cut.

When President Donald J. Trump told them to get to work last summer, even as he refused to take aggressive action to control the pandemic, they were furious. Some protested with coffins, arguing that they could not teach if they were dead. Others said they would strike if forced to work in person before 14 days had passed in their regions with zero new coronavirus cases — essentially, until the end of the pandemic.

Other essential workers, both unionized and non-unionized, accepted the risks of working outside their homes, even as they protested the lack of N95 masks and other safety measures. But teachers were primed for a fight.

During the Trump era, they had launched a successful and widely admired national protest movement, RedforEd, to demand higher pay and public school funding. A wave of teacher walkouts in 2018 and 2019 attracted broad public support, including from the parents whose lives were disrupted by strikes.

When the coronavirus swept the nation last year, teachers knew their power.

“You cannot say, ‘Well, half a loaf in a pandemic is going to be good enough,’” Ms. Weingarten said. “Half a loaf is what teachers have been dealing with for most of their lives.”

Starting in the fall, politics became a major predictor of whether a county’s schools were open. Even today, support for Mr. Trump is associated with in-person school. In Democratic-leaning America, where unions are powerful, classrooms are often empty.

A body of international research now suggests that in-school transmission of Covid-19 can be effectively mitigated with precautions such as masks and social distancing, especially where local virus rates are controlled. But with the emergence of dangerous new variants and a slow vaccine rollout, teachers remain skeptical.

Can Ms. Weingarten, 63, reassure them?

The A.F.T. represents some of the biggest districts in cities that dominate education politics, like New York, Chicago and Washington. Another A.F.T. local, in San Francisco, also reached a tentative deal on Sunday to establish health and safety guidelines for reopening schools.

Ms. Weingarten was inspired to get involved in union activism as a teenager, when she saw her mother, a teacher, go on strike in Rockland County, a northern suburb of New York City.

Her first job in organized labor was as a lawyer for the A.F.T.’s New York City local, the United Federation of Teachers. She led that union from 1998 to 2009, during a period of extraordinary conflict with Mayor Michael Bloomberg and his hard-charging schools chancellor, Joel Klein. The two men sought to expand the city’s largely non-unionized charter schools and use student standardized tests to evaluate teachers.

Ms. Weingarten became known for both ruthlessly representing her members’ traditional interests and subtly nudging her union toward compromise on hot-button issues such as teacher evaluation. She is a small person unafraid to take up space when she speaks. As she argues a point, she gesticulates broadly, leans forward and occasionally pounds the table.

Dan Weisberg, who was chief of labor policy for Mr. Bloomberg’s Department of Education, faced off against Ms. Weingarten in an attempt to streamline due process for underperforming teachers. He won only limited concessions.

“She will argue very vigorously and very emphatically, no question about it. And there are times when, sure, she will be accommodating and charming,” Mr. Weisberg said. But at the end of the day, “We didn’t get the more fundamental changes we thought we needed.”

She is the first openly gay president of a major national union, and a power broker in the Democratic Party, because of her union’s prowess in raising money and mobilizing workers for campaigns. In the 2020 Democratic presidential primary, when many of the A.F.T.’s activist members supported Senators Bernie Sanders and Elizabeth Warren, she steered the national union toward declaring three candidates acceptable: Mr. Biden, Mr. Sanders and Ms. Warren.

In the days leading up to the Chicago reopening deal, Ms. Weingarten worked her flip phone from her Manhattan home, translating between the mayor, schools chief executive and local union leaders.

“If Randi has a relationship with someone, then those calls are helpful, especially if there is a disagreement or a situation where the parties are stuck,” Ms. Tang said. Boston began a phased-in reopening last week, and is scheduled to invite all students back to classrooms by April 1.