For weeks, thousands of people have crowded the streets of Colombia protesting a tax overhaul proposed by the country’s president, Iván Duque, believing the changes would threaten survival in an economy that is already fractured by the pandemic.

Mr. Duque has deployed the country’s military and police forces, and more than 40 people have died.

On April 28, during a demonstration in Bogotá, three young dancers confronted their fear of violence there through the ultimate expression of life: dance.

Piisciis, or Akhil Canizales, 25; Nova, or Felipe Velandia, 25 — both of whom identify as nonbinary — and Axid, or Andrés Ramos, 20, who is trans, were recognized by other protesters in the crowd because of a viral video of them dancing that they posted to social media two weeks before.

“We decided to go out to protest for our human rights but also for there to be some visibility for the L.G.B.T.Q. and nonbinary community,” Piisciis said.

As they inched closer to the Capitolio Nacional or the national capitol in Plaza Bolívar, the main square in Bogotá, a woman suggested to Piisciis that the three of them walk up to the steps of the plaza and dance as they had in their viral video. There was one problem: the riot police officers swarmed at the top of the steps.

“We were very scared because everyone in Colombia is afraid of ESMAD,” Piisciis said in an interview, referring to the Escuadrón Móvil Antidisturbio, or Mobile Anti-Disturbances Squadron. “They are violent and aggressive with us.”

Wearing yellow caution tape that read “peligro,” meaning danger, loosely wrapped around their torsos as tube tops, and black pants, heels, a black ski mask for Nova and a long blond wig on Axid, they climbed up to the landing.

“We went up there so afraid,” Piisciis said. “The truth is that in that moment we were frightened because we didn’t know when someone would throw a rock or an explosive at us or if the police would beat us.”

When Nova, Piisciis and Axid reached the top landing of the Capitolio, music started to play. It was “Por Colombia Hasta el Fin,” a guaracha song that Piisciis made for the protest. By the time the riot police noticed, they were already vogueing.

At the first break of the song, as seen in a video that also circulated widely, Piisciis, Nova and Axid began to wave their arms and hips simultaneously; left, right, left, left. It was the classic vogue catwalk. They then shook their heads to the beat, flipping their hair forcefully.

As officers wearing riot gear began to surround the trio, they cunningly slipped by and walked closer to the crowd while making sensual hand movements. The crowd erupted in cheers.

As more officers encircled the group, Nova crouched and began to shuffle to the beat, inching closer to the officers. Their arms and hands elegantly stretched and folded in rhythm, with fingers fanned out in front of their face like baroque embellishments. It was the ballroom duckwalk.

Axid was handed a large Colombian flag by a stranger and began to wave it, as Piisciis also duckwalked closer to the protesters. Piisciis then got on their feet and twirled their body vigorously, their hair furiously following. Suddenly, Piisciis stopped mid-twirl, bent one knee while keeping the other straight, and fell straight to the floor, on their back. The iconic dip.

The duckwalk, twirl, hand movements and dip all came from modern ball culture, a world away. 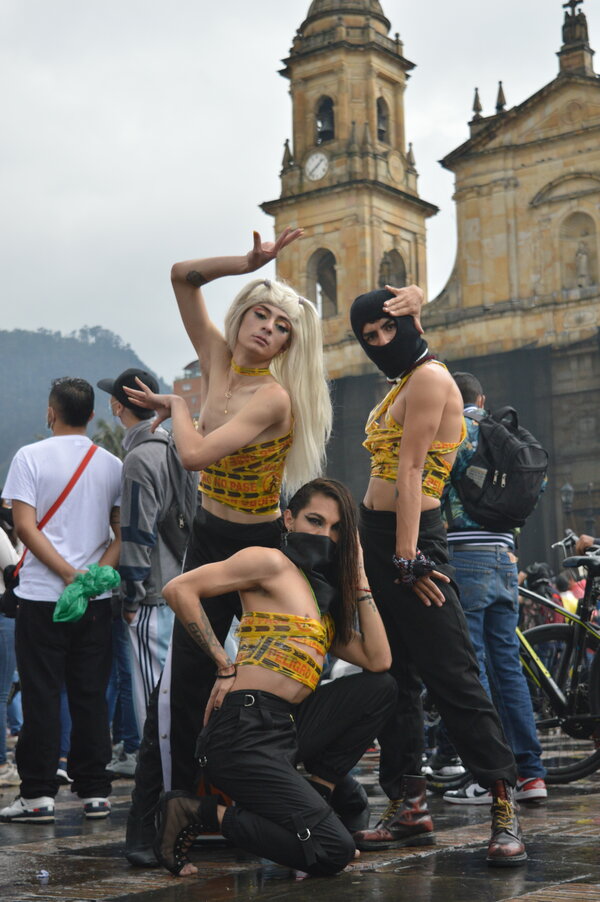 Drag ballroom first sprouted in Harlem in the 1970s. It was a sanctuary for L.G.B.T.Q. Black and Latino people who had been ostracized from mainstream white society. Ballroom was a grand world they imagined and brought to life.

Competitions at drag ball events fostered community between different marginalized groups. While many were not welcomed in nightclubs or bars at the time, they could turn up at a ball as they were, and then some, and turn it out.

At the protest in Bogotá, dancing in this tradition allowed Piisciis, Nova and Axid to demand international visibility in a country hostile to their identities, they said.

“In that moment we were all connected in the message of the struggle, the resistance, empathy, strength and love,” Piisciis said.

Nova said: “We resisted with art and vogue. We were scared, but the people and the love from the public was our gasoline to go up there and confront the police.”

Piisciiss learned how to dance in this way by watching videos on YouTube. They started in 2014 and learned the modern New York style, they said. They watched videos of Leiomy Maldonado, a judge on the HBO Max ballroom competition television show, “Legendary,” and of many other modern dancers like Yanou Ninja and Archie Ninja Burnett. At the beginning of the year, Piisciis held a dance class where they met Nova and Axid. Piisciis then taught Nova.

Modern ballroom culture in Colombia is growing, Nova said. “It is very new, only five years old, but during that time it’s grown and expanded into cities like Medellín, Cúcuta, Pereira and other cities.”

Still, they are often denied space to perform, Piisciiss said. The group is hoping to break down barriers and spread vogue through their country.

“We want everyone to talk and ask about vogue,” Piisciis said. “They think it only exists in the United States, that is why we are here: to show that it isn’t only on television or fiction.”

“It exists here in Bogotá.”