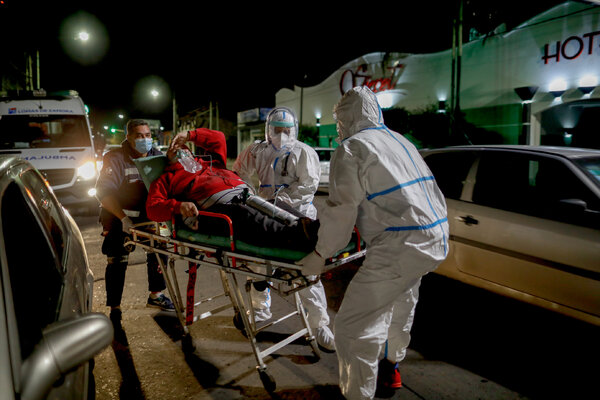 RIO DE JANEIRO — The World Health Organization is urging the wealthy nations that recently pledged to donate one billion Covid-19 vaccine doses to give priority to Latin American nations with high levels of virus transmission and mortality.

Nine of the ten countries with the most recent deaths in proportion to their populations are in South America or the Caribbean, where vaccination campaigns are mostly off to slow and chaotic starts.

Health care professionals in the region are reporting a surge of younger patients requiring hospitalization, and in several cities, intensive care units are full or nearly so, according to Dr. Carissa F. Etianne, director of the Pan American Health Organization, a part of the W.H.O.

About 1.1 million new coronavirus cases and more than 31,000 deaths were reported last week in the Americas, most of them in South American nations where transmission remains out of control.

Colombia set new records for reported deaths three days in a row this week, peaking on Tuesday with 599 deaths. Brazil is on track to reach the grim milestone of 500,000 total deaths in the next week or two, and is reporting more than 70,000 new cases a day on average. Though Chile has carried out one of the world’s most aggressive inoculation campaigns, it has not yet managed to rein in transmission.

Dr. Etianne urged leaders of the major industrial democracies to use epidemiological criteria to determine which countries will be first in line to receive the one billion vaccine doses that the Biden administration and allied nations pledged to distribute.

“While vaccines are needed everywhere, we hope G7 nations will prioritize doses for countries at greatest risk, especially those in Latin America that have not yet had access to enough vaccines to even protect the most vulnerable,” she said.

W.H.O. officials said that focusing on the countries where the crisis is worst — including Colombia, Brazil, Argentina and Chile — made sense from both a moral and a pragmatic standpoint. Large sustained outbreaks in those countries raise the potential for more dangerous virus variants to emerge and to cross borders.

“No region of the world is protected from new peaks of transmission,” said Dr. Sylvain Aldighieri, the Covid-19 incident manager at the Pan American Health Organization. “No country and no region will be safe until high vaccination coverage is reached.”