When Andrew Yang parachuted into the New York City mayor’s race from a losing presidential campaign, he was a known national quantity but unknown in the insular world of local politics.

He did not rise from a political club, had never run for local office and had no established base of financial or political support in the city. He had never even voted in a mayoral election.

But he had one major asset working in his favor: He had joined forces with Bradley Tusk, a powerful New York political strategist, lobbyist and venture capitalist whose investments could hinge on government action.

Mr. Yang leads most early polling in a race for mayor that is less than seven weeks away. But Mr. Tusk’s personal business concerns could present significant potential conflicts of interest should Mr. Yang be elected mayor.

Mr. Tusk, 47, has an expansive political and financial portfolio. He worked for Senator Chuck Schumer as his communications director, was a special adviser to Mayor Michael R. Bloomberg and then became deputy governor of Illinois, under Gov. Rod Blagojevich. He also has an eclectic mix of investments: His venture firm lists interests in high-profile companies like Bird, the electric scooter company; Coinbase, a cryptocurrency company; and Latch, a company that makes keyless entry systems for homes.

He also has a well-known penchant for self-aggrandizement: His 2018 book is called “The Fixer: My Adventures Saving Startups from Death by Politics.” He describes various exploits, including how he helped Uber ward off government regulations — though some of his colleagues have said that he has taken more credit than he deserves. Nonetheless, because he took equity in the company in exchange for consulting advice, he ultimately cashed out for what some reports estimate as $100 million.

And now he is advising a candidate with a total absence of government experience — so much so that Mr. Tusk recently called Mr. Yang an “empty vessel.”

“Tusk could essentially be the shadow mayor for New York, while he is representing the interests of big corporate clients,” said John Kaehny, executive director of the good-government group, Reinvent Albany.

After The New York Times sought comment from Mr. Yang’s campaign, Mr. Tusk posted a 1,000-word statement on Medium blaming his political opponents for rumor-mongering, and outlining policies that he and his team would follow should Mr. Yang win the election.

“If we win, I will not lobby or talk with the new mayor — nor anyone in a Yang administration — on any matter that intersects with our work,” he wrote on Thursday. 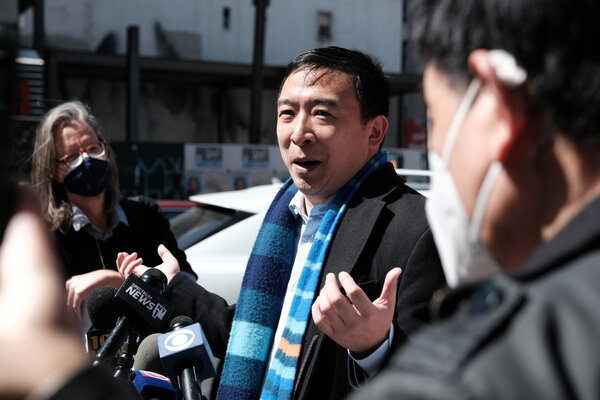 Voters who like Mr. Yang and his upbeat vision for the city’s recovery might not know Mr. Tusk’s name. His closeness to big business and connections to Mr. Bloomberg have led some Democrats to worry that Mr. Yang will embrace a Wall Street-centric vision for New York City.

“Tusk spent the past decade defending billionaires and corporate interests,” said Monica Klein, a progressive political strategist. “If Yang won, there’s no question his agenda would mirror Tusk’s — and most New Yorkers aren’t looking for a mayor that will cater to the wealthy and corporations.”

Mr. Tusk’s firm has proudly represented clients whose policies run afoul of Democratic orthodoxy: the hard-charging police union; a Republican who ran for New York attorney general; and the organizers of a campaign to preserve an admissions exam that has resulted in the enrollment of only tiny numbers of Black and Latino students in New York City’s elite high schools.

Mr. Yang said he would not be influenced by his strategist. “I chose Tusk because they are experts in NYC politics,” he said in a statement relayed by Chris Coffey, who works for both Mr. Yang and Tusk Strategies. “New Yorkers know I’ve always been independent and have my own vision — I wrote a book in 2018 that spells out my agenda quite clearly. If elected, my decisions will be mine alone.”

Mr. Yang has done little to allay concerns over conflicts of interest. He does not have his own office — his staffers work from home when they are not in the field — but he uses Mr. Tusk’s office for storage. He has also repeatedly embraced stances that would benefit both Mr. Tusk’s investments and his lobbying clients.

Mr. Yang has long been a fan of Bird, the e-scooter company that Mr. Tusk has an ownership stake in and that is participating in a city-governed program in the Bronx.

“Every once in a while a Bird scooter feels like the greatest invention in the world,” Mr. Yang tweeted in June 2019, before Mr. Tusk spoke to him about running for mayor.

Other ideas seem to have sprung more directly from the Tusk-Yang mind-meld.

One of Mr. Yang’s very first proposals after announcing his run for mayor was that the city should put a casino on Governors Island. Mr. Yang argued the city could reap financial benefit from the casino, with the added benefit of making New York City “more fun.” Critics immediately pounced, noting that the island in New York Harbor is a peaceful respite so ill-suited to gambling halls that they are expressly forbidden in the island’s deed.

Mr. Yang did not back down. Nor did Mr. Tusk, whose interest in casino investment is longstanding.

In 2018, his casino management company, then called Ivory Gaming, mounted a bid for a casino site in Las Vegas. He told Politico that if he won, he would put an ax-throwing facility inside the casino. The deal did not move forward.

Ivory Gaming ultimately spawned IG Acquisition Corp., a gambling concern that reportedly raised $300 million in the public markets to invest in the industry. Documents filed with the Securities and Exchange Commission indicate that Mr. Tusk’s publicly traded shell corporation is aiming to identify “businesses in the leisure, gaming and hospitality industries with an enterprise value exceeding $750 million, with particular emphasis on businesses that are well-positioned for growth.”

The casino issue in New York City is poised to become a major one for the next mayor. Starting in 2023, the state is expected to open bidding on three casino licenses for the area in and around New York City.

A spokesman for Mr. Tusk said he would have no role in a New York City casino and never had intended to.

In his Medium statement, Mr. Tusk said his involvement in Mr. Yang’s campaign is motivated by good intentions.

“We took on this campaign because we looked at the crisis facing this city, looked at the options of viable candidates and knew we could do a lot better,” he said.