EVERGLADES CITY, Fla. — On a good day, in a good year, a captain fishing off the shores of the Florida Everglades might catch 400 pounds of one of the state’s unrivaled delicacies, the stone crab.

These are not good days.

As the sun began to set on a recent cloudless afternoon, the kind that makes it unthinkable to spend winters anywhere but in Florida, Rick Collins piloted the High Cotton to a dock in Everglades City, the fishing village where three generations of his family have made a living trapping stone crab. His crew offloaded the day’s haul onto a huge scale. Seventy-three pounds.

“This is about the worst I’ve ever seen it,” said Mr. Collins, 69, a crabber for more than half a century.

Stone crabs are becoming increasingly tough to catch in Florida’s southern waters, the apparent victims of a prolonged toxic algae bloom known as red tide. Their disappearance from the Southwest Florida coast, where the red tide has hit hardest, has imperiled the livelihoods of experienced fishermen who have survived bad seasons before, but never such a lengthy downturn with no end in sight. 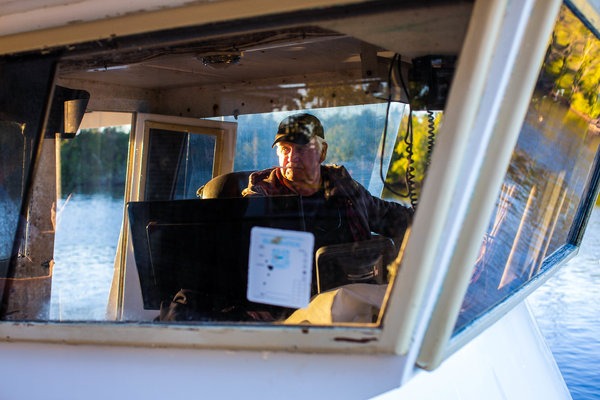 “People ask, ‘How’s the crab?’ and I say, ‘There ain’t any,’ and they think I’m kidding,” said Eddie Barnhill, 43, a third-generation crabber from Pine Island, off the coast of Fort Myers. The red tide “basically killed the ocean floor.”

The owners of Joe’s Stone Crab, the iconic South Beach restaurant and a leading force in the state’s stone crab industry, have raised their claw prices for the first time in three years — and, in an extraordinary step, removed claws as an entree option from fixed menus for large parties, offering Joe’s signature dish only as an appetizer.

What worries him is not that the red tide will lead to one lean season of stone crab (and sticker shock for tourists). It’s that the expansive bloom, which has been exacerbated by pollutants from the agriculture industry, will become a regular fact of life in Florida — a devastating consequence of unchecked human activity made worse by warming water temperatures in the state expected to suffer the most acute economic effects of climate change.

“We have got to protect this very important natural resource that we have,” Mr. Sawitz said. “We’ve got to do whatever it takes.”

Stone crab claws are a luxury commodity, freshly available for only seven months of the year and served on special occasions, including for Thanksgiving at Mar-a-Lago, President Trump’s Palm Beach estate. But they help employ an industry of fishermen who are the first ones to struggle when the catch drops.

Naturally occurring red tide takes place off the state’s coast almost every year. But it rarely lasts this long — more than a year — and scientists say this one, which has killed off significant numbers of fish, sea turtles, manatees and dolphins, has been powered in part by a toxic freshwater blue-green algae bloom in Lake Okeechobee. The blue-green algae, which grows when stagnant warm waters get nutrients from runoff agricultural fertilizers, flowed down the Caloosahatchee River into the Gulf of Mexico, where it mixed with red tide.

In the 1970s, scientists studied the effect of red tide on stone crabs and found little to worry about, said Dr. Ryan L. Gandy, the lead crab research biologist at the Florida Fish and Wildlife Conservation Commission. “It was always assumed that stone crabs survived red tides pretty well, and usually there wasn’t a problem.”

But no one had looked into the effect of prolonged exposure to the toxic algae, which consumes oxygen at night, depriving the sea life below. Stone crabs, which are small and less adept swimmers than blue crabs, use their relatively large claws to scuttle along the ocean floor away from the red tide, and they can survive short periods without oxygen in the water, Dr. Gandy said.

“But when it’s prolonged day after day, it begins to weaken them,” he said.

Earlier this year, Dr. Philip Gravinese, a crustacean researcher at the Mote Marine Laboratory and Aquarium in Sarasota, exposed stone crabs to the toxic algae for an extended period and found that not only did their mortality increase, but also that high concentrations of the algae also killed off crab larvae.

“This might have implications for two or three years down the road,” he said.

Some fishermen are unwilling to wait that long for their catch to improve. The world of crabbers is tight-knit, and several fishermen in the Florida Keys and Everglades City pointed to Mr. Barnhill, the third-generation crabber in Pine Island, as a symbol of the pain they have suffered. Mr. Barnhill sold his boat last summer and more than 8,000 traps this summer; he has turned his fish house into an ice house, to supply bagged ice commercially.

“I can’t survive in the fishing business,” he said. “I used to run 50 miles one way to go crabbing, and there ain’t crabs there now. There’s crabs 150 miles out, but you can’t do that in one day.”

Stone crab claws must be cooked dockside on the same day they are caught or they will spoil, which is why the robust season this year north of Tampa, away from the red tide, means little to fishermen who cannot get there and back in time on their boats. (Fishermen remove claws from live crabs and then return the animals to the water to regrow them. Scientists and even fishermen admit the process is stressful for the creatures, which don’t always recover.)

Mr. Barnhill said his father also sold his traps this year. “It’s not just an average, ordinary red tide. There’s something a lot bigger and way worse,” he said, noting mullet and other fish have also been killed off. “There’s a lot of poor fishermen that are starving to death right now, and there ain’t nobody lifting a hand to try to help.”

Mr. Sawitz, the owner of Joe’s, said the restaurant routinely lends money to crabbers who work for them at Ernest Hamilton Stone Crab in Everglades City and Keys Fisheries in Marathon, helping to fix their boats and replace broken engines before the season begins in October. His fishermen catch about 20 percent of all of the stone crab caught in the state each season, Mr. Sawitz said.

“Supply in South Florida has been off probably 40 percent,” he said.

Joe’s, which employs 420 people in Miami Beach, goes through more than 1,000 pounds of stone crab a day. On a recent Friday, a single pallet — instead of three or four — arrived from Everglades City. Some customers have been upset when the kitchen has run out of a particular size of claw, said Brian Johnson, the restaurant’s general manager.

In Everglades City, where a small sign in front of City Hall reads, “Stone Crab Capital of the World,” Randy Moreno, who runs the Hamilton fishery, estimated that it costs captains about $1,000 a day to pay for bait, fuel and a crew. “If they don’t get 100 pounds on any given day, they’re in the hole,” he said.

Last season, boats averaged a daily catch of 300 to 400 pounds, and a crew caught nearly 1,000 pounds once. This year, the biggest single catch has been 470 pounds, Mr. Moreno said.

But some of the fishermen don’t want to say they are worried just yet.

“It’s just one of those things. It goes around in circles,” said Mr. Collins, the local fisherman, who caught 73 pounds on the same day that his son caught 105 pounds. “Next year maybe they’ll be crawling up on the street!”

Call it a fisherman’s undying optimism.

“If they were going to stress about it,” Mr. Moreno said, “they wouldn’t go crabbing.”