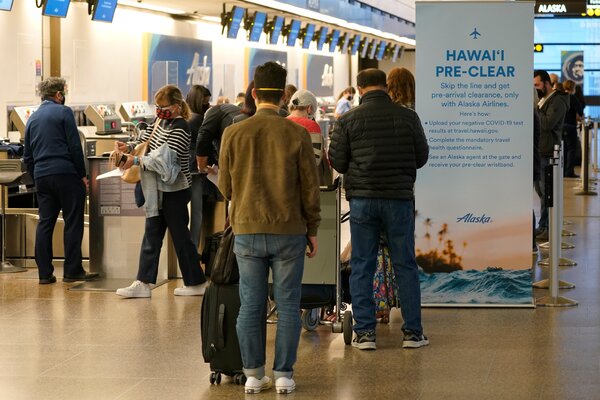 Palakiko Chandler took their little cousins to Nanakuli Beach on Oahu last weekend and noticed something they hadn’t seen in a while: a parking lot full of rental cars. The tourists were back.

“It was just so packed,” said Mr. Chandler, 27 and a Native Hawaiian. “Me and my cousins were looking at each other like, should we just go home?” The youngest cousins needed several reminders to keep their distance from strangers for virus safety.

For much of the pandemic, Hawaii had some of the strictest rules for visitors in the United States, requiring a 14-day quarantine for everyone arriving in the islands. The policy took a heavy economic toll on a state that depends heavily on tourism, but it was lauded for its success in limiting the impact of the virus for months.

Now, though, Hawaii has reopened for travelers: A negative test within 72 hours of arrival lets them skip the quarantine in most places. At least 28,000 people arrived in Hawaii on each of the last two Saturdays, according to state travel data —  the most in a day since the pandemic began, and not far from typical prepandemic levels.

The influx has residents worried. Some have been posting on social media for months, pleading with mainlanders not to come, or if they do, to be mindful of the islands’ isolation and limited resources. The state has a total of 3,000 hospital beds for its population of 1.4 million, and has among the fewest I.C.U. beds per capita of any state; they were often mostly full even before the pandemic.

Hawaii’s precautions did not keep the virus out completely: The islands had a holiday surge, like the rest of the country, and parts of the state are struggling with outbreaks now. Daily new case reports have doubled since late February, with some recent clusters focused on tourism workers. Hospitalizations have increased 17 percent in the last two weeks.