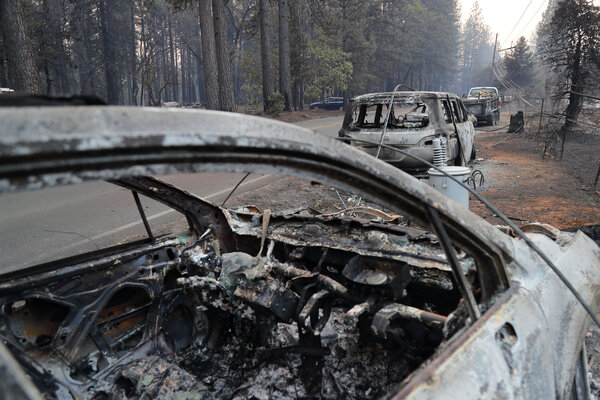 More than the videos of flying embers and glowing red skies, the images that still haunt me from the 2018 Camp fire are of cars lined up along exit routes, as people desperate to escape discovered they were trapped.

The fire destroyed the town of Paradise and killed 85 people, becoming the deadliest fire in California history. It’s a tragedy that raises an important question as California’s fire season appears to worsen each year: Can we predict the next Paradise?

There are a few ways to think about this, from looking at a region’s risk of megafires to its number of evacuation routes.

California officials rank an area’s wildfire risk — based on its vegetation, fire history and topography — as either moderate, high or very high. More than 2.7 million Californians live in parts of the state deemed very high risk, painted in bright red on the state’s wildfire danger map.

“These designations have proven eerily predictive about some of the state’s most destructive wildfires in recent years,” reads a 2019 analysis put together by several California newsrooms, pointing out that “nearly all of Paradise is colored in bright red.”

California is home to more than 75 communities, including Paradise, where at least 90 percent of residents live in these very high-risk swaths, the analysis found. The extremely fire-prone towns include:

But there’s more to the story. This list covers places where a fire is most likely to break out, but it doesn’t reflect what happens once one does.

There were six exit routes in Paradise, but the fast-moving fire closed some and mass evacuations created traffic jams on the roads that were usable.

(It’s important to note that while traffic slowed evacuations in Paradise, fewer than 10 people who died were in their cars apparently trying to flee, according to an investigation by the Butte County district attorney. Most of those killed were older people in their homes.)

Across California, approximately 350,000 people live in fire zones that have no more evacuation routes per person than Paradise, according to the 2019 analysis. The places with relatively few exit routes include:

Still, there are some important caveats here.

Just because there are exit routes doesn’t mean people will actually use all of them. In an emergency, many people are likely to opt for roads they know best, which could lead to traffic jams on the more popular ways out of town.

So this summer, StreetLight Data, an analytics company in San Francisco, did a slightly different analysis.

Its researchers tallied exit routes in each community and measured their typical traffic loads using GPS data from cellphones. That allowed them to predict which routes people would be most likely to take during an evacuation.

StreetLight identified 15 places in California with more constrained evacuation routes than Paradise, ranging from some of the state’s most expensive gated neighborhoods to remote logging towns.

“It really cuts across income levels and terrain,” Martin Morzynski, the company’s vice president for marketing, told me. “When it’s smoky, things are hectic, what have you, people tend to take the road they know.”

The five places with the most limited evacuation routes were:

Three major blazes have whipped through Bell Canyon, a hilly gated community home to about 2,000 residents, since Tim Brehm moved there in 1980.

Brehm, a retired high school teacher, prepares his home each year by clearing brush and maintaining hundreds of feet of defensible space around his home.

He knows there are two exit routes out of Bell Canyon but has never used either. He has always stayed behind to defend his property, though he acknowledged that fires appear to be growing more belligerent.

“I always have a viable escape plan: Keep my keys in my pocket and my truck is right there,” Brehm told me. “If everything goes south, then I’ll just get in my truck and go.”

How to prepare for wildfires:

Track wildfires near you.

Britney Spears: The artist’s case returns to a Los Angeles courtroom this afternoon.

Prison vaccine mandate: A federal judge has ordered that all employees entering California prisons be vaccinated, The Associated Press reports.

Toxic air: A new analysis has found a major increase in the amount of wildfire smoke West Coast residents are breathing, KCRW reports.

Top public utility regulator resigns: Marybel Batjer — a regulator with the California Public Utilities Commission, which oversees Pacific Gas & Electric — is stepping down, according to KTLA.

Golden Gate Stimulus II: The third California stimulus payment is set to go out on Oct. 5. There are a few reasons for the gap between payments, according to SFGate.

Aliso Canyon settlement: Southern California Gas Company has agreed to pay up to $1.8 billion in a settlement for a 2015 gas leak that spewed noxious fumes into homes in Porter Ranch.

Homeless people sue for their rights: In San Luis Obispo, a group of homeless people is seeking the right to camp in open spaces and to sleep in cars, CalCoastNews reports.

Theranos trial: Elizabeth Holmes persuaded billionaires to invest in Theranos despite warnings its tests were dangerously unreliable, according to evidence presented Tuesday during her trial.

San Juan Bautista ranch: In an effort to protect the scenic area surrounding San Juan Bautista in San Benito County, a land trust bought a 540-acre ranch for $4.4 million, according to The Mercury News.

San Jose apology: More than a century after arsonists destroyed San Jose’s Chinatown, the City Council approved a resolution to apologize to Chinese immigrants and their descendants for its role in perpetuating systemic racism, The Associated Press reports.

The California Michelin ratings are officially in.

Twenty-seven restaurants earned stars for the first time in 2021, bringing the total number of starred restaurants in the Golden State to 90. Browse them all.

A little western ghost town known for its cottonwood trees, Los Alamos has blossomed into a destination for wine lovers and foodies. More quaint than Solvang and Los Olivos, it offers a trip back in time and all the charm of a well-loved rancher’s watering hole. It borders the Santa Ynez Valley and is an excellent stop on the way to the beautiful Central Coast of California.

Starting today, fourth graders in California can apply for a pass that allows them and their families to explore 19 state parks for free for a year.

The California State Park Adventure Pass was championed by Jennifer Siebel Newsom, the governor’s wife, who said in a statement that it “will help promote a healthier, more equitable California for all.”

Apply for the program here.

Steven Moity and Mariel Wamsley contributed to California Today. You can reach the team at [email protected].