It was late March, and Mario Smith was staring at an uncertain future.

Mx. Smith, a 20-year-old immigrant from Jamaica who identifies as transgender and nonbinary, was nearing the end of an internship and preparing to plunge into a job market that, even before the pandemic, offered limited opportunities for people like them.

Even in New York City, where young people like Mx. Smith have flocked for decades in search of the freedom to live openly, long-established prejudices about gender identity and sexuality can still be a barrier to professional success.

Finding an inclusive workplace would be important in ways that were both obvious and intimate. Would employers recognize and respect Mx. Smith’s identity, and make sure co-workers did the same? And would bosses be supportive as Mx. Smith, who was taking hormones, went through something akin to a second puberty?

“It can be so hard to navigate that while also being in the workplace,” Mx. Smith said.

This summer, New York City will start an employment development program meant to address the needs of people like Mx. Smith, who identify as lesbian, gay, bisexual, transgender, queer or intersex and are homeless or at risk of homelessness.

The program will arrive in the middle of a turbulent moment for L.G.B.T.Q. children in the United States — especially transgender ones. After a Supreme Court decision guaranteed L.G.B.T.Q. people protection from workplace discrimination, state lawmakers around the country have sought to restrict transgender children’s rights and medical care.

Most such rights have already been acknowledged in New York City, and state lawmakers have taken steps in recent years to address gaps, like barring discrimination based on “gender identity or expression” and repealing the so-called “walking while trans” law.

But many in the L.G.B.T.Q. community say that workplaces have yet to become truly inclusive, and studies show large gaps in hiring and wages. The disparity is particularly pronounced for homeless and runaway youth, like Mx. Smith, who enter the job market with disadvantages that can leave them in dire economic positions.

City officials say the program, Unity Works, goes beyond job training and knits together a number of services in order to meet the needs of a vulnerable population poorly served by federally funded programs.

“The level of support and the resources that young people are getting in this program doesn’t exist in any other program for young people in this country that I’ve seen,” said Ashe McGovern, the executive director of the Unity Project, the city’s initiative focused on L.G.B.T.Q. young adults.

When the program begins July 1, it will connect 90 people between 16 and 24 years old with jobs or paid internships at businesses committed to fostering inclusive work environments. It will provide two years of job training and placement, assistance accessing social services, educational support and mental-health resources, with an additional year of follow-up support from case management workers and mental-health professionals.

Mx. McGovern, who identifies as queer and transgender, said the long runway was meant to ensure that the people involved, many of whom have long faced rejection from family or community institutions, do not feel abandoned or “left behind” when the program ends.

New York City has one of the largest populations of L.G.B.T.Q. residents in the country, and it has long been a haven for queer people escaping hostility in their communities.

“This is the city where everybody sees themselves making it,” said Mx. Smith, who came to New York in 2019. “I had that idea, too.”

When they came to the city, Mx. Smith had been in the United States less than a year. They had arrived, undocumented, from Jamaica at the end of 2018, going first to Florida and then to Massachusetts. As Mx. Smith came to realize they were transgender, they knew their mother would not be supportive.

“She didn’t get it,” Mx. Smith said. “She was still in the customs of home. So I had to leave, because she wasn’t going to understand who I was or where I’m going.”

Mx. Smith arrived in New York with no job and nowhere to say. The Ali Forney Center, a nonprofit that supports homeless L.G.B.T.Q. youth and is partnering with the city’s Unity Works program, provided Mx. Smith with housing and helped them get their green card.

The city’s first lady, Chirlane McCray, started the Unity Project in 2017 to better connect city agencies to young L.G.B.T.Q. people like Mx. Smith, who arrived in the city lacking support from their families.

“When you’re just starting out, and you’re faced with not having support from important adults in your life, and you’re new to the city, you have to navigate figuring out how you’re going to move forward,” Ms. McCray said in an interview.

Homeless L.G.B.T.Q. youth make up about 40 percent of the city’s homeless youth population, according to data. Experts and city officials have attributed the high rate in large part to rejection from family members.

“We’re dealing with young people who are being fundamentally rejected because of who they are,” said Alexander Roque, the executive director of the Ali Forney Center.

For homeless youth, that trauma is often compounded by the instability of sleeping on the street, Mr. Roque said, where young people face safety risks including sexual violence. They also typically lack access to supportive and inclusive community services, including housing, education and mental-health resources.

As those young people reach adulthood and age out of the youth shelter system, jobs can provide them with a path toward stability and economic security. 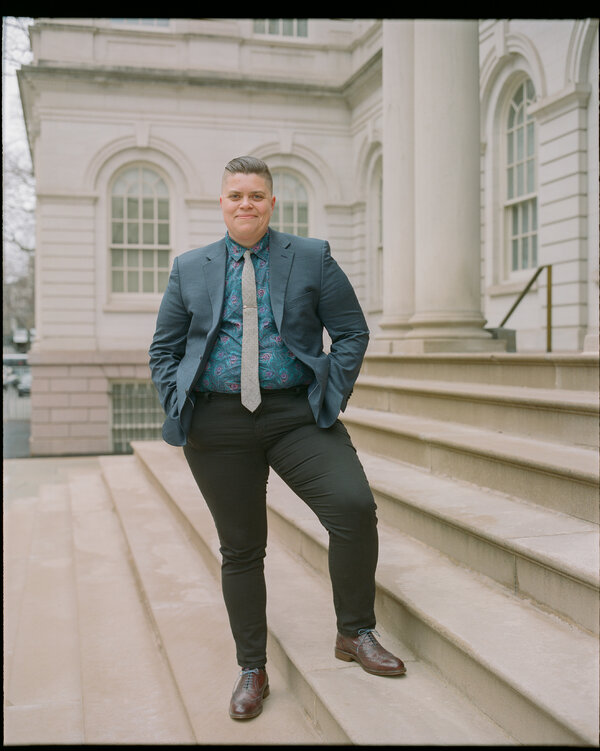 “Getting jobs is the most concrete response to their family rejection,” Mr. Roque said. “Like, ‘I can still make it. I can still be successful, I am not what you think of me.’”

But people who identify as L.G.B.T.Q. are significantly more likely to be unemployed, according to data from the Williams Institute at the U.C.L.A. School of Law. They are also more likely to be paid less than heterosexual and cisgender people and to live in poverty, and they face significant workplace discrimination.

During the pandemic, the unemployment gap appears to have widened. Last June, the Human Rights Campaign found that L.G.B.T.Q. people were more likely to lose their jobs or have their hours or wages cut because of Covid-19. Mr. Roque said that 90 percent of the young people the Ali Forney Center worked with had lost their jobs.

Even as the pandemic intensified the need for Unity Works, it was also threatening the program’s viability. Last summer, with the city anticipating a massive budget shortfall because of the virus, it put the program on pause.

Elected officials, advocacy groups and nonprofit organizations called on the city to keep the program alive, and the city ultimately funded it for $2.6 million over the next five fiscal years.

Mx. McGovern, a lawyer who works in public policy, said they hoped the program would encourage participants to reach for goals that might otherwise seem distant.

“That core sense of wanting to feel seen and safe and belong and heard about your dreams and aspirations and your right to exist and be in the world — it’s something that I can deeply relate to,” they said.