The scene at the airport in Duluth, Minn., on Wednesday night was jubilant and carefree, despite the 40-degree temperatures, pelting rain and blustery wind blowing toward Lake Superior. A 3,000-person audience cheered for President Trump, who spoke for 45 minutes and tossed hats into the approving crowd.

Two days later, the Minnesotans who were there are replaying the event in their heads with one new and gut-wrenching piece of information: Mr. Trump is infected with the coronavirus.

The people who attended the rally in Duluth, many wearing the red-and-black plaid that is an unofficial uniform of the logging industry, made up the last crowd of that scale to see Mr. Trump before the coronavirus diagnosis that shocked the world early Friday morning. They are feeling the reverberations in Minnesota, where Mr. Trump had attended a private fund-raiser near the Twin Cities, followed by the large rally in Duluth, before heading back to Washington.

In the front row of the event in Duluth, Cal Warwas, 44, an employee at a Minnesota mine, watched Mr. Trump with a group of friends. Mr. Trump seemed happy to be there, he recalled, unbothered by the cold temperatures in his navy overcoat, even as Mr. Warwas — a hardy resident of the state’s northern Iron Range — felt his own teeth chattering.

“I was fortunate,” Mr. Warwas said, adding that he was especially lucky to have seen Mr. Trump before his campaign was sidelined by the coronavirus. “I look at it more fondly now.”

Mr. Warwas said he was not worried that he could have contracted the virus from the event or the president, who he believed would make a full recovery.

Before President Trump announced that he tested positive for Covid-19, he tossed baseball hats into the crowd during his campaign rally in Duluth, Minn. on Wednesday. 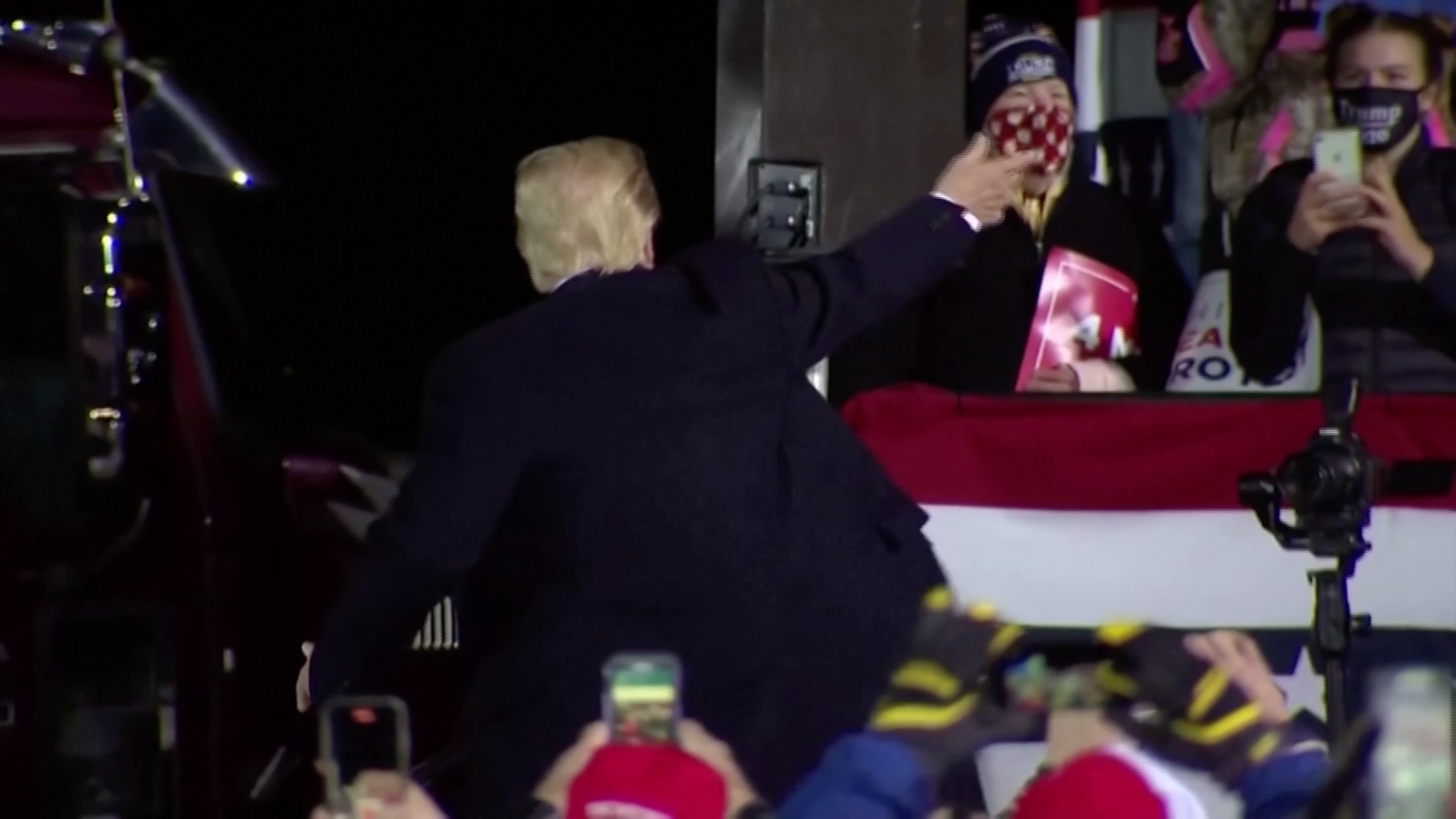 But elected officials who recently met with Mr. Trump are now taking precautions. Some said on Friday that they were being tested for the coronavirus, and a few Republican leaders from Minnesota have put themselves into quarantine in case they were exposed.

People at the rally said that though they felt relatively safe from the virus in Duluth, they were still thinking back on how tightly the crowd was spaced, who they might have spoken to, and whether the coronavirus precautions that organizers had arranged were sufficient.

“If I was close to people, I had my masks with me,” said Adam Morse, 45, a steelworker who was at the event. “I wasn’t really concerned. I think with every precaution that you’re going to take, this is eventually going to affect and hit everybody no matter how you try to prolong it.”

Big rallies are Mr. Trump’s campaign signature, and he had for months been pushing to bring them back, even as cases of the coronavirus remained persistently high across the country and as critics questioned the wisdom of bringing large groups of people together in places like Tulsa, Okla. In recent weeks, he staged a series of such rallies in outdoor airport hangars in battleground states like North Carolina, Pennsylvania, Arizona, New Hampshire and — on Wednesday night — Minnesota. 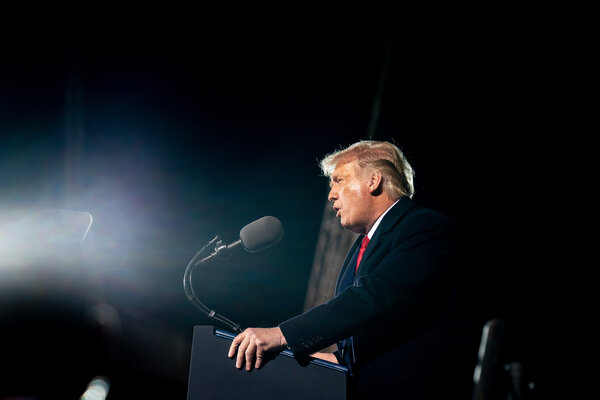 In Duluth, many said that they felt safe in the outdoor environment of the airport and that seeing the president was worth any small risk. Attendees were screened at the entrance and submitted to temperature checks. Hand sanitizer stations had been set up. Volunteers offered masks at entrances, and attempted to space people away from one another, said Laurio Brown, a realtor in Hibbing who drove down to Duluth with his son.

Mr. Trump’s speech was funny, sprinkled with one-liners, and full of promises to open up more mines and create jobs in northern Minnesota, he said.

“I think the president looked a little tired at the time, but it was after 8 at night when he landed,” Mr. Brown, 61, said. “I have no regrets, no qualms. I would do it again. The opportunity for me and my son to see our president 25 feet away from us was an amazing experience that I’ll never forget.”

Mike Schulz, 59, of Maple Lake, went to the Duluth rally with his girlfriend, her sister and her sister’s boyfriend. They took their places up front, less than 20 feet from Mr. Trump. “I was dead center, right in front of him,” he recalled.

Mr. Schulz dressed warmly in a red, white and blue windbreaker and a “Make America Great Again” hat. He did not bring a face covering.

“We’re not mask-wearers,” he said.

Jason Lewis, a Republican candidate for the Senate, attended the rally and shook hands with Mr. Trump, though a spokeswoman said he was feeling fine and displaying no symptoms. “Out of an abundance of caution he has already begun the self-quarantine process and will be getting Covid tested as soon as possible,” she said.

Other officials said they would take similar protective steps. Kurt Daudt, the Minnesota House minority leader, posted a photo of himself on Twitter with Mr. Trump, smiling and standing at an airport in Minnesota on Wednesday.

“I am not currently experiencing any symptoms, but out of an abundance of caution I am being tested again on Friday for Covid-19 after testing negative on Tuesday ahead of the president’s visit,” he said in a statement. “I will remain in self-quarantine until results are received.”

Reports of new cases have spiked recently in Minnesota, reaching an average of more than 1,000 per day for the first time. Rural areas of the state are faring the worst right now on a per capita basis, with especially worrisome trends in southern and southwestern counties. And the Duluth metro area has averaged more than 60 cases per day over the last week, the most of any point in the pandemic.

“Anyone who was in direct contact with President Trump or known Covid-19 cases needs to quarantine and should get tested,” said Kris Ehresmann, director of the Minnesota Department of Health’s Infectious Disease Epidemiology, Prevention, and Control Division.

“There is a potential risk that transmission occurred at the Duluth rally and other events associated with President Trump’s visit,” she said.

Community transmission of the coronavirus was high in the county before the rally, and people at the rally may have been infectious without knowing it, Ms. Ehresmann said, so the department is focusing on limiting the ripple effects and slowing secondary transmission that may result.

By Friday evening, the Trump campaign said that two rallies set for the weekend in Green Bay and Janesville, Wis., had been canceled, as Mr. Trump focused on recovering from the virus at Walter Reed National Military Medical Center.