From the East Coast to the West, health officials are taking the Covid-19 vaccines on the road.

Across the country, nurses, technicians, emergency medical workers and community partners are rolling up to the doorsteps, streets and churches of people who are homeless, who live in areas without reliable transportation or who have no internet access.

Their goal: to reach the unvaccinated stragglers in overlooked neighborhoods, plugging a vulnerable gap in the nationwide effort to outmaneuver death. Some people are encumbered by jobs or the responsibility of child care. Others struggle with dire poverty. Many are adrift, out of reach or uninformed. 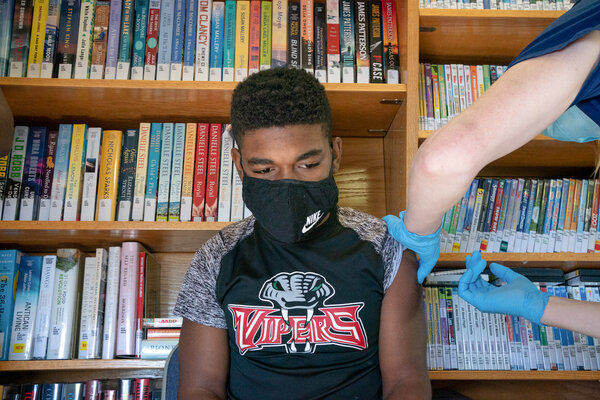 The mobile units are far from the privileged and fanciful scenes taking place in other parts of the United States and around the world. In Israel, a bar offered patrons “shots for shots.” People in Ohio who have received at least one dose of a Covid vaccine can enter a $1 million lottery. There is the novelty of getting vaccinated in a world-famous museum, on a beach or at a ski resort.

Then there are the people of Sussex County, Del. Many live in poverty, more vulnerable to the deadly path of the coronavirus. A trip to the doctor or a vaccination appointment can mean enduring the time-gobbling navigation of irregular bus routes, or losing a day’s wages.

The Rev. Sonja Ayers of Mount Zion A.M.E. Church in Ellendale is among the community leaders who has joined the campaign to turn obstacles into opportunities. She said organizers had posted fliers, published bulletins and relied on word-of-mouth to reach people who have little access to computers or cellphones in an area struggling with a high infection rate.

“We are trying to make it convenient for them so that they can get vaccinated,” she said. “The most important thing is that we save ourselves and others.”

In a pandemic, inconvenience can dictate the difference between life and death.

So in April, teams from Beebe Healthcare and local partners wrangled a bus that had been used as a mobile library and repurposed it with workstations.

A nurse fills syringes. A scribe registers patients. Pop-up tents offer shelter for observation after the injection. Only the books on the bus have been left undisturbed, arrayed on their perches as the silent overseers of the lifesaving work suddenly underway amid the shelves.

“We have some incredible pockets of poverty in Sussex County,” said Kim Blanch, a nurse taking part in the effort. “We have broadband deserts. And Covid has just really highlighted so many of the disparities that have been present.”

When it comes to vaccinations, she said, “literally meeting people where they are is so important.”

It is a team effort, all eyes on the road. There are county officials, librarians and medical workers who monitor patients after a shot.

The care, however, does not end when needles are withdrawn from arms.

The bus is one big opportunity on wheels. On the sidelines, medics offer instruction in CPR and how to stop bleeding — another resource that the community might not have had access to before but may someday mean the difference between life and death.

“We live for this,” said Glenn Marshall, special operations manager for the Sussex County Emergency Medical Services. “It has been proven that hands-on interaction is what truly saves lives.”

There are a few bumps in the road to broader vaccination. Language barriers, fear of the jab and distrust in the government and skepticism about the virus can be obstacles.

But the numbers are adding up. The first event, on April 13, was held at A.C.E. Peer Resource Center for homeless people. Then the bus rolled into town parks, community centers, low-income housing complexes and other public locations, Ms. Blanch, the nurse, said.

“We are just creating that ease of access,” she said. “We call it the Magic Bus.”

About 50 people can be vaccinated in several hours. Spanish and Haitian Creole translators are on hand. Children who were already familiar with the bus as a touring library brought parents, sometimes translating for them, said Rachel Lynch, a librarian.

The workers, many of them volunteers, dispel misinformation, listen and sometimes talk about other subjects. Trust solidifies when the bus comes back with second doses.

That return is important to Luis Torres. On June 3, he gets his follow-up. Mr. Torres, 64, said that his first dose, on May 13, was possible only because the bus was stationed that morning at Bethel A.M.E. Church in Milton, a five-minute walk from where he lives.

It is also important to Thomas Harmon, 73, who had long ago requested a vaccine at a pharmacy. The call never came.

So when the project coordinator from the church told Mr. Harmon about the bus, he rode his bicycle there from his senior living residence.

“There is too much sickness going on,” Mr. Harmon said. “And I see people pass away.”

In Washington State, Shots Outside the Shelter

The Bread of Life Mission first opened its doors to people in need of shelter and food in 1939, as the Great Depression was coming to an end in the United States.

This year, the mission, which is just south of downtown Seattle, has taken on a new hardship, and relief is now coming in the form of a vaccine.

Fewer than half of all Washington State residents have been fully vaccinated, according to data compiled by The New York Times.

On May 17, a clinic on wheels set out to find the rest.

It took the fight against Covid-19 to Pioneer Square, an area with several missions and a large population of homeless people. The team from Harborview Medical Center parked in front of the Bread of Life Mission and erected white tents — one for administering the vaccines, another with folding chairs so recipients could rest after their shots.

And the people came. There were men without a home, like Thomas Dunlap, 52, who, by chance, noticed the mobile clinic and accepted the inoculation with relief. As did another homeless man, Michael Clinger, 57, who said he was “sick of wearing a mask.”

The team was mostly administering second doses of the Moderna vaccine, but they did not turn away anyone who asked for a first.

“It kind of looks like you got to get it if you want to do anything,” said Enrico DePaul, 54, who is unemployed and originally from Philadelphia. “I waited as long as I could.”

Nikki Somers, 53, an office manager for the Alliance for Pioneer Square, was a witness to the risk. “I had two friends that got Covid,” she said. “I definitely know it was real.”

Like other mobile vaccine sites across the country, the program is aimed at filling in what life’s hardships often deny in terms of opportunity, funds and access.

“It was quite amazing,” said Christl Gay Marcontell, 51, a Pilates instructor whose studio is across the street. “It was hard to find an appointment. I had been searching for two weeks, and I came out, and they were here.”

About a dozen miles from St. Cloud, Minn., a city of about 70,000 people, lies a fruit and vegetable farm owned and run by John and Julie Svihel. About 100 workers coax eggplants, berries, melons, sweet corn and other produce from sandy loam fields that stretch across 800 acres in the state’s central region.

The farm is one of several areas in Minnesota where lack of access to technology and transportation has defined the potential for life, death or debilitating illness.

Last year, when the pandemic started to gather force, its workers, who come from Mexico, Honduras, the Dominican Republic, South Africa, Romania, Moldova, Ukraine and Slovenia, adjusted their lives as so many others did across the country, and stayed put.

But they live in close quarters on the farm, cooking together, working in shifts. The potential for mass infection lurked.

Mr. Svihel was sure that they could have found somewhere to get a vaccine nearby: Downtown Foley was about five miles away. But the shifts of dozens of workers would have to be juggled, transportation organized and language barriers surmounted.

So the Svihels pursued a state initiative that would bring vaccinations to the farm, scheduling them during a pause in planting after a streak of freezing nights. On the afternoon of May 12, in a paved lot, they made way for the traveling clinic.

“The bus pulled in and tractors pulled out,” Mr. Svihel said.

Over the next three hours or so, about 60 workers were vaccinated with the Johnson & Johnson vaccine, which meant the bus needed to make only a single trip. Some of the South African workers declined. Others were fearful, but went ahead, Mr. Svihel said.

Teams of up to eight people ride along. Since April 12, the buses have rolled out to homeless-services providers, farms, rural communities and multifamily housing units, said Emily Smoak, a department planner.

Ten to 180 people can be vaccinated in one event, depending on its size, she said.

Ms. Smoak said the mobile clinic teams aimed to build trust and curb the impact of the virus on communities, not just drive through them and tally up numbers.

“We are showing up in communities and telling people: ‘You do matter. We are not just going to leave you out of the greater process.”