Mourners from near and far passed through the doors of The Fountain of Praise church in Houston, Texas to view Floyd. 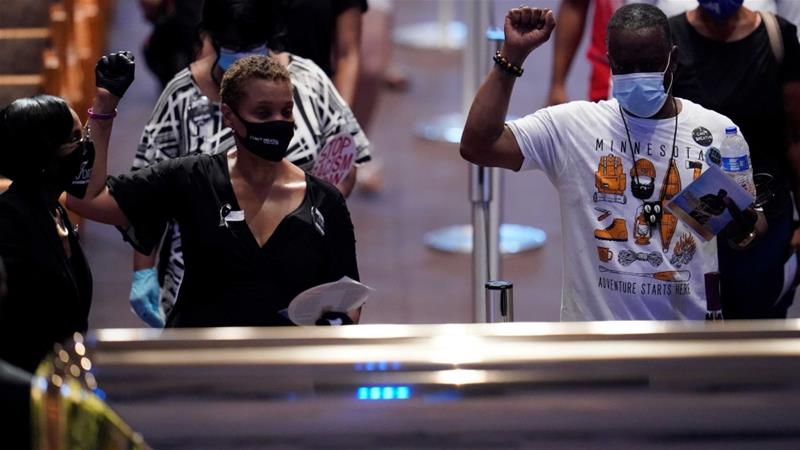 The last chance for the public to say goodbye to George Floyd drew thousands of mourners Monday to a church in his native Houston, as his death two weeks ago continues to stoke protests in the US and across the globe and sparked an international debate about racial injustice and police brutality.

They lined up for hours to file through the doors of The Fountain of Praise church, which Floyd attended for most of his life, and past the open gold-coloured coffin where he lay dressed in a brown suit.

Mourners, many wearing masks and T-shirts with the words “I Can’t Breathe,” stood six feet apart as they paused briefly to view the coffin. Some made the sign of the cross as they passed by. On the stage behind the coffin were two identical murals of Floyd wearing a black cap that read “Houston” and angel wings drawn behind him.

“With this happening to him, it’s going to make a difference in the world,” said Pam Robinson, who grew up with Floyd in Houston and handed out bottled water to mourners waiting outside in the searing Texas heat. One man in the line, which had no shade, collapsed as temperatures spiked above 90 degrees and was taken by stretcher to a cooling station set up in front of the church. 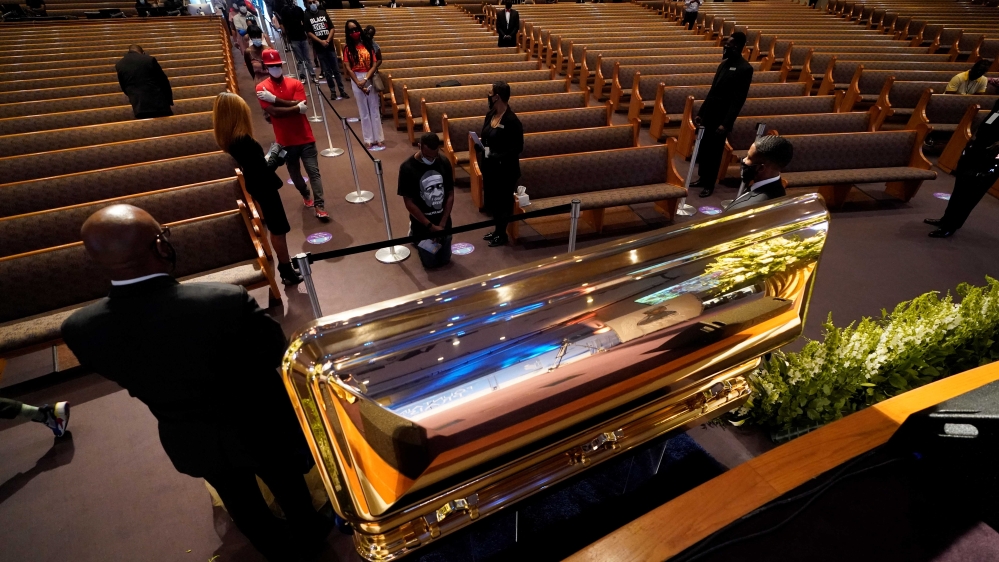 The mourners came from near and far. Comill Adams told The Associated Press news agency that she drove more than seven hours from Oklahoma City with her family, including two children ages eight and 10. They wore matching black T-shirts with “I Can’t Breathe” on the back – shirts she made up specifically or the memorial.

“We had been watching the protests on TV. We’ve been at home feeling outraged. At times, it brought us to tears,” Adams said. “The fact this one is causing change, we had to come be a part of.”

Floyd died May 25 after a white Minneapolis police officer pressed his knee into his neck for nearly nine minutes even after Floyd stopped responding. His death has inspired international protests and drawn new attention to the treatment of African Americans by police and the US criminal justice system.

Before Floyd’s coffin arrived, workers outside the church assembled a large floral arrangement with white roses on one side in the shape of a heart and with the initials “BLM,” for Black Lives Matter, created from blue roses and placed on top of the heart. The other side of the floral arrangement was made up of red roses and appeared to be in the shape of a raised fist.

Republican Texas Governor Greg Abbott was among the first to view the coffin and met the family later. He wore a striped gold and crimson tie, the colours of Floyd’s Houston high school.

“George Floyd is going to change the arc of the future of the United States. George Floyd has not died in vain. His life will be a living legacy about the way that America and Texas responds to this tragedy,” Abbott said.

Floyd’s funeral will be on Tuesday, followed by burial at the Houston Memorial Gardens cemetery in suburban Pearland, where he will be laid to rest next to his mother, Larcenia Floyd.

UPDATE: Tomorrow’s #GeorgeFloyd Houston memorial service will be limited to family and close friends. The public can pay their respects at a public viewing TODAY from 12-6pm CT at Fountain of Praise, 13950 Hillcroft Ave, Houston, TX 77085 pic.twitter.com/AeKeixD3E5

Former Vice President Joe Biden met with Floyd’s family in Houston on Monday and will provide a video message for the funeral service on Tuesday. Previous memorials have taken place in Minneapolis and Raeford, North Carolina, near where Floyd was born.

Floyd was raised in Houston’s Third Ward and was a well-known former high school football player who rapped with local legend DJ Screw. He moved to Minneapolis several years ago to seek work and a fresh start. His face now appears on a mural in his old neighbourhood, and his name was chanted by tens of thousands last week at a protest and march in downtown Houston.

We will use your email address only for sending you newsletters. Please see our Privacy Notice for details of your data protection rights. Overall around…