Video footage shows between 40 and 60 passengers punching and shoving each other as security struggle to maintain control.

The ship was on the final night of an eight-day Caribbean cruise – having stopped in Dominica, Turks and Caicos, and the Bahamas before returning to New York.

What started as a disagreement between two passengers on the dancefloor of the ship’s nightclub quickly spiralled out of control as more people became involved.

Eyewitness Theresa James, says the mass brawl aboard the Carnival Magic kicked off at around 2am on Tuesday and lasted a whole hour.

In her words, she told Fox News that the guests involved in the punch-up were ‘ignorant fools acting stupid’.

All hell broke loose when the threesome’s significant others found out about their escapade, the travel agent revealed. 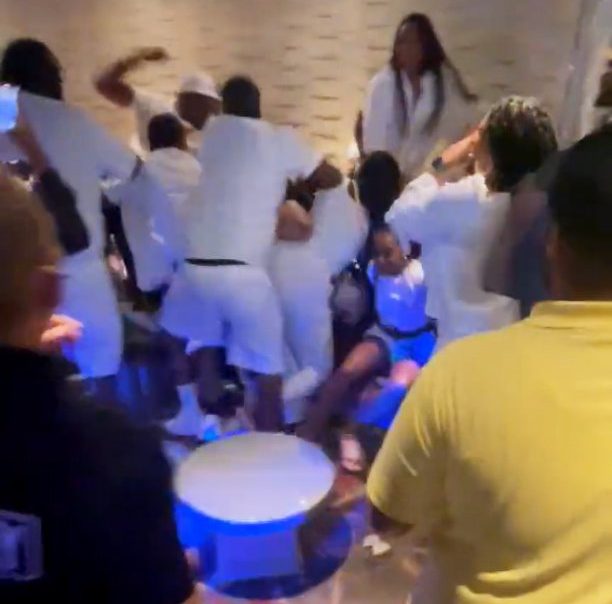 No serious injuries were reported, but bottles were smashed amid the chaos and one woman suffered a cut.

The fight eventually ended up spreading out to different parts of the ship, stretching from the fifth floor down to the first floor.

With no sign of the chaos subsiding, the Coast Guard were called to escort the ship to a dock where the NYPD were waiting.

No arrests were reported in the immediate aftermath, but an investigation was launched.

The brawl erupted as the ship approached New York, but it’s unclear whether the vessel was in New York, New Jersey, or international waters at the time. Police said passengers disembarked gradually without incident.

Another witnesses tweeted that he was ‘at the bar listening to my own music sipping a Shirley Temple, then the brawl broke out of nowhere!’.

He added that some of the passengers were ‘injured and cut up from glass’ and that ‘most if not all’ of the ship’s security guards rushed to the club to restore order.

The witness added: ‘It was the last night so i guess they wanted to go out with a bang, but a lifetime ban from cruising is wild lol.’

The NYPD initially described the incident as an ’emergency docking’, but in a statement, Carnival told PIX11 that it was a scheduled port call.

‘Last night while Carnival Magic was returning to New York, a number of guests were involved in an altercation in a nightclub,’ the cruise line said.

‘Thankfully no serious injuries were reported and our onboard security team intervened.

‘The ship arrived as scheduled this morning and shoreside law enforcement authorities were notified and met the ship to interview suspects and witnesses and conduct an investigation.’