Gov. Andrew M. Cuomo lashed out at the Metropolitan Transportation Authority in a wide-ranging speech last week, criticizing the agency he effectively controls for its inefficiency and outdated technology.

Though the thrust of Mr. Cuomo’s speech pushed for congestion pricing, he took particular aim at the transit authority for its decision-making related to cleaning subway stations.

“My favorite M.T.A. decision — because you have to laugh, otherwise you cry — is the one they made to pick a product to clean the subway stations,” Mr. Cuomo said Thursday, accompanied by a photoshopped image of a man cleaning the floor of a subway station. “What product did they pick? Tide. Yes, the same Tide detergent you use at home to wash your clothes. If it’s got to be clean, it’s got to be Tide.”

Mr. Cuomo’s criticism, however, did not seem to register with some riders. The New York Times spoke to nearly two dozen riders on Sunday, none of whom were aware of Mr. Cuomo’s comments.

But most agreed about the state of the subways: They are filthy, and it does not matter how they are cleaned. Riders just want to see improvements.

“It’s pretty gross,” William Sit, 32, said. “It’s not uncommon to have puke on the floor or even on the train as a smell.” 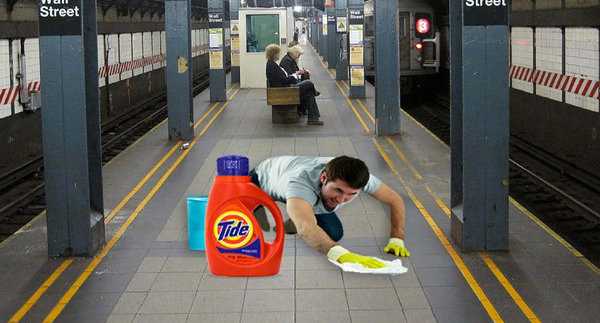 Standing on the platform for the Q train at the 72nd Street Station, Mr. Sit, a Brooklyn resident, said the cleanliness of stations varies drastically. The newer stations, like one at 72nd Street that opened two years ago, are cleaner.

“It’s not getting better,” said Cynthia Morgan, a 66-year-old from New Rochelle, N.Y., who was waiting for the shuttle at Times Square. “It’s a daily experience.”

While M.T.A. officials did not directly address Mr. Cuomo’s criticism, they did acknowledge that too many stations are “unacceptably dirty,” and said the M.T.A. is taking steps to address it.

“It was clear that the old methods simply weren’t working, and this new, different and urgent approach will provide our customers with the service and experience they deserve,” Maxwell Young, a spokesman for the M.T.A., said in a statement.

In January, the M.T.A., as part of the Subway Action Plan to improve the system, allocated funds for a one-time effort to clean and refurbish 100 stations and up to 3,000 cars. The M.T.A spent $9.5 million on outside contractors to perform the work.

“The fact that the M.T.A. is using Tide to clean the subways punctuates the point that a fundamental overhaul in approach and management is needed,” Patrick Muncie, a spokesman for Mr. Cuomo, said in a statement.

A spokesman for the M.T.A said Tide was used before the new cleaning initiatives.

Riders seemed concerned whether the subways could be kept clean as a result of the large number of homeless riders.

Several said they have noticed an increase in the number of people sleeping on the trains. The subway has long been a refuge for homeless people looking to stay warm during the winter months.

“The smell of the homeless — it’s very sad,” said Martha Carrillo, a 66-year-old resident of Jackson Heights, Queens, who expressed sympathy for their condition but said people who sleep on the subway often bring unpleasant odors.

Richie Johnstone, a 26-year-old Manhattan resident, said he has had to switch train cars because of the smell.

“I had one experience where I walked on the car with my girlfriend and there was a homeless man sleeping there, and the subway car smelled so bad that there was literally not a single person on the car,” Mr. Johnstone said. “Everyone walked on and walked back off and got on the next one.”

Kathryn Katz, a frequent visitor to New York City from New Haven, Conn., was one of the few riders who said she had seen improvements in subway cleanliness over the past few decades.

“I remember the subways back in the 50s and 60s with rats and everything,” Ms. Katz, 70, said. “It’s significantly cleaner.

She added: “Considering the amount of volume of people going through, it’s just amazing that it’s as clean as it is. You think there’d be trash all over the place.”