Tommy Tuberville, the Republican candidate for Senate in Alabama, is running in large measure on his experience in college football’s Southeastern Conference, known as the S.E.C., where he coached Auburn University.

But he has had experience with another S.E.C., the Securities and Exchange Commission, and other financial regulators.

A review by The New York Times found that Mr. Tuberville, who is leading Senator Doug Jones in the polls, has a history of involvement with at least three people who were later convicted of financial fraud in what were described as Ponzi schemes. Mr. Tuberville was largely seen as a victim and was never charged with a crime.

In two episodes, Mr. Tuberville lost millions of dollars. A third was more minor, when Mr. Tuberville and his wife, Suzanne, bought a home through a company created by a lawyer who was later convicted of running a real estate-related Ponzi scheme.

The Times review included a small charitable foundation created by Mr. Tuberville, finding that its tax records indicated that less than a third of its proceeds went to the veterans’ causes it was set up to advance. The foundation also had bookkeeping issues.

The review raised questions about Mr. Tuberville’s judgment and financial acumen. While he has said on the campaign trail that he hoped to serve on the “banking finance” committee — the Senate has separate, and prestigious, banking and finance committees — he has at times undercut his own qualifications. In regards to an ill-fated hedge fund venture, he once told a reporter, “I’m not smart enough to understand all the numbers.”

The Times previously reported on one fraudulent scheme in which Mr. Tuberville was an investor and a 50/50 owner of a financial firm, TS Capital, that was shut down by state and federal regulators. A 2012 complaint from the Commodity Futures Trading Commission said that Mr. Tuberville’s partner, John David Stroud, had trading losses of nearly $1.2 million and misappropriated nearly $2.3 million for “car payments, travel expenses, entertainment and retail purchases.” As one of Mr. Stroud’s lieutenants put it, according to court filings, the firm had “the optics of a Ponzi scheme.” 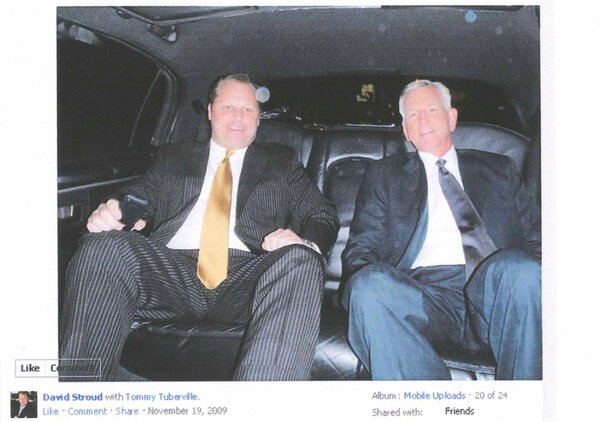 Mr. Tuberville has portrayed himself as an unwitting victim of the financial firm. But he made introductions to investors, was kept in the loop on hiring decisions and traveled to New York with Mr. Stroud to meet potential brokers.

Mr. Stroud was eventually sentenced to a decade in prison, and Mr. Tuberville lost more than $2 million, including his investment, legal fees and the cost of settling a lawsuit from investors.

Victor L. Hayslip, a former lawyer who represented Mr. Tuberville then, has said of him, “Being naïve is not a crime.”

But TS Capital — short for Tuberville and Stroud — was not the only questionable investment opportunity. Mr. Tuberville also invested in GLC Enterprises, which the S.E.C. called “an $80 million Ponzi scheme.” GLC was run by Jim Donnan, a former football coach at the University of Georgia, and a partner named Gregory Crabtree. The business ensnared several coaches and former players before it was closed in 2011.

Mr. Tuberville invested $1.9 million, and lost about $150,000, a person with knowledge of his investments said.

“Jim was the recruiter,” Mr. Tuberville said, referring to Mr. Donnan, in a comment to ESPN at the time the scheme was revealed. “I think Jim was a little like the rest of us. He thought it was going to be a good deal and it just went bad.”

Mr. Donnan was eventually acquitted but his partner, Mr. Crabtree, was sentenced to five years in prison and had to pay back more than $20 million.

Real estate records reviewed by The Times revealed a third transaction in which Mr. Tuberville had business dealings with an individual who later pleaded guilty to fraud.

In 2004, Mr. Tuberville and his wife bought their home in Santa Rosa Beach, Fla., through a limited liability company setup by a Georgia lawyer named Robert P. Copeland. From at least 2004 to 2009, Mr. Copeland was accused of running what the S.E.C. called “a classic Ponzi scheme” that raised $35 million for real estate transactions, though the money was often pocketed instead. He pleaded guilty in 2009 and was sentenced to more than a decade in prison on a wire fraud charge.

Associates of Mr. Tuberville said that he and his wife were referred to Mr. Copeland through an intermediary and the purchase of the Florida home was unrelated to the Ponzi scheme.

“The Tubervilles never met, interacted with, communicated with and certainly never invested with Robert Copeland,” Mr. Shashy, the campaign manager, said but did not elaborate.

Instead of the Tubervilles simply buying the house in their own name, public records, including court filings, show that the limited liability company was setup by Mr. Copeland for the couple as part of a real estate deal called a “reverse 1031 exchange,” in which investors try to defer their tax bills by exchanging similar properties.

The 1031 deal, which gets its name from a section of the federal tax code, ultimately fizzled, though the Tubervilles kept the house. But the limited liability company created by Mr. Copeland did not relinquish the title, an issue that dragged on unresolved for years. In 2012, the Tubervilles, who by then had been living at the house on and off for years, had to go to court to claim the title.

Tim Cronic, a real estate lawyer who was involved in the initial transaction, confirmed that the Tubervilles “would’ve never talked to Copeland” and Mr. Copeland would have only been hired through an intermediary.

Another notable venture of Mr. Tuberville’s is a charity he founded in 2014 to aid veterans. A review of five years of the foundation’s tax records showed that less than a third of the money raised went to its charitable mission. (The Better Business Bureau recommends at least 65 percent.)

“For a very small charity, you have these huge expenses,” said David Nelson, a retired partner at Ernst & Young who has specialized in tax-exempt groups, and who reviewed the foundation’s public filings at The Times’s request. “The other thing that jumped out is that out of the amounts of money they collected, a relatively small amount was being directed to charitable activities,” Mr. Nelson said.

The campaign, along with people connected to the foundation, said there was a far greater level of spending on the foundation’s charitable mission than the I.R.S. records indicate, and produced internal records for 2018 that showed nearly $20,000 was raised for a temporary project to provide a retreat for veterans. But the records raised bookkeeping questions, since they showed more than $61,000 of 2018 revenue, roughly twice what the charity reported to the I.R.S. that year.

Mr. Nelson said the public records showed other signs of sloppiness, including one year when the foundation filed the wrong tax form.

Mr. Shashy said Mr. Tuberville was inspired to start the charity because his father was a veteran who took part in the Normandy landing.

Mr. Tuberville’s opponents have already pounced on his history with Mr. Stroud. Mr. Tuberville’s “firm cheated people out of millions,” his primary opponent, the former U.S. Attorney General Jeff Sessions, said in one advertisement before he was defeated.

Mr. Jones, in a more recent ad, says, “An Alabama teacher and parents saving for their children’s education lost everything,” adding, “Tuberville’s partner got 10 years in prison. And Tuberville? You guessed it. He said he didn’t have a clue.”

Mr. Tuberville, however, seems like a good bet to win. Polls generally give him a double-digit lead over Mr. Jones, who is considered the most vulnerable Democrat in the Senate. Mr. Tuberville’s strategy has been to hew closely to President Trump, and rely on his own name recognition. While modern football coaches in the state of Alabama are overshadowed by Nick Saban, the coach of the University of Alabama, Mr. Tuberville had his moments, most notably a 2004 team that went undefeated.

Asked whether Mr. Tuberville still wanted to be on the finance or banking committees, Mr. Shashy said, “While the Swamp focuses upon issues like Senate committee assignments, Coach is focused solely upon serving his fellow Alabamians and faithfully representing their conservative values, beliefs, and desires.”

President Trump is planning to hold a rally in Florida on Monday, just over a week from his coronavirus diagnosis. Joe Biden will travel to Ohio. Read the latest updates.