Pelosi says she isn’t rushing into the House vote on holding Attorney General Barr in contempt over the Mueller report. 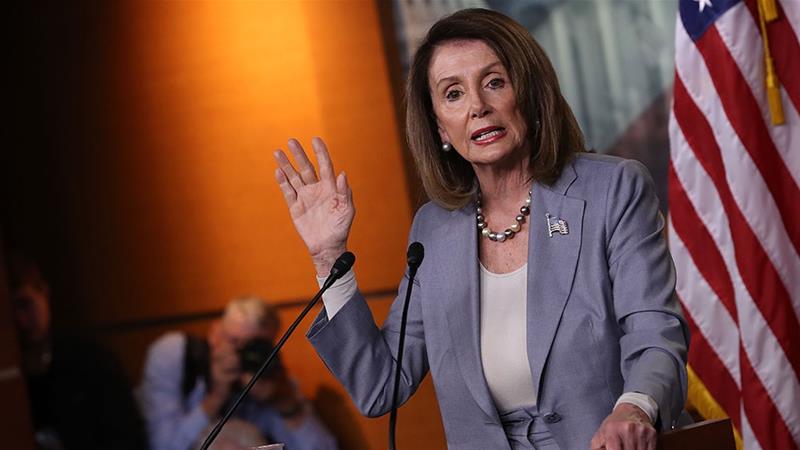 US House Speaker Nancy Pelosi said on Thursday that the House of Representatives is not rushing into a vote on holding Attorney General William Barr in contempt of Congress for not providing Special Counsel Robert Mueller’s full report on his Russia investigation.

The top Democrat told reporters that she will follow a methodical process to the “constitutional crisis” over President Donald Trump’s resistance to congressional investigation.

Pelosi spoke at her weekly news conference a day after the Democrat-led House Judiciary Committee approved a contempt citation against Barr for failing to comply with a subpoena for the full report and underlying evidence.

Judiciary Chairman Jerrold Nadler said the House will vote on the contempt citation “soon”, but said the date was still to be determined. On Wednesday, he declared the United States faced a “constitutional crisis”.

Speaking to reporters, Pelosi agreed, saying “the administration has decided that they’re not going to honour their oath of office”.

But Pelosi said she was waiting for other developments, including whether Mueller testifies to Nadler’s committee.

The step-by-step approach has been Pelosi’s touchstone for the escalating standoff between the two branches of government in the aftermath of Mueller’s report. By rebuffing Congress, she said, the White House was essentially committing the kind of obstruction of justice that Mueller had investigated in his report.

“The president is almost self-impeaching,” she said, though, she continued to tamp down talk of impeachment.

Just hours before Wednesday’s House panel vote on contempt, Trump invoked the principle of executive privilege for the first time, a claim Democrats have called “nonsense”.

The chairman of another House committee, the intelligence panel’s Adam Schiff, issued his own subpoena to the Justice Department for the full Mueller report late on Wednesday.

The Justice Department has said it was disappointing that members of Congress “have chosen to engage in such inappropriate political theatrics”.

The president’s decision to invoke executive privilege was weeks in the making, the next inevitable escalation between the White House and Congress over a number of probes. The White House has rejected all efforts to probe Trump’s business dealings or tax returns as well as the West Wing’s security clearance procedure.

If the contempt resolution is approved by the full House, where the Democrats hold a solid majority, it would almost certainly move to an unusual, and potentially protracted, multipronged court battle with the Trump administration.

Enforcement of congressional subpoenas and contempt citations in the modern era is done through litigation, initially in the US District Court for the District of Columbia, or potentially on an accelerated basis the DC Circuit Court of Appeals. If Trump fights the effort, as he has said he would, the matter could end up in the US Supreme Court.

House leaders are weighing their options and assessing the timing of going to court, House Oversight Committee Chairman Elijah Cummings told Al Jazeera. The House would likely have to hire an outside litigation firm with a strong appellate practice that could handle the case. House leaders have not yet taken that step but they appear headed there.

“We are going to try to litigate this in an expedited fashion. We are not going to allow the president and administration to stonewall sufficiently to run out the clock so they can avoid accountability and avoid us getting to the full truth of this case,” Representative David Cicilline, a Democrat, told reporters on Wednesday.

Republicans point to the extended time it took to gain compliance through federal courts of their demand former Attorney General Eric Holder turn over documents related to his role in the “Fast and Furious” gun-walking scandal. It was two years, and two months after the House voted to hold Holder in contempt in 2012 before a federal judge ordered that he disclose the documents Republicans sought.

Legal experts said a confrontation between the Trump administration and the House over access to Mueller’s grand jury materials and the series of demands by House committees Trump has rebuffed would likely be handled more quickly.

“Courts are quite capable of moving with great speed as they did in the Nixon tapes case and the case of Truman’s steel seizure, and the matter could reach the US Supreme Court very quickly.” Lawrence Tribe, a Harvard constitutional law professor, told Al Jazeera in April as the legal battle between the House and Trump began to take shape.

The Nixon tapes case was a Watergate-era controversy in which then-President Richard Nixon sought to claim “executive privilege” over tapes of his Oval Office conversations. The Supreme Court ruled within three weeks of oral argument that the public interest in transparency outweighed Nixon’s confidentiality concerns.

“We have a number of tools available to us to try to compel compliance but as people see the president and members of his administration continuing his effort to obstruct the investigation, to impede the fact-finding process, to prevent us from getting to the truth, the sentiment that this is unacceptable continues to grow,” Cicilline said.

Growing calls for Mueller to testify

As the confrontation between Democrats and the Trump administration intensifies, there are growing calls for Mueller to testify before House and Senate panels.

The House Judiciary Committee is in talks for Mueller himself to appear May 15, but there is no agreement yet, and Trump has previously said Mueller should not testify. On Thursday, however, he said he will leave the decision to Barr.

Senator Dianne Feinstein and other Democratic members of the Senate Judiciary Committee issued a letter to committee chairman Senator Lindsey Graham, a Republican, on Wednesday asking that Mueller be brought before the committee to testify.

“The Mueller report is a seminal document that caps the special counsel’s nearly two-year investigation into Russian interference in the 2016 election,” the senators wrote. “However, as comprehensive as the report is, it’s clear there are many outstanding questions that remain unanswered.”

The letter included a list of 60 questions Democrats want to ask Mueller.

Areas of inquiry the Democrats wish to pursue include: offers of assistance by Russia to the Trump campaign, campaign chairman Paul Manafort’s sharing of polling data with a Russian operative, Trump campaign efforts to benefit from Russian hacking and WikiLeaks’ release of stolen documents, efforts to establish “back channel” communications with Russia, and Trump’s personal and business ties including the Trump Tower Moscow project.

“We believe Robert Mueller would be best-suited to answer these and other questions,” the letter said.

Barr last month released a 448-page redacted version of Mueller’s report on his 22-month investigation into Russian election meddling in the 2016 presidential election.

The redacted Mueller report details extensive contacts between Trump’s 2016 campaign and Moscow as well as the campaign’s expectation of benefiting from Russia’s actions.

It did not establish that the Trump campaign conspired with Russian operatives. The investigation did, however, examine “multiple acts by the president that were capable of exerting undue influence over law enforcement investigations”.

Mueller did not conclude that Trump committed obstruction of justice, but did not exonerate him either. Barr and Deputy Attorney General Rod Rosenstein subsequently concluded that Trump did not break the law.

The Justice Department has made a less redacted version available for House and Senate leaders and some committee heads, but the Democrats have said that is not enough and have so far declined to read it.

With additional reporting by William Roberts in Washington, DC. 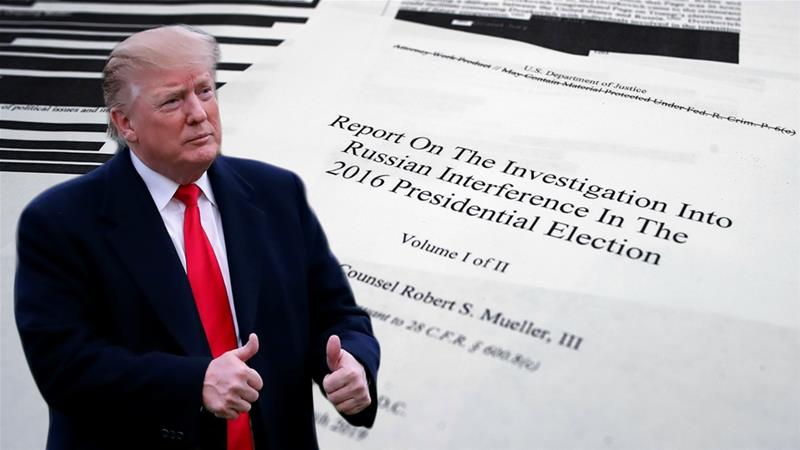 The Mueller report: Can Trump be impeached?