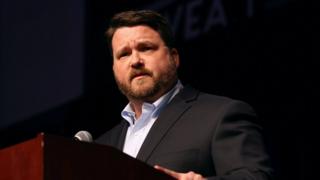 The chairman of the Democratic Party in Iowa has resigned after last week’s caucus was beset with technical issues, questions over accuracy and delays.

In his resignation letter, Troy Price said that “the precinct and satellite caucus meetings themselves went well”.

But he conceded that the process of reporting results was “unacceptable”.

Pete Buttigieg won with a narrow 0.1% victory over Bernie Sanders in terms of delegates, while Senator Sanders won the popular vote.

Since then, the Sanders campaign has asked for a “recanvassing” check of the vote.

Mr Price said in his letter: “While it is my desire to stay in this role and see this process through to completion, I do believe it is time for the Iowa Democratic Party to begin looking forward.

“My presence in my current role makes that more difficult.”

He then added that the Iowa Democrats were “not the only party to blame”, and mentioned the partners and vendors who were also involved.

Why does Iowa matter?

In US elections, the Iowa caucus is the important first step in choosing the challenger to the incumbent president.

Primaries and caucuses are a string of nationwide state-by-state votes, which culminate in the Democratic nominee being chosen at the party convention in July.

Although Iowa awards only 41 of the 1,991 delegates required to become the Democratic White House nominee, it is usually considered the first clear indication of each candidate’s standing within the race.

What happened at the caucus?

This year the Iowa Democratic Party distributed a new app, called Shadow, to precinct officials that was supposed to help them report results more quickly.

It was an issue with this app, which the party said was a coding error, that led to the delay in results and ultimate chaos on 3 February.

Mr Buttigieg declared victory for himself that same day, before any of the results were released.

In the end, the results were finally released three days later than expected.

By that time the chairman of the US Democratic National Committee (DNC) had already weighed in, calling for a review of the vote totals.

The second vote that took place – the primary in New Hampshire on 11 February – was more clear-cut. Senator Sanders came in first, with Mr Buttigieg second and Minnesota Senator Amy Klobuchar in third place.

Who will take on Trump in November?

We will use your email address only for sending you newsletters. Please see our Privacy Notice for details of your data protection rights. Diana won…

A jealous thug has been sentenced to life in jail after admitting the cold-blooded murder of his love rival in a vicious claw hammer attack,…