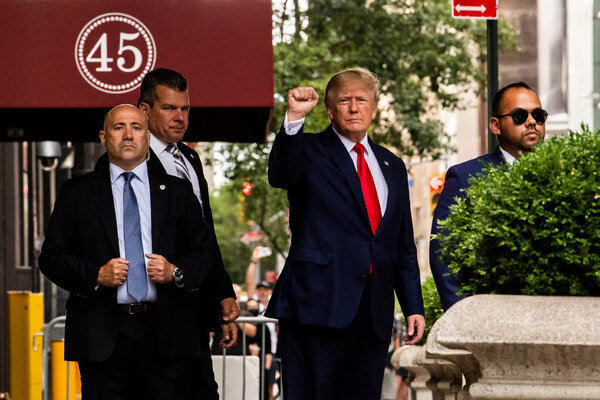 Donald J. Trump has long derided public figures who invoke their constitutional right against self incrimination, but on Wednesday he took full advantage of the Fifth Amendment.

For hours under oath, Mr. Trump sat across from the New York State attorney general, Letitia James, responding to every question posed by her investigators by repeating the phrase “same answer” over and over again.

Mr. Trump’s refusal to respond substantively to any questions in the court-ordered deposition was an unexpected twist that could determine the course of Ms. James’s three-year civil investigation into whether the former president fraudulently inflated the value of his assets to secure loans and other benefits.

It was also an extraordinary moment in an extraordinary week, even by the former president’s standards. Two days after his home was searched by the F.B.I. in an unrelated investigation, Mr. Trump invoked his Fifth Amendment right while openly questioning the legitimacy of the legal process — as he has with the nation’s electoral system — and insulting a law enforcement official sitting just a few feet away.

Mr. Trump’s only detailed comment, people with knowledge of the proceeding said, was an all-out attack on the attorney general and her inquiry, which he called a continuation of “the greatest witch hunt in the history of our country.”

“I once asked, ‘If you’re innocent, why are you taking the Fifth Amendment?’” he said while reading from a prepared statement, which overlapped significantly with one he released to the public. “I now know the answer to that question.” He said that he was being targeted by lawyers, prosecutors and the news media, and that left him with “absolutely no choice” but to do so.

Ms. James is now left with a crucial decision: whether to sue Mr. Trump, or seek a settlement that could extract a significant financial penalty. And while declining to answer questions might have offered the safest route for the former president, it could strengthen Ms. James’s hand in the weeks to come.

In a statement on Wednesday, a spokeswoman for Ms. James said, “Attorney General James will pursue the facts and the law wherever they may lead. Our investigation continues.”

The encounter, the first time the former president had faced off directly with Ms. James, who has become his chief antagonist in New York, came at a particularly perilous moment for Mr. Trump. On Monday, the F.B.I. searched his Florida home and private club in Palm Beach, Fla., as part of an investigation into sensitive material that he took when he left the White House.

The search was an embarrassing reminder of the multiple inquiries swirling around the former president in connection with his conduct in the final weeks of his presidency. In addition to the investigation that triggered the F.B.I.’s search, federal prosecutors are questioning witnesses about his involvement in efforts to reverse his election loss; a House select committee held a series of hearings tying him more closely to the Jan. 6 attack on the Capitol; and a district attorney in Georgia is investigating potential election interference on the part of Mr. Trump and his allies.

Numerous inquiries. Since Donald J. Trump left office, the former president has been facing several different civil and criminal investigations across the country into his business dealings and political activities. Here is a look at some notable cases:

Classified documents inquiry. The F.B.I. search of Mr. Trump’s Florida home appears to be related to a Justice Department investigation into his handling of classified materials. The inquiry is focused on the discovery by the National Archives that Mr. Trump had taken 15 boxes of documents from the White House to Mar-a-Lago when he left office.

Jan. 6 investigations. In a series of public hearings, the House select committee investigating the Jan. 6 attack laid out a powerful account of Mr. Trump’s efforts to overturn the 2020 election. This evidence could allow federal prosecutors, who are conducting a parallel criminal investigation, to indict Mr. Trump.

Georgia election interference case. Mr. Trump himself is under scrutiny in Georgia, where the district attorney of Fulton County has been investigating whether he and others criminally interfered with the 2020 election in the state. This case could pose the most immediate legal peril for the former president and his associates.

Manhattan criminal case. The Manhattan district attorney’s office has been investigating whether Mr. Trump or his family business, the Trump Organization, intentionally submitted false property values to potential lenders. But the inquiry faded from view after signs emerged that Mr. Trump will not be indicted.

New York State civil inquiry. The New York attorney general’s office is conducting its own civil inquiry into some of the same conduct as the Manhattan district attorney’s investigation. The case is focused on whether Mr. Trump’s statements about the value of his assets were part of a pattern of fraud or were simply Trumpian showmanship.

Ms. James is conducting a civil inquiry, and she cannot file criminal charges against the former president. But the Manhattan district attorney’s office has been conducting a parallel criminal investigation into whether Mr. Trump fraudulently inflated valuations of his properties.

That criminal investigation factored into Mr. Trump’s decision not to respond to questions, a person with knowledge of his thinking said.

Any misstep could have breathed new life into that inquiry, which lost momentum earlier this year, and the district attorney, Alvin L. Bragg, had said he would monitor the interview closely.

There were other compelling reasons for Mr. Trump to hold his tongue. If the attorney general had found that any of Mr. Trump’s responses contradicted evidence from its inquiry, the inconsistency could have prompted a separate perjury investigation.

But his decision could have a significant impact on any trial if Ms. James’s investigation leads to a lawsuit. Jurors in civil matters can in many cases draw a negative inference when a defendant invokes his or her Fifth Amendment privilege, unlike in criminal cases, where exercising the right against self-incrimination cannot be held against the defendant.

And if Ms. James prevails at a civil trial, a judge could impose steep financial penalties on Mr. Trump and restrict his business operations in New York.

With that threat in hand, Ms. James’s lawyers could use Mr. Trump’s refusal to answer questions as leverage in settlement talks.