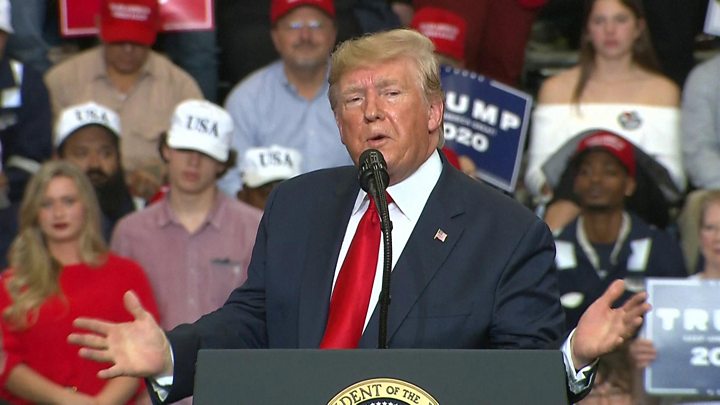 Donald Trump lashed out at Democrats during a rally in Louisiana on Wednesday, as impeachment testimony from a senior US diplomat was released.

Bill Taylor, the top US diplomat in Ukraine, testified that Trump officials threatened to withhold aid from Ukraine unless it agreed to investigate his Democrat presidential rival Joe Biden.

Public impeachment hearings will begin next Wednesday, with Mr Taylor set to be the first witness called.

Speaking at his rally on Wednesday, Mr Trump accused the Democrats of trying to overthrow American democracy via a “deranged, delusional, destructive and hyper-partisan” process.

But he faces an increasing chorus of witnesses who say his administration contrived to withhold US military aid to Ukraine in exchange for an investigation into a domestic political rival – a move critics say was a clear violation of presidential ethics.

The impeachment inquiry centres on claims that Mr Trump pressured Ukraine to announce an investigation into former Vice-President Joe Biden, a leading contender for the Democratic Party’s presidential nomination. Mr Trump denies any abuse of power, calling the inquiry a “witch hunt”.

At the rally in the city of Monroe, the president accused the Democrats of “ripping the guts out of our country”, suggesting they were engaged in an “illegal act”.

The president also attempted to discredit the whistleblower who flagged up his July 25 phone call with Ukrainian President Volodymyr Zelensky.

But a rough transcript of the call released by the White House shows that Mr Trump asked Mr Zelensky to investigate Mr Biden, now a Democratic frontrunner for next year’s White House election.

Mr Trump said the whistleblower made a “horrible statement” about the call, which led to the impeachment probe.

He sought to galvanise support for Republican businessman Eddie Rispone, who is bidding to unseat Democratic Governor John Bel Edwards in next month’s state election.

The president told supporters Mr Rispone will “defend your values”, while accusing Mr Edwards of being “dangerously soft on crime”.

What’s happening with the impeachment?

Democrats said on Wednesday that the first public hearings of the inquiry will take place next week. Three state department officials will testify first. So far, lawmakers from three key House of Representatives committees have heard from witnesses behind closed doors.

House Intelligence Committee chairman Adam Schiff, who is overseeing the inquiry, told reporters on Wednesday that an impeachment case was building against the president.

He said: “We are getting an increasing appreciation for just what took place during the course of the last year – and the degree to which the president enlisted whole departments of government in the illicit aim to get Ukraine to dig up dirt on a political opponent.”

The Capitol Hill hearings will now be broadcast live, with both Democratic and Republican lawmakers questioning witnesses.

One of the first to appear will be Bill Taylor, acting US ambassador to Ukraine, who delivered some of the most explosive private testimony last month.

On Wednesday – a week ahead of his scheduled public hearing – House Democrats released a transcript of his evidence. It showed Mr Taylor told lawmakers it was his “clear understanding” that the president had withheld nearly $400m (£310m) in US military aid because he wanted Ukraine to investigate the Bidens.

The military aid to Ukraine was released in September, after a whistleblower raised the alarm about a 25 July phone call in which Mr Trump asked the Ukrainian president to investigate the Bidens.

Impeachment is the first part – the charges – of a two-stage political process by which Congress can remove a president from office. If, following the hearings, the House of Representatives votes to pass articles of impeachment, the Senate is forced to hold a trial.

A Senate vote requires a two-thirds majority to convict and remove the president – unlikely in this case, given that Mr Trump’s party controls the chamber.

Only two US presidents in history – Bill Clinton and Andrew Johnson – have been impeached, but neither was convicted. President Richard Nixon resigned before he could be impeached.