When Senator Elizabeth Warren formally announced her 2020 presidential bid this weekend, President Trump responded with a familiar line of attack.

He mocked Ms. Warren, Democrat of Massachusetts, for her claims to Native American ancestry, again calling her by the slur “Pocahontas.” Mr. Trump then appeared to refer to the Trail of Tears, the infamously cruel forced relocation of Native Americans in the 19th century that caused thousands of deaths.

“Will she run as our first Native American presidential candidate, or has she decided that after 32 years, this is not playing so well anymore?” Mr. Trump tweeted. “See you on the campaign TRAIL, Liz!”

(Ms. Warren had recently apologized to the Cherokee Nation for taking a DNA test to prove her ancestry.)

The comments drew immediate blowback on social media, with accusations that the president was making light of one of the worst tragedies Native Americans have experienced. Mr. Trump previously invoked the Wounded Knee massacre, one of the deadliest attacks on Native American people by the United States military, in another jab at Ms. Warren.

“He actually is condoning a narrative that supports a genocide and a forced removal,” said Betsy Theobald Richards, who works on changing cultural narratives for The Opportunity Agenda, a social justice organization.

Ms. Richards, a citizen of the Cherokee Nation, said most people have been taught only the “dominant narrative” of history in the United States, which she said has long devalued the experiences and voices of Native American people.

“People don’t really realize these are real people who live among you,” she said. “These are their ancestors that are survivors, or carry on the memory of the people who were massacred or removed.”

For those who need a refresher, here is a brief history of the Trail of Tears:

What is the Trail of Tears?

In the 1830s, federal and state officials forced thousands of Native Americans from their land in the southeastern United States, including Georgia, Alabama and Tennessee. The forced relocation affected thousands of Cherokees, as well as the Creek, Chickasaw, Choctaw and Seminole tribes, among others.

The Native people were forced out of their homes and put in internment camps before they were pushed westward to designated Indian Territory, in present-day Oklahoma, according to the Trail of Tears Association, a nonprofit that works to preserve the historic trail and promote awareness.

Some 15,000 Native people died during the journey from exposure, malnutrition, exhaustion and disease, including about 4,000 Cherokees.

“It’s a terribly tragic event in Cherokee history and looms large,” said Jace Weaver, the director of the Institute of Native American Studies at the University of Georgia, who has studied the Cherokee removal.

What led to the forced relocation?

In the early 1800s, the federal government made an agreement with Georgia to remove all Native Americans from the state. But little was done to enforce it immediately, according to Dr. Weaver.

Then, in 1829, gold was discovered on Cherokee land in northern Georgia, which ramped up efforts to dislodge the Cherokees, according to the Trail of Tears Association. Around the same time, Andrew Jackson became president and began to “aggressively” pursue a policy of relocating Native populations, the association said.

Jackson signed into law the Indian Removal Act of 1830, which authorized the government to relocate Indian tribes in exchange for unsettled territory in the west.

Most Native Americans opposed the policy, and the Cherokee Nation brought a lawsuit in the United States Supreme Court. In one ruling, in 1832, the court sided with the Cherokees, Dr. Weaver said.

“They have this victory, but President Jackson refuses to enforce it,” he said. So, he said, “a group of Cherokees come to the view that removal is inevitable and they need to negotiate the best deal they can.”

In 1835, a faction of Cherokees signed a treaty with the federal government agreeing to move west to Indian Territory. The agreement, the Treaty of New Echota, “was illegal under the laws of the Cherokee Nation,” Dr. Weaver said, but it went into effect anyway.

“The Senate ratified the treaty despite knowledge that only a minority of Cherokees had accepted it,” the Trail of Tears Association said on its website.

On the journey west, the association said, a harsh winter and illnesses made death “a daily occurrence.” 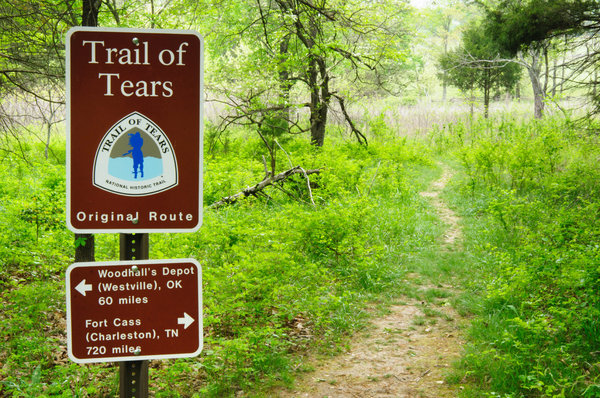 What is the legacy of the Trail of Tears?

In 1987, Congress designated the Trail of Tears a national historic trail. It covers nine states and thousands of miles.

Because of what is taught in school, many people have limited knowledge of events like the Trail of Tears and Wounded Knee, Ms. Richards said. “They’ve heard these terms, but they really don’t understand,” she said.

She advocated more Native American voices in Hollywood, the news media and the education system.

“It’s time for the United States to step up and integrate Native history and Native culture into curriculums,” she said. “Ignorance is no longer acceptable.”