The $2.3trn (£1.7trn) pandemic aid and spending package had been approved by Congress last week and it was understood that the White House was happy with its contents. 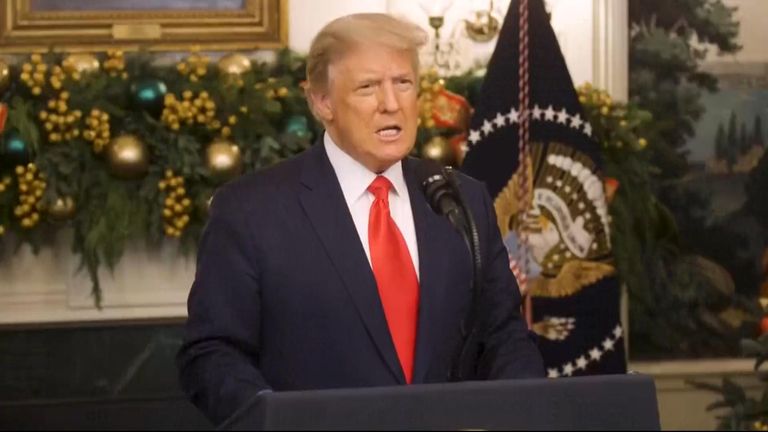 The larger amount had been rejected by his fellow Republicans.

Mr Trump, who leaves office on 20 January, backed down late on Sunday under intense pressure from both sides of the political spectrum.

In a statement about the bill signing, Mr Trump complained about what he considered to be “wasteful spending”.

He said: “I will sign the Omnibus and Covid package with a strong message that makes clear to Congress that wasteful items need to be removed.”

These notes would only be suggestions to Congress, however, and the bill as signed will not necessarily be changed.

Mr Trump also said that the Democratic-controlled House of Representatives planned to vote on Monday to increase the one-off payments and that the Senate would “start the process” of approving them.

Democratic House Speaker Nancy Pelosi said the president needed to encourage Republicans to “end their obstruction” and to support increasing the payments to $2,000.

The coronavirus has killed more than 333,000 people in the US and infected almost 20 million and left millions more without jobs.

The signing of the bill will mean that unemployment benefits being paid to about 14 million people through pandemic programmes will resume, having lapsed on Saturday.

The bill includes $1.4trn (£1.03trn) to fund government agencies through to September, as well as other priorities such as money for struggling transit systems and an increase in food stamp benefits.

Senate Majority Leader Mitch McConnell said: “The compromise bill is not perfect, but it will do an enormous amount of good for struggling Kentuckians (his home state) and Americans across the country who need help now.”