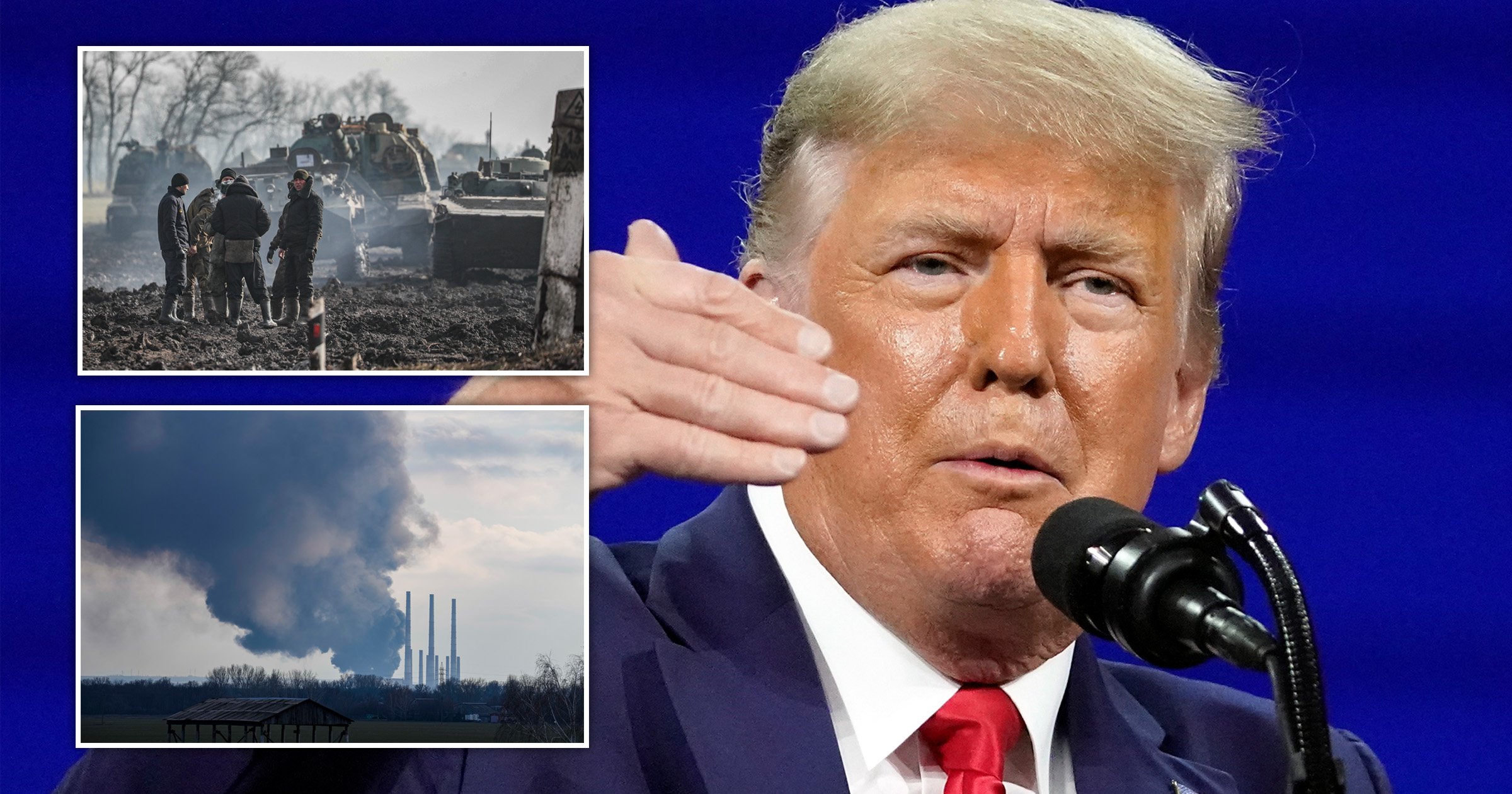 Trump’s critiques come after Putin acknowledged the areas of Donetsk and Luhansk as independent regions, including areas still under the Ukrainian government’s control, amplifying fears of further Russian military action.

‘I know Vladimir Putin very well,’ Trump said in a press statement. ‘And he would have never done during the Trump Administration what he is doing now, no way!’

Biden made the announcement of a ‘first tranche’ of new sanctions more directly targeting Russia on Tuesday afternoon, and asked Americans: ‘Who in the Lord’s name does Putin think gives him the right to declare new so-called “countries” on territory that belonged to his neighbors?’

The US will be imposing ‘full blocking’ or two large Russian financial institutions, and will be ready to amp up sanctions if Russia continues to escalate the situation, Biden said.

‘That means we’ve cut off Russia’s government from Western finance,’ he said. ‘It can no longer raise money from the West and cannot trade in its new debt on our markets or European markets either.’

In response, Trump called Biden’s sanction ‘insignificant relative to taking over a country and a massive piece of strategically located land,’ according to the Washington Examiner.

Trump also claimed that the US will suffer from higher and higher oil prices, and will make Putin richer and richer. Biden acknowledged that the new sanctions could lead to higher gas prices for Americans, but promised he would work to limit the impact.

‘Defending freedom will have costs for us as well and here at home,’ he said. ‘We need to be honest about that.’

The White House also recognized Russia’s actions as an invasion on Tuesday, just hours after 10,000 soldiers reportedly entered separatist-occupied areas overnight, with 6,000 sent to Donetsk, 5,000 to Luhansk and 1,500 to the city of Horlivka, according to the DailyMail.

‘It is difficult to believe [Putin] could have moved that quickly – but he had a long time to prepare,’ the Daily Mail’s source said.

The White House took a strong stance on its position, with Deputy National Security Adviser Jon Finer telling CNN: ‘An invasion is an invasion and that is what is under way.’

‘This is, yes, the beginning of an invasion, Russia’s latest invasion into Ukraine, and you’re already seeing the beginning of our response which we said will be swift and severe,’ Finer said.

Two European officials on Tuesday said that Russia had ordered troops into Ukraine, but Russia’s Foreign Ministry denied doing so. There has yet to be a clear sign of military escalation in eastern Ukraine, but despite this many Ukranians have fled the separatist regions by bus.

Ukrainian President Volodymyr Zelensky urged his country to ‘keep a cool head’ and insisted he would not yield territory to Russia.