TIJUANA, Mexico — A new Trump administration policy forcing certain asylum seekers to wait in Mexico while their cases are processed in the United States took effect on Tuesday, when American officials ushered the first such migrant through a Southern California border gate into northern Mexico.

The migrant, a 55-year-old man from Honduras, had applied for asylum in the United States after crossing the border from Mexico. Under the new policy, he will live in Mexico temporarily, returning to the United States only for court dates pertaining to his case.

Dressed in a brown jacket and black cap, he looked dazed as he emerged late Tuesday morning on the Mexican side of the border in Tijuana and was swarmed by scores of reporters, photographers and television cameramen.

“I’m very tired,” he mumbled before being quickly spirited away in a van by Mexican migration officials.

The new policy, first announced in December by Trump administration officials, is a dramatic step in what they cast as an effort to rein in asylum fraud and illegal immigration. It represents a major shift from a longstanding practice that permitted most migrants who requested asylum to go free in the United States while they awaited the outcome of their cases.

American officials said that under that policy, many asylum applicants would never show up for their court dates and would simply vanish into the interior of the country.

If the policy is applied to a majority of asylum applicants on the Mexico-United States border, it could result in thousands more migrants flooding Mexico’s border states every year. 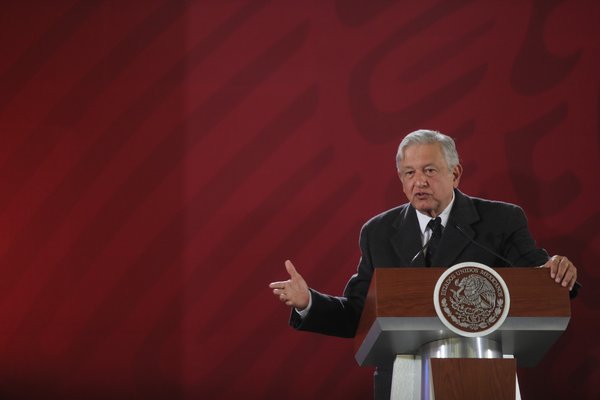 Mexican officials said that while they disagreed with the Trump administration’s new policy, they have agreed to take in certain asylum seekers and vowed to protect the migrants’ human rights and allow them to work in Mexico while their cases unfold in the United States.

Rodulfo Figueroa, an official with Mexico’s National Migration Institute, said the man in the brown jacket, whose name was not revealed, would be the only migrant returned to Mexico on Tuesday under the new policy, but that more are expected soon.

Since the Trump administration’s announcement of the new asylum policy, Mexican officials have been negotiating with their counterparts in Washington to define the conditions under which they would accept the migrants.

On Monday night, Tonatiuh Guillén López, the commissioner of Mexico’s National Migration Institute, said Mexico would only accept migrants from El Salvador, Guatemala and Honduras between the ages of 18 and 60. He also said that Mexico would only receive returned asylum seekers through the border crossing that connects Tijuana with San Diego, California.

The returned asylum seekers will be granted special four-month, multiple-entry visas that would allow them to travel to the United States for their court dates and then once again return to Mexico, Mexican officials said. Some of the returnees will already have one-year humanitarian visas which allow them to work and travel freely in the country. Asylum cases in the United States can take years to resolve, yet it remained unclear whether and under what terms the Mexican visas would be extended.

The American policy change applies to some asylum seekers who try to enter the United States at official crossings on the country’s southern border, or are apprehended on American soil after trying to cross illegally. But it will not apply to Mexican asylum seekers who might risk harm if returned to Mexico, the very place where they are claiming fear of persecution as grounds for their asylum claim.

Migrants’ advocates and human rights groups have vociferously criticized the American policy shift, saying Mexico, which is suffering historic levels of violence, is not a safe place to send people who already fear for their lives. In addition, Tijuana and other border towns are already overwhelmed with migrants deported from the United States as well as migrants from Central America and elsewhere seeking to enter the country.

In meetings in recent days, American immigration officials have assured advocates that the returns would be conducted in close coordination with Mexican officials, who will preapprove all returnees. For now, the officials said, only single adult males in good health would be sent back to Mexico.

While the Mexican government has claimed that the policy implementation was a unilateral American move, the United States immigration officials, from the Customs and Border Protection agency, assured the advocates that they had been working with their Mexican counterparts at all levels for months and would continue to be in daily contact for at least the next 30 days while the program was gaining speed.

American advocacy groups are expected to file legal challenges to the new policy in the coming days, after gathering evidence from its rollout.

President Andrés Manuel López Obrador of Mexico has said he wanted to welcome migrants and foster employment opportunities for them, and he has begun to follow through on his promises, encouraging immigrants to stay and work in Mexico by making it easier to get visas and promoting job-creation strategies.

Some asylum seekers who had just arrived in Tijuana were surprised to hear on Tuesday about the new American asylum policy.

Anabel España, 39, a Honduran migrant who hoped to apply for asylum in the United States, said that staying in Mexico for many months was never her plan.

“We don’t know what can happen to you here, if you will be kidnapped,” she said. “Tijuana is not exactly the safest place, you know?”

But Ms. España, who said she had fled extortion threats in Honduras, said at least she could work and wouldn’t be held in a detention center in the United States.

“At least here we are free,” she said.