A recorded speech by President Trump was scheduled but conspicuously missing as the United Nations commemorated its founding after World War II. 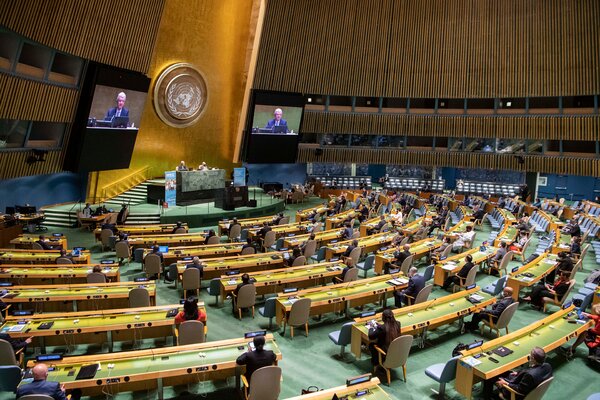 With nods to its founding from the ashes of World War II, the United Nations officially celebrated the organization’s 75th year Monday in a somber and largely virtual event streamed on the internet because of the coronavirus pandemic.

Wearing face masks and spaced far apart, one or two diplomats from each of the 193 member states sat in the cavernous General Assembly hall at the U.N. Manhattan headquarters, which in ordinary times would have been packed with leaders and dignitaries from all over, hobnobbing in what is the world’s largest diplomatic stage.

While Secretary General António Guterres and other U.N. officials gave speeches from the podium, all other leaders delivered their congratulatory remarks via prerecorded videos, giving the event a stilted and contrived flavor.

The event also was notable for a conspicuous absence — though it was scheduled, there was no recorded speech from the leader of the host country, President Trump. A frequent critic of the United Nations, he was to have been the first to speak among 84 heads of state or government on the list. The deputy permanent representative of the U.S. Mission to the United Nations spoke instead.

There was no immediate explanation provided by American or U.N. officials for the absence of Mr. Trump, although he is expected to represent the United States during the annual General Assembly speeches from national leaders that begin on Tuesday. They, too, will be done via prerecorded videos.

United Nations officials decided in June that it was impossibly risky to hold the annual General Assembly gathering in person because of the coronavirus pandemic, opting instead for virtual web meetings for almost all of the proceedings.

While that decision spared New Yorkers the annual hassle of blocked streets and extraordinary police security to protect visiting world leaders and their entourages, many diplomats, including Mr. Guterres, have expressed regret about the loss of person-to-person diplomacy that the event has always cultivated.

Mr. Guterres used the anniversary to extol the United Nations for its role in preventing a third world war, but he also was blunt about the cascading crises that include regional conflicts, hunger, poverty and climate change — all exaggerated by the pandemic.

“It took two world wars, millions of deaths and the horrors of the Holocaust for world leaders to commit to international cooperation and the rule of law,” Mr. Guterres said. “Never in modern history have we gone so many years without a military confrontation between the major powers. This is a great achievement of which member states can be proud — and which we must all strive to preserve.”

Still, he said, multilateralism — countries large and small collaborating for solutions, a principle enshrined in the U.N. Charter — has been increasingly tested, if not ignored.

“Climate calamity looms,” he said. “Biodiversity is collapsing. Poverty is again rising. Hatred is spreading. Geopolitical tensions are escalating. Nuclear weapons remain on hair-trigger alert. Transformative technologies have opened up new opportunities but also exposed new threats. The COVID-19 pandemic has laid bare the world’s fragilities. We can only address them together.”

The delegates also unanimously adopted a resolution celebrating the accomplishments of the United Nations. “There is no other global organization with the legitimacy, convening power and normative impact,” the resolution states.