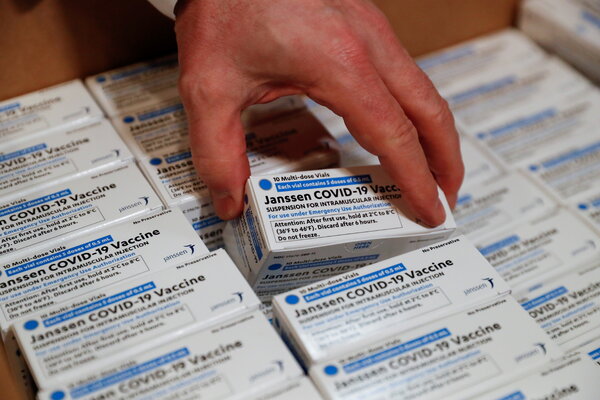 Federal health officials are investigating “a handful” of new, unconfirmed reports that have emerged after Johnson & Johnson injections were paused nationwide, to determine whether they might be cases of a rare, serious blood clotting disorder that caused the pause, the director of the Centers for Disease Control and Prevention said Monday. It is unclear as yet whether the vaccine was responsible for the original few cases.

“Right now, we are encouraged that it hasn’t been an overwhelming number of cases but we are looking and seeing what has come in,” the director, Dr. Rochelle Walensky, said at a White House news conference on the pandemic.

Last week, federal health officials said they wanted vaccine recipients and medical providers to be aware of the original cases and to report any incidents of serious adverse reactions to the shots. Health officials called for the pause after six women ages 18 to 48 developed the blood clotting disorder within about one to three weeks after Johnson & Johnson injections. One died, and as of last week, a second remained hospitalized in critical condition.

On Wednesday, two more cases were added to the list: a seventh woman, and a man who participated in Johnson & Johnson’s clinical trial. Seven of the eight recipients had blood clots in the brain. The clotting disorder seemed to be combined with low levels of platelets, blood cells that typically prevent clotting. The cases were reported either to the C.D.C.’s database or directly to Johnson & Johnson.

Dr. Walensky said Monday that officials are pursuing the more recent reports “and verifying whether they do in fact reflect a true case.” Officials will present their findings on Friday to an C.D.C. advisory committee meeting, she said. The committee’s experts could recommend lifting the pause, modifying it or limiting the use of the vaccine.

Dr. Anthony S. Fauci, a White House medical adviser, said on NBC’s “Meet the Press” on Sunday that he seriously doubts the vaccine will be permanently pulled. But he said, “I do think that there will likely be some sort of warning or restriction or risk assessment.”

Experts are trying to determine whether the rare blood clotting disorder is in fact linked to the Johnson & Johnson vaccine. The investigation follows actions by European regulators who concluded that another vaccine — developed by AstraZeneca and based on a similar technology — may be linked to a rare clotting disorder.