At a recent gun show, people roamed the aisles in Black Lives Matter T-shirts and MAGA hats. “It’s a giant room of ‘you never know.’” 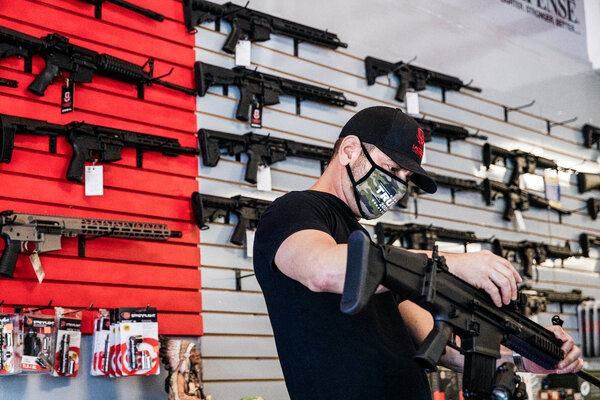 By Dionne Searcey and Richard A. Oppel Jr.

CHANTILLY, Va.— Like many Americans, two women a thousand miles apart are each anxious about the uncertain state of the nation. Their reasons are altogether different. But they have found common ground, and a sense of certainty, in a recent purchase: a gun.

Ann-Marie Saccurato traced her purchase to the night she was eating dinner at a sidewalk restaurant not long ago in Delray Beach, Fla., when a Black Lives Matter march passed and her mind began to wander.

It takes only one person to incite a riot when emotions are high, she remembers thinking. What if the police are overpowered and can’t control the crowd?

Ashley Johnson, in Austin, Texas, worries about the images she’s seen in past weeks of armed militias showing up to rallies and making plans to kidnap governors. The outcome of the election, she thinks, will be devastating for some people regardless of the winner.

“Maybe I’m just looking at the news too much, but there are hints of civil war depending on who wins,” Ms. Johnson said. “It’s a lot to process.”

In America, spikes in gun purchases are often driven by fear. But in past years that anxiety has centered on concerns that politicians will pass stricter gun controls. Mass shootings often prompt more gun sales for that reason, as do elections of liberal Democrats.

Many gun buyers now are saying they are motivated by a new destabilizing sense that is pushing even people who had considered themselves anti-gun to buy weapons for the first time — and people who already have them to buy more.

The nation is on track in 2020 to stockpile at record rates, according to groups that track background checks from F.B.I. data. Across the country, Americans bought 15.1 million guns in the seven months this year from March through September, a 91 percent leap from the same period in 2019, according to seasonally adjusted firearms sales estimates from The Trace, a nonprofit news organization that focuses on gun issues. The F.B.I. has also processed more background checks for gun purchases in just the first nine months of 2020 than it has for any previous full year, F.B.I. data show.

F.B.I. data shows sales spiked earlier this year as virus fears spread. And sharp increases in sales are seemingly occurring everywhere: The states with the lowest jump in sales in September, for example, were Alaska and North Dakota, each up about one-third compared with September 2019. States with the largest gains included Michigan, up 198 percent over September 2019, and New Jersey, up 180 percent, according to estimates by The Trace.

It’s difficult to know exactly who is buying guns at any certain time in America. Gun shop owners, gun rights groups and gun lobbying groups said they were now selling more weapons than usual to Black shoppers, and to women in particular, and more weapons to first-time gun owners generally.