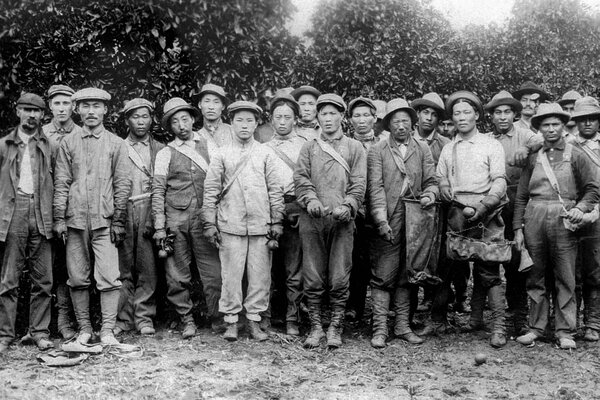 It was 1904 when Ahn Chang-Ho, the revered Korean independence activist and Korean immigrant leader, left San Francisco for Riverside.

Drawn by the booming citrus industry that made the city one of California’s richest at the time, Ahn started an employment agency to help other Koreans find work nearby. Slowly, a settlement grew from a few dozen to a few hundred residents. At its height, almost 1,000 people were living in what was known as Pachappa Camp, named for the street where it was started.

Life there was difficult: The settlement was segregated. The wooden shacks that housed its residents had initially been built by railroad construction workers in the 1880s, and deafeningly loud trains would regularly rumble past. There was no running water or electricity.

Much of that wasn’t unusual in the communities where California’s first Asian residents lived. Japanese immigrants toiled in the fields and lumber mills of the American West at the turn of the 20th century. Chinese immigrant workers endured treacherous conditions as they built the Transcontinental Railroad through mountains and desert.

But Pachappa Camp was unique, said Prof. Edward T. Chang, a professor of ethnic studies and the founding director of the Young Oak Kim Center for Korean American Studies at the University of California, Riverside.

For one thing, he told me recently, “it was a family settlement” — as opposed to the mostly bachelor societies formed by other immigrant laborers. Men and women lived together at Pachappa Camp.

The biggest thing that set Pachappa Camp apart, however, was the fact that it was a distinctly Korean community — the first in the United States, predating the founding of Los Angeles’s Koreatown by the businessman Hi Duk Lee by more than half a century.

And while Ahn’s life and legacy have been deeply studied, extensively documented and honored, his role in founding a Korean community in Riverside was virtually unknown until about five years ago, when Chang stumbled across a 1908 map issued by an insurance company. It had a caption labeling a Korean settlement in Riverside.

“I thought, ‘Korean settlement? In Riverside?’” he said.

Chang said it was known that Ahn spent some time in Riverside. He had seen an image of Ahn picking oranges there. And a 1913 episode known as the Hemet Valley Incident — which involved Korean fruit pickers Chang later determined had come from Riverside — has been widely cited as a pivotal moment for the Korean national identity.

But what Ahn was doing in the Inland Empire for more than five years before he moved his family to Los Angeles in 1913 was a puzzle. That puzzle turned into what Chang described as the most gratifying research of his career.

“People said it’s like destiny,” he said. “I’ve been teaching in Riverside for almost 30 years, and I didn’t know anything about it.”

As it turned out, Pachappa Camp was also a place where Ahn honed many of the democratic ideas that he brought back to Korea, which had been a monarchy and was occupied by Japan.

“I was able to trace the birth of whole democratic institutions to here in Riverside,” Chang said. “I was uncovering all of this and I was so shocked.”

With the help of graduate student interns from Korea who translated documents from older Korean, Chang last month published a book of his findings, “Pachappa Camp: The First Koreatown in the United States.”

Chang himself moved to Los Angeles from Korea with his family as an 18-year-old in 1974. He enlisted in the Army in part to force himself to learn English, and eventually became one of the first scholars in the nation to get a Ph.D. in ethnic studies from U.C. Berkeley.

He said that it had been powerful for him to be able to help strengthen the historical foundations of Asian-American identity — and poignant to see parallels between history and the fraught present.

Chang said that it was frustrating that it took a surge in anti-Asian hate to bring the issue to the fore. Still, he said, “Asian-American invisibility in the national dialogue on race is finally being cracked.”

The National Oceanic and Atmospheric Administration issued its latest “climate normals” map, and it shows just how hot the U.S. is becoming.

Attorney General Rob Bonta announced on Thursday that his office would conduct an independent review of the death of Sean Monterrosa, who was shot and killed by Vallejo police officers last June during demonstrations against police brutality, The Vallejo Times-Herald reports.

Kevin McCarthy, the House Republican leader, said no one was “questioning the legitimacy” of the 2020 election, even though numerous Republican lawmakers continue to do so.

The ransomware attack that hit Scripps Health this week was not an anomaly. The attacks have become rampant during the pandemic, The San Diego Union-Tribune reports.

It’s unclear whether California will update its mask mandate in accordance with new federal health guidance, which says that people who are fully vaccinated against the coronavirus may stop wearing masks or maintaining distance in most settings, The Associated Press reports.

About 30 million Americans are open to getting a vaccine, but have not done so, and their reasons are complex.

The Atlantic argues that California’s recall law is broken and doesn’t work in our age of hyperpartisan politics.

The Sacramento Bee explored why cremations exceeded burials among the state’s Latino population during the pandemic.

The state’s coastal trail, which would run 1,230 miles from Mexico to Oregon, is now about 70 percent complete, The Mercury News reports.

Eater Los Angeles took a look inside the Oasis at Death Valley, and how the lush resort in Death Valley feeds its clientele in one of the world’s least hospitable climates.

“If there was ever a perfect time to make a life change, this is it,” The Times’s Well columnist Tara Parker-Pope wrote this week.

Behavioral scientists have long said that times of disruption and transition are also opportunities for growth. And, well, I don’t need to tell you we’ve all experienced a lot of disruption lately.

So on Monday, Tara will kick off Well’s Fresh Start Challenge, sending readers daily texts with tips for mindful living, forging deeper connections with friends and family, and building healthy habits. To sign up, just text “Hi” (or any word) to 917-809-4995 for a link to join. If you don’t want to receive texts, you can still join in online.

A programming note: I will be out on vacation for the next couple of weeks, but my colleagues will keep you up to date on everything you need to know.