DONNA, Texas — Two giant construction cranes tower over harvested sugar cane fields, topped by a pair of checkered flags flapping in the wind. At a distance along this flat, rural stretch of the Rio Grande Valley in South Texas, the two structures standing between the cranes resemble forlorn drive-in movie screens.

The twin panels of 18-foot-tall steel beams do not look like much — the only signs indicating it is a construction site warn “Road Closed” and “No Trespassing” — but they were milestones of a sort.

Nearly three years after President Trump took office, the two steel squares, newly installed and still incomplete about a mile north of the Rio Grande, are the first new sections to be built of the wall the president has promised to construct along the 1,900-mile southwestern border.

More than two years ago, the United States Army Corps of Engineers began drilling and taking soil samples along the border, and work has steadily proceeded in the years since, in California, Arizona and New Mexico. But the work until now improved and replaced existing barriers. Construction on the first new section of border wall, where nothing stood previously, started just south of Donna, Texas, in late October.

It began months behind schedule. It will cost about $167 million. And when it is done, this landmark section of the contentious wall project — a symbol of Mr. Trump’s presidency and a flash point for his critics — will extend the hard border with Mexico by just eight miles.

There are hundreds more miles to go.

The government has been racing to meet a deadline — the president’s promise to build approximately 500 miles of border fencing by the end of 2020. According to Customs and Border Protection officials, about $9.8 billion has been set aside in funding from the Department of Defense, the Department of Homeland Security and a Treasury Department asset-forfeiture fund.

“We think we can get it close to 500 miles by the end of next year, depending on certain terrain conditions,” Mr. Trump told reporters in September as he showed off the steel bollards recently erected near San Diego, adding, “We’re building it at breakneck speed.” 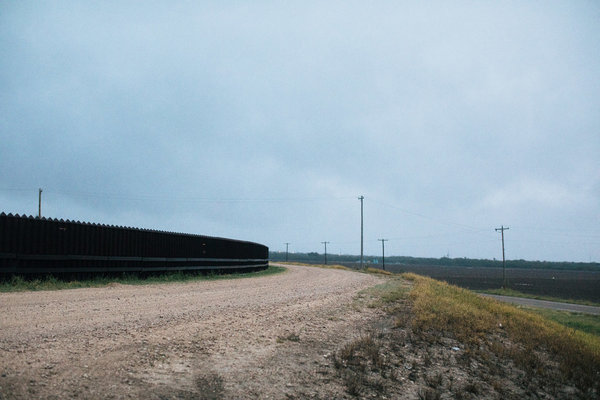 Construction of the eight miles of wall in Donna had been scheduled to begin in February but did not fully get underway until late October. The project will take months to complete. About 30 miles west of the Donna site, near a state park, crews have cleared land in preparation for more new wall construction that, along with three other sites, constitute the work to be done in Hidalgo County.

Similar preparations are underway across other stretches of the southwestern border.

All told, about 76 miles of replacement wall have been completed along the border, federal officials said, meaning that more than 400 miles must be installed in about 60 weeks to meet the deadline.

Construction executives and those involved in construction of the previous sections of border fence built during the administration of George W. Bush said it was a tough deadline to meet, but was indeed possible.

“I would’ve told you 15 years ago: ‘What are you smoking?’” said Victor Manjarrez Jr., a former Border Patrol sector chief in El Paso who helped oversee the erection of the Bush-era border fence in the late 2000s. “But now, the big difference is it’s not just D.O.D. resources. It’s contractors now who are working a hell of a lot faster than we ever could have imagined.”

Mr. Manjarrez said that during the earlier construction, crews completed “anywhere from a quarter-mile to a third of a mile a day.” Agents overseeing the current South Texas work have been running on short sleep and fielding phone calls at all hours of the day, a scenario familiar to Mr. Manjarrez.

Karl Rove, then a senior presidential adviser, wanted daily updates on the wall’s progress, Mr. Manjarrez said. Mr. Rove, he said, tallied the progress not in miles but in feet, in daily updates dubbed the “Wall Dashboard.”

America’s southwestern border with Mexico spans four states and nearly 2,000 miles, but it has long been mostly unfenced, with barriers covering about 650 miles. Some of the controversies that delayed and complicated efforts by previous presidents to build new fencing continue to hamper the current project.

Some private landowners along the Rio Grande whose property is needed for the wall are fighting the government in court, with new lawsuits filed “all the time,” said Ricky Garza, a lawyer with the Texas Civil Rights Project. Legal challenges by landowners who objected when the Bush administration tried to build a border wall have dragged on for over a decade. As of earlier this year, there were more than 60 Bush-era cases involving landowners still pending, Mr. Garza said.

Other delays abound. Fisher Sand & Gravel, a North Dakota construction contractor, challenged the government’s bidding and selection process for border-wall contracts in court and in a complaint filed with the Government Accountability Office. The challenges were later dismissed, but not before setting back timetables.

For all the public debate over the need for a wall — and the protests and congressional standoffs that accompany it — the actual construction sites have operated smoothly, with little fanfare.

In South Texas, the work has unfolded in the rural areas of counties that Hillary Clinton easily won in 2016, often communities dominated by Mexican-Americans with substantial family and business ties across the river in Mexico. Some local officials have passed resolutions opposing the wall, but any public outcry has been muted. Many Hispanic Democrats in Hidalgo County, where the Donna work is taking place, oppose the president’s tough policies targeting immigrants but support border-security measures such as fencing; many have friends and relatives who are Border Patrol agents.

Donna, a town of nearly 17,000 with a median household income of $30,000, was where Army soldiers set up a base camp last year during Mr. Trump’s troop deployment to the border. The mayor, Rick Morales, said he had no problem with the construction work.

“I do believe that there has to be some type of barrier,” Mr. Morales said. “We have a natural barrier, which is the river, but we have a lot of drug smuggling and human smuggling in this area.”

Other elected officials have been less supportive, questioning whether a wall is worth the trouble and the money. They discounted promises that the construction would bring substantial new jobs.

“We have a president that says he got elected on a promise to build a border wall,” said the top elected official in Hidalgo County, Richard Cortez, who serves as the county judge and is a Democrat. “Well, I think that we have to have better reasons to build a border wall than a campaign promise. I’d rather spend the millions on the drainage problems we have down here.”

On Thursday, Border Patrol agents led reporters on a 15-minute tour of the construction site outside Donna.

The site seemed swallowed up by the surrounding farmland. A long stretch of concrete slab that formed the base of the two steel panels was stamped “15,000 lbs.” With most of the workers gone for the day, there was little else to see.

A Texas construction company, SLSCO, was awarded the $167 million contract for work at the sites in Hidalgo County last year, and is also contracted with the federal government to do other border-wall projects.

Border Patrol officials said the wall sections under construction in Hidalgo County would ease the pressure agents face in the Rio Grande Valley Sector, the agency’s busiest border zone. Forty percent of migrant apprehensions along the southwestern border take place in the sector. The new wall will likely help stop or slow illegal border crossings, agents said, as most migrants and smugglers seek out crossing points that are unfenced. Only 55 of the sector’s 277 miles of border have fencing.

“They’re going to the point of least resistance,” said Christian Alvarez, a supervisory agent in the sector. “You just have more operational control. When there isn’t a barrier there, we’re trying to control the flow.”