A United Airlines flight with 331 people on board experienced engine failure over a suburb of Boulder, Colo., on Saturday afternoon, shedding debris across three neighborhoods before landing safely in Denver, the authorities said.

There were no injuries reported, officials said.

The flight, No. 328, took off from Denver International Airport at 12:15 p.m. local time, said Alex Renteria, an airport spokeswoman.

The F.A.A. said that the plane, a Boeing 777-200, experienced “a right-engine failure” shortly after takeoff and that it was aware of reports of debris “in the vicinity of the airplane’s flight path.”

The flight was headed from Denver to Daniel K. Inouye International Airport in Honolulu when the episode happened.

David Gonzalez, a press representative from United, said the flight had 321 passengers and 10 crew members on board. The flight was met by emergency responders as a precaution when it returned to Denver.

The police in Broomfield, Colo., which is about 15 miles southeast of Boulder, said unspecified pieces of the plane fell across three neighborhoods around 1:08 p.m. local time.

A video on Twitter showed an engine that was on fire and was missing parts of its casing.

Rebecca Schulte, a resident, said she saw two pieces that fell just a few houses away from her home. She describe hearing a “mild sound” that she compared to an empty dump truck going over a pothole and then she heard sirens.

When she investigated further, she said, she found a “large metal ring” that landed on the front steps of a nearby home, striking the handrail.

“How it missed the house is beyond me,” she said. She said the metal ring was about 10 feet across. 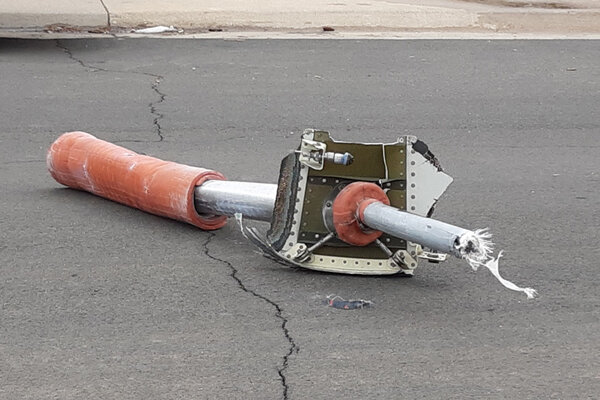