Two US militia members tracked down by Sky News have been arrested in connection with the rioting at the US Capitol.

A crowd of Trump supporters stormed the building – the heart of America’s democracy – during violent clashes with police on 6 January following an address by the outgoing president.

They are being held in Montgomery County Jail in Ohio after turning themselves in on Sunday.

The FBI said Watkins posed a video on the microblogging site Parler on 6 January where she said “Yeah. We stormed the Capitol today. Teargassed, the whole, 9. Pushed our way into the Rotunda. Made it into the Senate even,” according to an affidavit reported by local media. 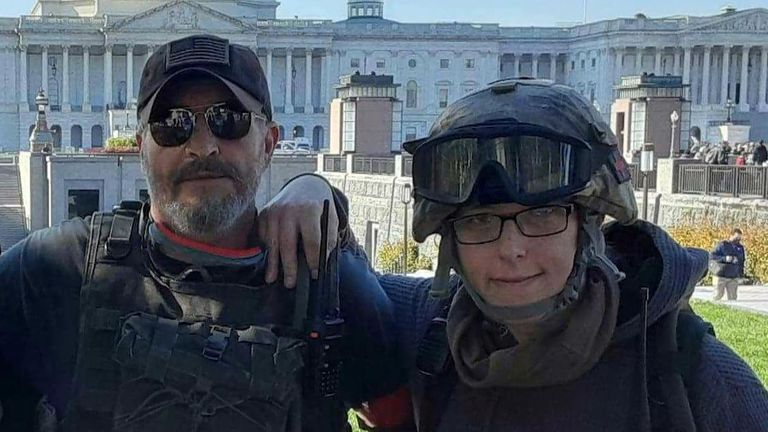 Sky’s forensics unit sifted through hours of footage taken on the day of the unrest to pinpoint militia members in the midst of the Washington mob.

The unit also went through numerous messages posted on a number of social media platforms.

One of those identified was 38-year-old Watkins who served in the US army in Afghanistan and is the commander of a local armed militia called the Ohio Regular Militia.

Militia members told Sky News the group existed to “protect people at protests”, was non-partisan and helped those injured from all political persuasions.

Watkins was spotted in the crowd outside the Capitol at the back of a line of “Oath Keepers” making their way inside the building. 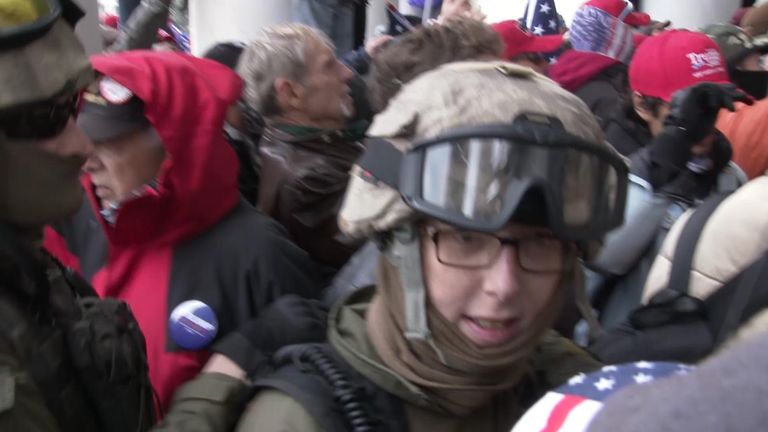 The Oath Keepers are all dressed in camouflage combat gear with ballistic helmets and body armour and their militia name written in yellow on their backs.

In video footage, they seem to be moving in formation in a human chain with one hand on each other’s shoulders as they snake their way up the steps.

The Oath Keepers also describe themselves as a nonpartisan association and are made up of tens of thousands of former military, police and other state agencies whose pledge is to defend the constitution.

One of those who belongs to Watkins’ militia, and who was also spotted outside and inside the Capitol building, is former marine Crowl. Watkins runs a bar in Ohio but declined to speak to Sky News when a team arrived outside her home.

Although the team also repeatedly attempted to contact Crowl by telephone and visited his house several times, there was no answer.