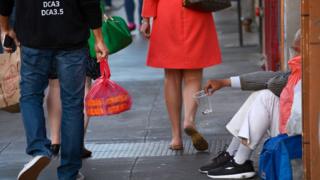 The leaders of a California based-church have been accused of imprisoning homeless people, forcing them to beg all day and taking the money.

Dozens of victims had their papers taken, their welfare benefits stolen and were punished if they spoke of “things of the world”, officials say.

Imperial Valley Ministries (IVM) operates about 30 affiliate church groups in the US and Mexico.

A dozen of the group’s leaders were arrested on Tuesday.

Eleven others were held in El Centro, California, and Brownsville, Texas.

The church, which represents its pastors as “missionaries to drug addicts”, lured victims by promising them food and shelter and opportunities to get back on their feet at “no cost”, federal officials say.

“The indictment alleges an appalling abuse of power by church officials who preyed on vulnerable homeless people with promises of a warm bed and meals,” the lead prosecutor, US Attorney Robert Brewer, said at a news conference after the arrests.

“These victims were held captive, stripped of their humble financial means, their identification, their freedom and their dignity.”

A statement from the prosecutor added that “windows were nailed shut at some group home locations, leading a desperate 17-year-old victim to break a window, escape, and run to a neighbouring property to call police”.

Victims were allegedly locked in group homes, and forced to beg for nine hours a day, six days a week.

According to prosecutors, victims were told “the only thing to be read is the holy bible” and “if any of the rules are broken there will be discipline”.

Punishments included the withholding of food, and if they asked to leave they were told their children would be taken away, it is alleged.

Church leaders refused to allow a diabetic victim with low blood sugar to obtain medicine, said officials. She was able to escape.

They were also banned from using the telephone, and told to avoid their family because “only God” loved them now, said officials.

If they did manage to leave, church leaders continued to withhold their money, along with important documents such as immigration paperwork and food benefit cards. 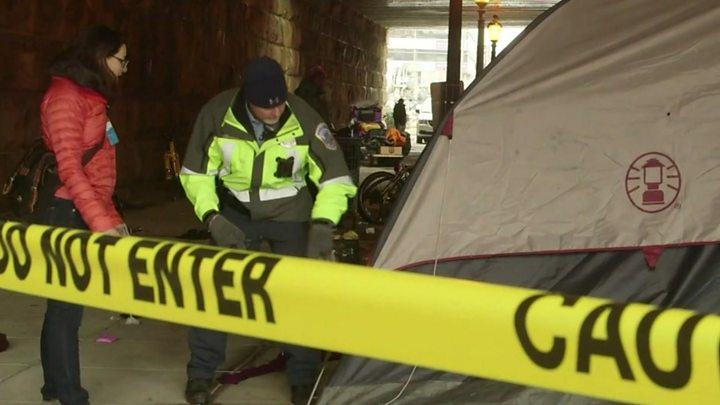 All of the victims have been identified and are now free, officials say.

Support services have been made available to them.

The case highlights the chronic problem of homelessness in California.

President Donald Trump has reportedly ordered White House officials to launch an initiative to address the issue, though California leaders are sceptical.