Emotional US legislative debate comes as big states and cities move ahead with sweeping reforms of police departments. 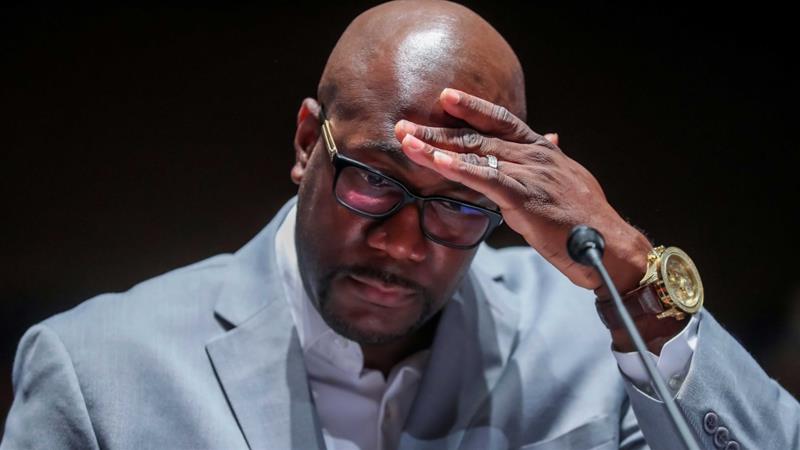 A still-grieving Philonise Floyd, the brother of George Floyd, testified on Wednesday before the United States Congress in support of police reforms proposed by Democratic politicians.

“I’m tired. I’m tired of pain, the pain you feel when you watch your big brother – who you looked up to your whole life – die, begging for his mom,” Floyd said.

“He did not deserve to die over 20 dollars. Is that what a Black man’s life is worth?” Floyd asked, as he called for justice for his late brother – whom friends and family called “Perry”.

Now, Democrats in the House of Representatives have introduced sweeping reform legislation to address police brutality. The bill is headed for a vote in the House by the end of June, but faces opposition from Republicans and President Donald Trump, setting up an emotionally-charged political contest going into November’s US elections.

Floyd died while being arrested by police in Minneapolis on May 25 on suspicion of attempting to buy cigarettes with a counterfeit bill. With Floyd handcuffed, face down on the street, and restrained by three cops, a white officer pressed his knee into Floyd’s neck until he went unconscious and his heart stopped beating. The scene was recorded by a bystander, and the video – distributed via social media – triggered protests and riots nationwide.

The House bill would ban chokeholds, end racial and religious profiling and eliminate judicial immunity for officers charged with abuse. A House vote could come by the end of June.

In the US Senate, five Republican senators led by Senator Tim Scott, the Senate’s only African-American Republican, are developing alternative legislation that may offer compromises to Democrats but would carry limited change.

Scott told reporters at the US Capitol that the bill would focus on training for police in de-escalation tactics but would not ban chokeholds or adopt other proposals Democrats want. Scott said he hopes to get a Senate vote on the bill by early July.

Meanwhile, throughout the US at local and state levels, public officials are proposing sweeping changes.

Trump is scheduled to meet with police officials in Dallas, Texas, on Thursday and will give remarks on his views of police reforms proposals, a White House spokesman told reporters.

In Minneapolis, where Floyd was killed, the city council has voted to dismantle the police department, which civic leaders judged cannot be reformed, and will seek to create a new public safety system.

New York City is discussing cuts to the police department’s budget and reallocating the funds to youth and social services. The New York State Legislature quickly passed a new law that will make police disciplinary records and misconduct complaints available to the public.

The mayor of Los Angeles has proposed a $250m reduction in the city’s police department and the redirection of the money to healthcare, jobs and community development in the Black community.

The proposed federal legislation would not directly defund police departments. Those decisions are made at the state and local levels.

The Democratic bill, however, would withhold federal funding from police departments that do not ban the use of chokeholds. It calls for a national registry of cops who are fired for misconduct.

Republicans and police unions oppose those changes in US policy and are accusing Democrats of taking a dangerous policy approach by slashing police budgets.

“It is pure insanity to defund our police, and the fact that our Democrat colleagues won’t speak out against that policy is crazy,” said Representative Jim Jordan, a Republican.

Great statement to Congress by @Jim_Jordan concerning de-funding (not!) our great Police. This Radical Left agenda is not going to happen. Sleepy Joe Biden will be (already is) pulled all the way Left. Many, like Minneapolis, want to close their Police Departments. Crazy!

Police unions are fighting back against the proposed budget cuts and new accountability measures. In Los Angeles, the police union called the mayor “unstable” and warned budget cuts would lead to greater crime.

At the House hearing, Darrell Scott, CEO of the National Diversity Coalition for Trump, described how budget cuts for police in Cleveland, Ohio have resulted in greater crime and decline in the US’s 15th largest metropolitan area.

“Defunding of our police departments has already happened and it has proven to be an epic fail,” Scott told Congress.

Democratic presidential candidate Joe Biden said on Monday in Houston as he met with Floyd’s family that he does not support “defunding” police, a rallying cry of the protesters.

“I support conditioning federal aid to police based on whether or not they meet certain basic standards of decency and honourableness,” Biden told a US television interviewer.

But the American Civil Liberties Union and other civil and human rights groups are calling for reductions in funding for police.

“We are calling for divestment from law enforcement agencies and reinvestment into the Black and Brown communities that have been harmed by over-policing and mass incarceration,” the ACLU said in a statement

“The role of police has to be smaller, more circumscribed, and less funded with taxpayer dollars,” the ACLU said.

Paul Butler, a law professor at Georgetown University, told Congress that, historically, violent protests by Black people in the US have always been sparked by police abuse.

“We need the police to stop killing us, to stop beating us up, to stop arresting us in situations in which they would not do those things to white people,” said Butler, who is African-American.

The Democrats’ proposed legislation “heralds the urgency of transformation”, said Butler, who is the author of a book titled  Chokehold: Policing Black Men.

The institutional structures of US police departments were established in the mid-1900s to enforce “Jim Crow” laws that discriminated against African-Americans, Davis said.

The US House legislation would provide federal grants to localities to develop new models of policing and community support. Davis called on Congress to collaborate with communities to “redefine and reimagine” policing.

Dan Bongino, a pro-Trump talk radio host and former Secret Service officer, warned that defunding police departments would shred “the thin all between civilization and chaos.”

“Please stop this defund-the-police abomination before someone gets hurt,” Bongino said