Donald Trump has hit out at an FBI investigation after his supporters were accused of trying to run a Joe Biden battle bus off the road.

Tensions rose in the final hours before Americans head to the polls, with the president tweeting: “In my opinion, these patriots did nothing wrong.”

Mr Biden’s team said they were forced to call 911 when the caravan of cars bearing Trump flags surrounded their campaign bus – and those in front tried to slow it down to a stop in the middle of a Texas motorway. On Saturday, Mr Trump has tweeted a video of the incident, adding: “I LOVE TEXAS!”

According to the Biden campaign, staff aboard the bus called 911 to report the incident, with local law enforcement responding to the calls and helping the bus reach its destination.

Neither Mr Biden nor his running mate, Kamala Harris, were on board the bus.

But speaking about the incident on the campaign trail in Philadelphia, Mr Biden said: “We’ve never had anything like this. At least we’ve never had a president who thinks it’s a good thing.”

The row intensified as the incumbent Republican leader and his Democrat challenger make their last-ditch appeals to voters in swing states. 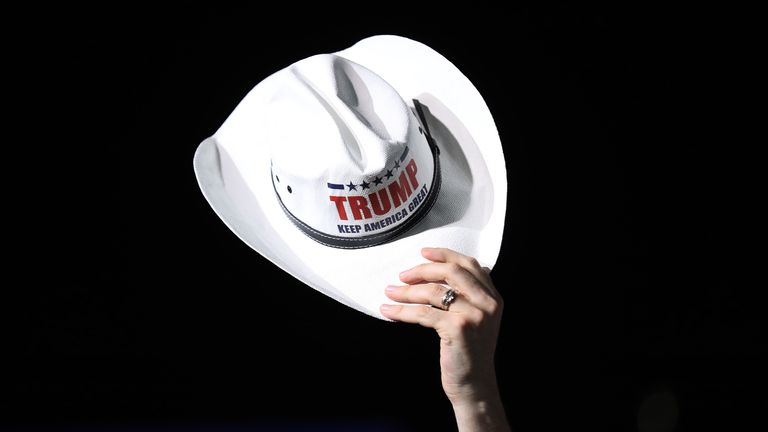 With polls due to open on Tuesday morning but a record number of Americans voting early or by mail, Mr Trump is holding five events across North Carolina, Pennsylvania, Michigan and Wisconsin.

Meanwhile, Mr Biden is focusing his efforts on one event in Ohio and three in Pennsylvania, even employing the star power of Lady Gaga.

Attention is also turning to the possible outcomes after Tuesday, with predictable scenarios thrown into the air due to the coronavirus pandemic and record high numbers of early voters and mail-in ballots.

But in anticipation of further campaigning and legal action, Mr Biden’s team have dispatched Barack Obama to call for last-minute donations to “make sure they can keep up the fight after election day, if necessary”. He is also using the former president to drive turnout with events in two other crucial toss-up states – Georgia and Florida.

Seeking to put COVID-19 and the US death toll of over 230,000 central to his campaign message, Mr Biden said to get control of the pandemic voters had to oust Mr Trump as “he is the virus”.

And continuing a row that has dominated the weekend, the former vice president addressed the video of Trump supporters encircling his bus. But Mr Trump defended his supporters against the FBI investigation, saying the organisation “should be investigating the terrorists, anarchists, and agitators of ANTIFA, who run around burning down our Democrat-run cities and hurting our people”.

He also revealed at a rally in Georgia that aides told him he did not have to visit the state, because “we have it made” there.

Analysis: What Trump and Biden’s final campaign stops say about their aims
By Greg Milam, US correspondent

Donald Trump has dusted off his 2016 manual in the hope it contains the secret to another election upset.

Four years ago, a breathless sweep through swing states in the final few days of the campaign reversed what the polls had been saying.

Trump believes the same is possible this year, with polls again showing him heading for defeat.

But they also show the president has so far failed to reach beyond the noisy, enthusiastic loyalists at his rallies and attract voters in the middle. That could be decisive.

His focus on places like Detroit, Philadelphia and Pittsburgh is an attempt to drive up turn-out among Black voters which, his campaign believe, could tip him into winning territory.

Florida and Arizona are also Biden targets – America’s “sun belt” and “rust belt” are where this election will be won and lost.

Scientists say it could be “necessary” in the future to vaccinate pets against COVID-19 to stop the spread of the virus. Coronavirus can infect a wide range…