Behind the White House, Washington DC erupted into a spontaneous street party.

Cheers fought with the sound of honking horns and applause as residents reacted to the news that Joe Biden had won the election.

“Get out of our house”, a group screamed towards the White House, as a huge Donald Trump balloon floated past, holding two signs saying “lose”.

Behind it, a line of women walked past banging pots and pans with kitchen utensils. They had clearly been at home when the news broke and dashed out to join the celebrations. 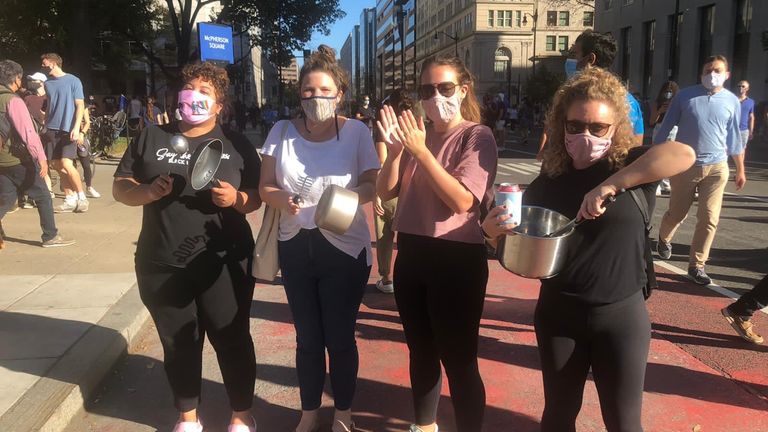 Biden-Harris flags fluttered in the breeze, as more and more people filled the streets.

Among the crowd was Emily Webb, 31. 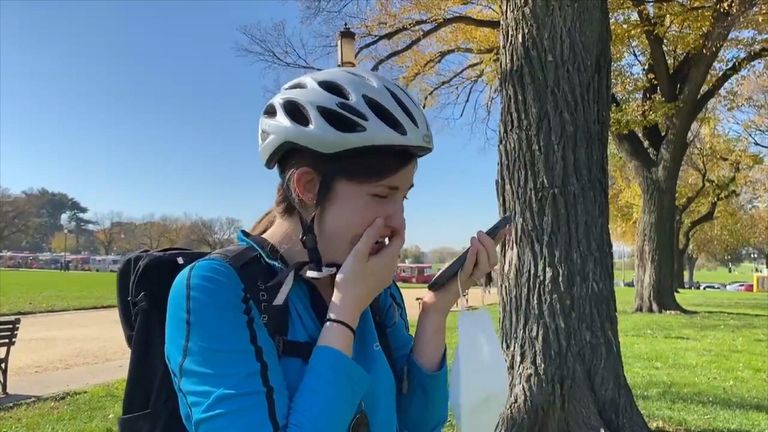 “I’m grateful to have a president who cares about human decency and human dignity for all Americans,” she said.

Law student, Hope, 26, added: “I’m super excited to be here today and very relieved we will finally have a president who will respect the constitution.” The moment of truth

Before the official announcement, a few hundred people had gathered in McPherson Square for a rally demanding Trump stand down.

When Biden’s win flashed up on a big screen, people immediately began singing, dancing and chanting.

With tears in her eyes, Janice Jamison told us she was overwhelmed. 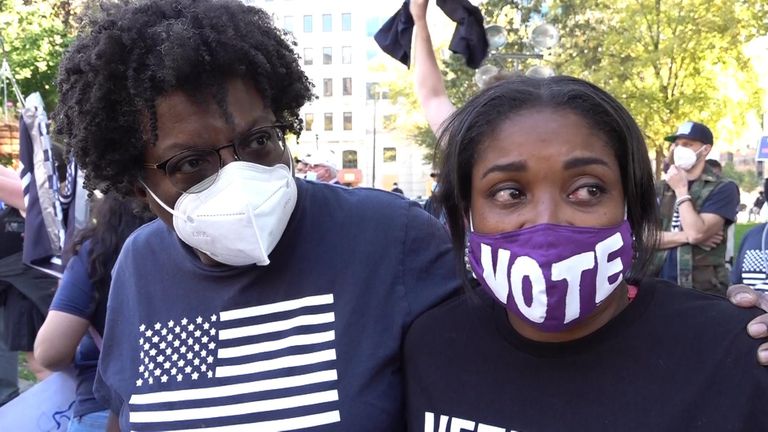 As a black gay woman she said the Trump years had been tough, now she was overflowing with pride at having the first female, African American vice president-elect.

“Finally someone who looks like me in the White House,” she said.

It was a view echoed by 22-year-old Laura Richardson. “I’m so happy to see someone who looks like me after all these years in the White House. It’s insane,” she said. 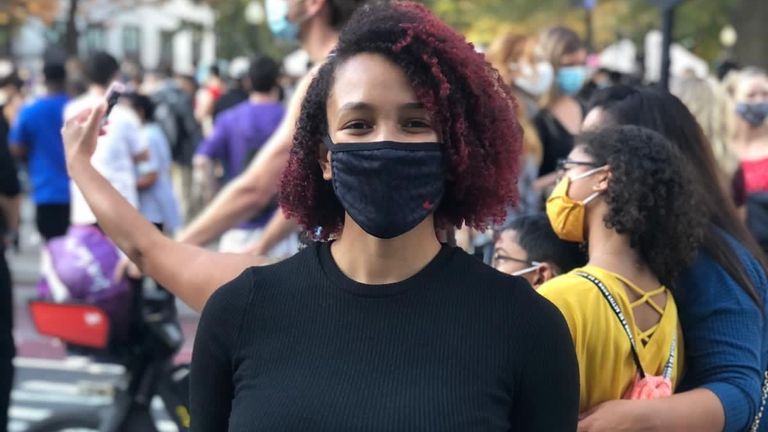 “Now you see so many different opinions and everyone’s against each other. Their unifying message is more important for a position of power than ever.” 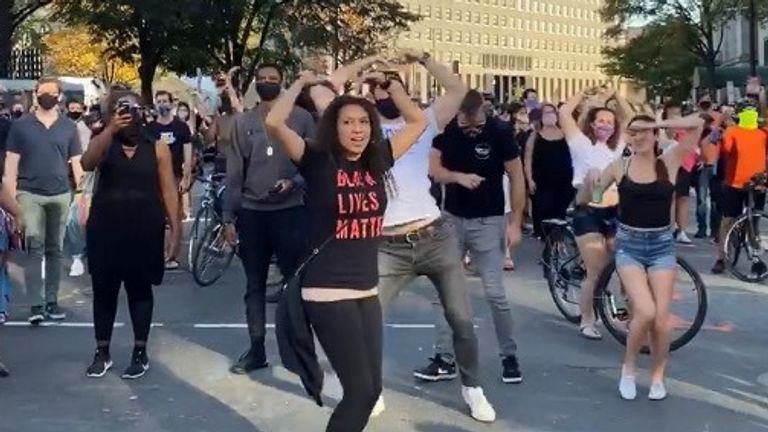 A truck decked out with speakers soon appeared blasting out YMCA.

The tune, which had recently become an anthem for some Republicans after Donald Trump bopped to it on stage, was today reclaimed by Biden supporters who broke out the moves in the middle of the street.

Jennifer Gold, 56, said it was disheartening that so many people voted for Mr Trump, but she hopes that they we can turn the tide. “I’m enormously relieved, and so tired,” she said. “I thought that’s all I would feel, but it’s such a thrill to be here. It’s a really great moment for some of America.”

Everywhere we looked were impromptu displays of joy.

In front of us, three people hugged each other. They may be friends but are just as likely strangers – it’s almost as if Biden supporters have been holding their breath and can finally relax. 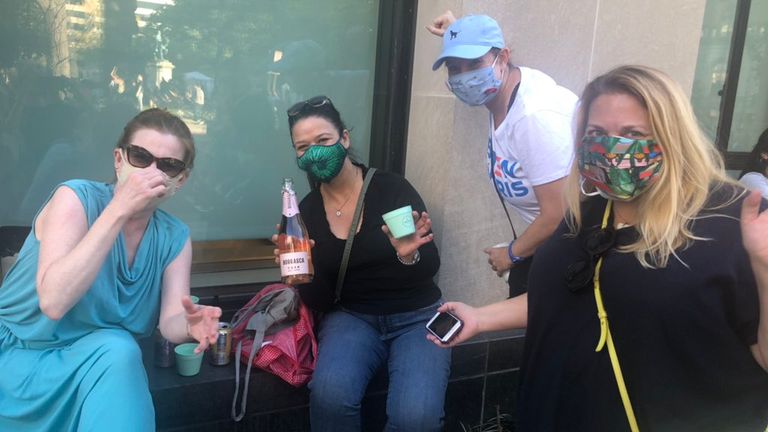 Another group of women popped some fizz as we passed. “That’s the sound of democracy,” they said.

Monica Nichols, 50, dressed for the occasion in a shiny gold catsuit with a sign on her back declaring, “Evict Trump”. 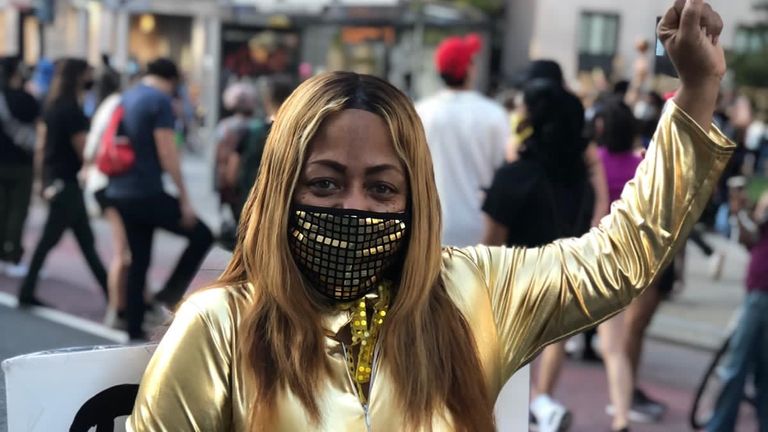 But America is bitterly divided and Joe Biden and Kamala Harris will now somehow have to reunite it.

The atmosphere is both a party and a release – those celebrating believe they have their country back after four difficult years.