Federal agents face accusations of excessive force as they operate in Portland against the wishes of local authorities. 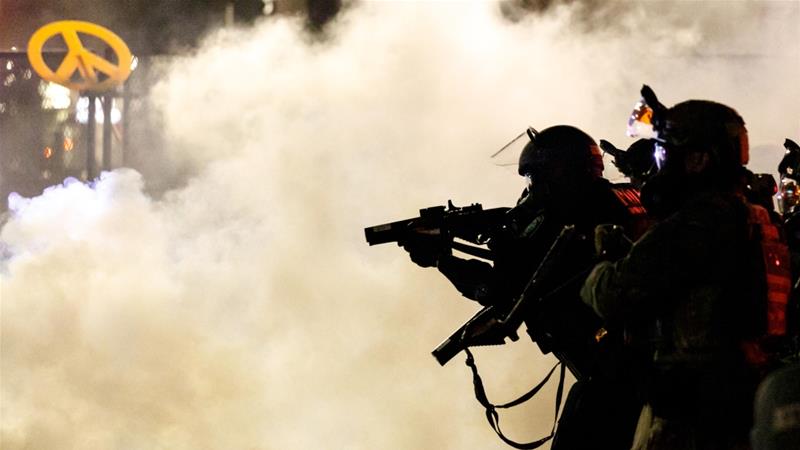 The mayors of six United States cities appealed on Monday to Congress to make it illegal for the federal government to deploy militarised federal agents to cities that do not want them, even as the administration of President Donald Trump is considering sending more of them to Portland, Oregon.

“This administration’s egregious use of federal force on cities over the objections of local authorities should never happen,” the mayors of Portland, Seattle, Chicago, Kansas City, Albuquerque and Washington, DC wrote to leaders of the US House of Representatives and Senate.

The Trump administration is sending at least 100 additional federal officers to Portland, Oregon, the Washington Post reported on Monday, as confrontations between anti-racism protesters and federal authorities have intensified.

US agents repeatedly fired what appeared to be tear gas, flash bangs and pepper balls at protesters outside the federal courthouse in downtown in Portland in the early hours of Monday.

Some protesters had climbed over the fence surrounding the courthouse, while others shot fireworks, banged on the fence and projected lights on the building.

Trump said Monday on Twitter that the federal properties in Portland “wouldn’t last a day” without the presence of the federal agents.

The city has had nightly protests for two months since the death of George Floyd, a Black man killed when a white police officer knelt on his neck for nearly nine minutes. Trump said he sent federal agents to Portland to halt the unrest, but state and local officials said they are making the situation worse.

Protests have ebbed and flowed nationwide since May. The past week has seen an increase in intensity. Protesters set fire to an Oakland, California, courthouse; vehicles were set ablaze in Richmond, Virginia; and an armed protester was shot and killed in Austin, Texas.

Two people were shot and wounded in Aurora, Colorado after a car drove through a protest.