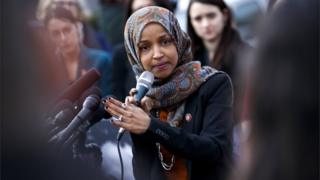 A new Democratic congresswoman is facing a firestorm of criticism for suggesting US politicians only support Israel because of lobby money.

Ilhan Omar suggested in a tweet that the American Israel Public Affairs Committee (Aipac ) was buying influence to promote US pro-Israel policies.

The Minnesota lawmaker has previously been accused of anti-Semitism.

In response to a tweet on Sunday from a journalist questioning why US political leaders always defend Israel, Ms Omar used a slang term for $100 bills, writing: “it’s all about the Benjamins baby.”

It's all about the Benjamins baby ? https://t.co/KatcXJnZLV

When challenged where she thought such money was coming from, the 36-year-old Somali-American tweeted back: “Aipac.”

Aipac spends millions of dollars a year lobbying lawmakers and the US federal government to adopt pro-Israel policies, according to campaign-finance monitors.

Aipac’s website says it offers a congressional club membership that requires “political contributions in a clearly pro-Israel context to candidates”.

However, it is one of countless special interest groups in Washington DC that advocate on issues covering everything from abortion to gun control, unions, energy, defence, healthcare and beyond.

In response to Ms Omar, Aipac tweeted: “Our bipartisan efforts are reflective of American values and interests.”

We are proud that we are engaged in the democratic process to strengthen the US-Israel relationship. Our bipartisan efforts are reflective of American values and interests. We will not be deterred in any way by ill-informed and illegitimate attacks on this important work.

Ms Omar – who in November became one of the first two Muslim women elected to Congress – has been criticised before for criticisms of Israel.

She has come under fire for supporting the Boycott, Divestment and Sanctions movement (BDS), which seeks to isolate Israel economically to force it to change its policies towards the Palestinians.

Last month, Ms Omar apologised for saying Israel had “hypnotised” the world – a term once used by Nazis.

She said she had not been aware of the historical context.

Republicans have criticised Ms Omar over her latest controversy, but the backlash was just as intense from congressional members of her own party.

Congresswoman Omar’s statements are deeply hurtful to Jews, including myself. pic.twitter.com/u3f2JHESFA

Elaine Luria of Virginia and Josh Gottheimer of New Jersey on Monday published a letter urging House leaders to “unite against anti-Semitism and hateful tropes and stereotypes”.

The letter did not name Ms Omar, but said top Democrats, including House of Representatives Speaker Nancy Pelosi, must confront lawmakers who make “reckless statements”.

Chelsea Clinton, daughter of former President Bill Clinton and former Secretary of State Hillary Clinton, tweeted: “We should expect all elected officials, regardless of party, and all public figures to not traffic in anti-Semitism.”

Ms Omar later responded to Ms Clinton by saying she would be “happy to talk”, adding “we must call out smears from the [Republican party] and their allies”.

?? Chelsea – I would be happy to talk. We must call out smears from the GOP and their allies. And I believe we can do that without criticizing people for their faith.

I look forward to building an inclusive movement for justice with you. ?? https://t.co/EGA9NQfBCi

Anti-Semitic tropes have no place in the halls of Congress. It is dangerous for Democrat leadership to stay silent on this reckless language.

Mr McCarthy himself faced condemnation last year for a now-deleted tweet that suggested billionaire Jewish donors were attempting to “buy” the mid-term elections.