Distressing footage has been released of a mother and her two young children being lowered down a nine metres (30ft) wall using a rope on the US-Mexico border.

The family, who are undocumented migrants from Venezuela, were helped over the border wall by human smugglers about three miles (4.8km) west of the Calexico West Port of Entry in the early hours of Thursday morning.

Camera operators saw three smugglers providing a ladder to climb the fence on the Mexican side before using a rope to lower down each person over the wall into the United States. 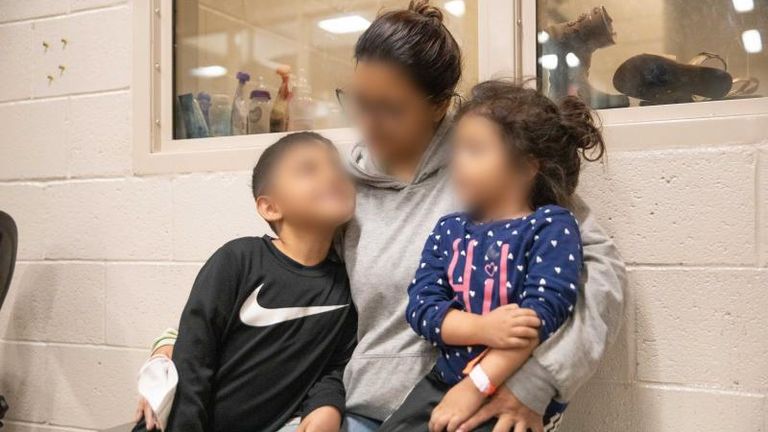 A man was lowered over the wall first before a second man followed as a small child clung to his back. A woman was then seen holding on to another child.

The three adults and two children were taken into custody and transported to El Centro Processing Center.

Agents found the children were a two-year-old girl and a six-year-old boy, and the woman was their 32-year-old mother.

The smugglers were unrelated to the mother and her children.

Chief patrol agent Gregory Bovino said the smugglers had tried to “minimise their own risk of injury” by using a rope and ladder.

“They are willing to put others in jeopardy, including children, even when they won’t risk themselves,” he said.

“These heartless, greedy smugglers continue to endanger the lives of undocumented individuals for money. We were lucky that the mother and her two children, as well as the other two men, were not dropped from the 30ft border wall.”

A rising number of migrants, including families and unaccompanied children, have been arriving at the US-Mexico border since the Biden administration came into power.

Dramatic spikes in the number of children crossing the border have led to a massive expansion of emergency facilities to house them after President Joe Biden said he would not quickly expel unaccompanied children like his predecessor Donald Trump.

More than 22,000 migrant children were in government custody as of Thursday.