Federal authorities negotiate a deal with Oregon to increase police presence in Portland in exchange for the departure. 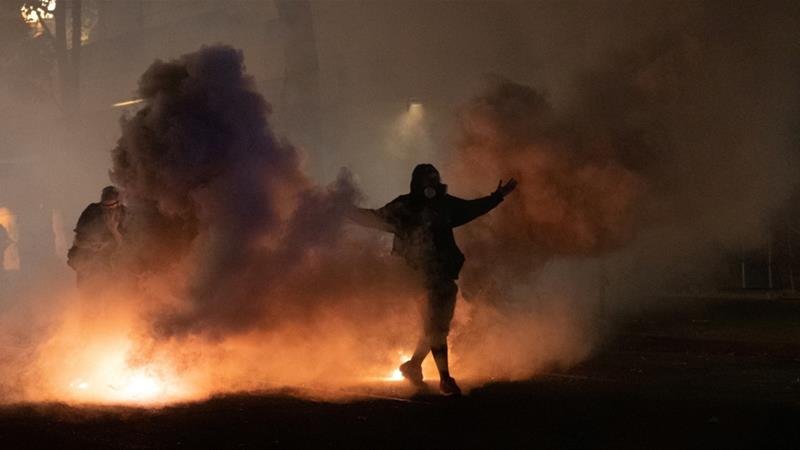 Federal agents who have clashed with protesters in Portland, Oregon, will begin a “phased withdrawal” from Oregon’s largest city, Governor Kate Brown said on Wednesday.

Acting Homeland Security Secretary Chad Wolf said in a statement the plan negotiated with Brown over the last 24 hours includes a “robust presence” of Oregon State Police in downtown Portland.

“State and local law enforcement will begin securing properties and streets, especially those surrounding federal properties that have been under nightly attack for the past two months,” Wolf said.

The agents will begin leaving the city’s downtown area on Thursday, Brown said.

President Donald Trump appeared to stand firm with his deployment of federal agents to Portland.

Trump told reporters on Wednesday morning: “We’re not leaving until they secure their city” as he began a trip to Texas to tout his energy policy.

The ACLU accused federal agents of acting unlawfully in Portland.

“This administration claims to be defending the federal courthouse, but won’t obey the orders coming out of it. What purpose are these agents actually serving, then?” said Kelly Simon, interim legal director of the ACLU of Oregon.

One journalist, Jonathan Levinson, of Oregon Public Broadcasting, said in a statement to the court that while he was trying to take a photograph on Friday, he saw a federal agent raise his weapon, aim it at him and fire several rounds.

“My camera and lens were splattered with paint,” Levinson said. “Based on my position and the position of people around me, there is almost no chance the agent was aiming at anyone other than me.”

Levinson, who has covered conflicts worldwide, said he was wearing a press pass and a helmet that says “PRESS” in big letters on the front and back.

Kat Mahoney, a legal observer with the ACLU, said a federal agent fired a paintball at her, hitting her in the head on Friday. The next night, an agent sprayed her and three other observers in the face as they told him they were legal observers and pointed to their credentials.

BREAKING: We’re receiving reports that at least one protester was abducted off the streets today by unmarked “officers” — this time in New York City.

These dangerous, abusive, and indefensible actions must stop. Law enforcement must be held accountable. pic.twitter.com/I9VQo4Tvbx

There was no immediate comment from the federal agencies on the motion and accusations.

Two groups also have sued the Department of Homeland Security, alleging it violated the constitution by sending federal law enforcement to disperse crowds with tear gas and rubber bullets.

The agency did not immediately respond to a request for comment about the lawsuit from the Wall of Moms – a group of self-described mothers – and the Don’t Shoot Portland group.

Members of the group of mothers have “been tear-gassed night after night, left vomiting and unable to eat or sleep because of the toxic poison blasted at them,” the lawsuit said.

Portland’s Democratic mayor, Ted Wheeler, and City Commissioner Jo Ann Hardesty had asked Wolf on Monday for a meeting to discuss a ceasefire and their desire for the removal of the extra federal agents deployed to Portland.

On the same day, US Attorney Billy J Williams insisted that the agents will remain as long as protesters keep attacking the Mark O Hatfield Federal Courthouse.

Protesters have tried almost every night to tear down a fence erected to protect the building, set fires in the street and hurled fireworks, Molotov cocktails and bricks, rocks and bottles at the agents inside.

On the 60th night of protests, demonstrators near the court were met with tear gas, pepper balls and stun grenades fired by agents early on Tuesday.