The image was posted on social media by a Kansas newspaper owned by a county Republican chairman. 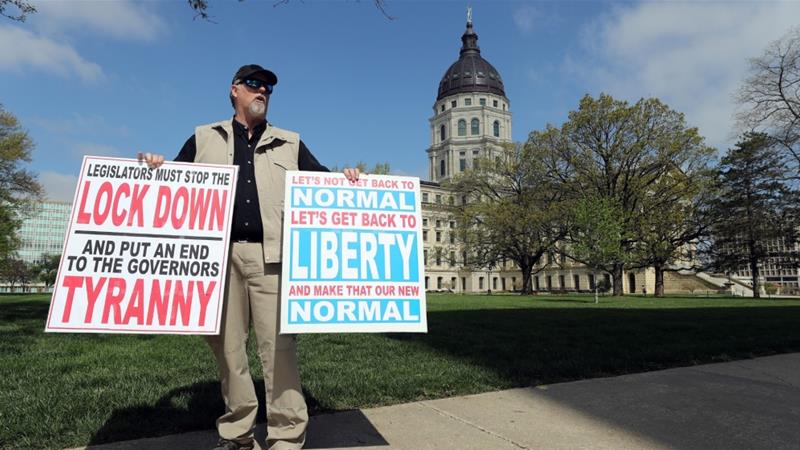 A cartoon posted on the social media account of a weekly Kansas newspaper owned by a county Republican Party chairman has been condemned for comparing a state mandate requiring all residents to wear masks in public in light of the coronavirus pandemic with the roundup of Jews during the holocaust.

The cartoon posted on the Anderson County Review’s Facebook page depicts Governor Laura Kelly, a Democrat, wearing a mask with a Jewish Star of David on it, next to a drawing of people being loaded onto train cars.

Its caption reads: “Lockdown Laura says: Put on your mask … and step onto the cattle car.”

About six million Jews were systematically executed by Nazi Germany between 1941 and 1945, with many rounded up and transported to concentration camps via trains.

Hicks’s characterisation is in line with some Republicans in the state who have criticised Kelly’s order as infringing on personal liberties, although Kansas law allows counties to opt out of the mandate. Anderson County, with a population of about 7,900, has done so.

Under pressure from the state’s Republican-controlled legislature, Kelly had previously lifted statewide restrictions on businesses and public gatherings on May 26, making Kansas one of several states across the US that health officials have criticised for reopening too early.

Rabbi Moti Rieber, the executive director of Kansas Interfaith Action, in an interview with the AP news agency said it was “incoherent” to equate an action designed to save lives with mass murder.

He added that putting the Star of David on Kelly’s mask is anti-Semitic because it implies “nefarious Jews” are behind her actions.

“This thing is like the trifecta of garbage,” Rieber said.

Hicks, in his statement, also shrugged off suggestions he should apologise.

“Apologies: To whom exactly?” he said. “The critics on the Facebook page? Facebook is a cesspool and I only participate to develop readership.”

He added he “intended no slight” to Jews or Holocaust survivors.