Democrats and Republicans vow to put ‘serious sanctions’ on the kingdom and crown prince over Jamal Khashoggi’s murder. 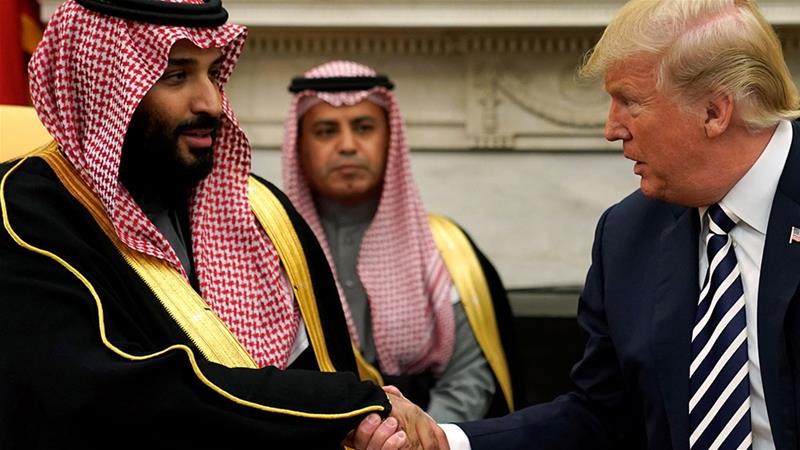 US senators accused President Donald Trump on Tuesday of putting “Saudi Arabia first” in his decision to not take punitive measures against the kingdom or Crown Prince Mohammed bin Salman over the murder of journalist Jamal Khashoggi.

Trump’s decision is “yet another fawning prostration to a foreign authoritarian,” Democratic Senator Tim Kaine tweeted on Tuesday. “It’s only a matter of time until actions like this one by the president directly threaten our security,” he added.

In a statement issued by the White House on Tuesday, Trump said the US intends to remain a “steadfast partner” of Saudi Arabia even though “it could very well be” that Prince Mohammed had knowledge of the killing of Khashoggi.

“We may never know all of the facts surrounding the murder of Mr Jamal Khashoggi. In any case, our relationship is with the Kingdom of Saudi Arabia,” Trump said.

He added that he did not intend to cancel military contracts with the kingdom, saying “if we foolishing cancel these contracts, Russia and China would be the enormous beneficiaries”.

Trump’s comments came despite pressure from US policians who have called on the administration to do more to hold Saudi Arabia accountable. That pressure mounted following US media reports on Friday that said the CIA concluded Prince Mohammed, also known as MBS, ordered Khashoggi’s murder.

In his statement, Trump said it “could be very well that the crown prince had knowlege of this tragic event – maybe he did and maybe he didn’t!” Later on Tuesday, the president added that the CIA assessment of the intelligencie surrounding the murder is not “definitive”.

Khashoggi, a contributing columnist for the Washington Post, was killed at the Saudi consulate in Istanbul on October 2 when he went there to pick up documents needed for his planned marriage.

A critic of the Saudi government, Khashoggi had resisted pressure from Riyadh for him to return home.

Saudi Arabia initially rejected its nationals were behind the killing, but as Turkish authorities continued to leak evidence of high-level involvement, Riyadh eventually admitted its agents carried out the killing with a series of contradictory explanations.

Saudi Arabia’s deputy public prosecutor has said he was seeking the death penalty for five suspects charged in Khashoggi’s killing. Al-Shaalan told reporters the Saudi crown prince knew nothing of the operation, in which Khashoggi’s body was dismembered and removed from the consulate.

Several senators vowed to put “serious sanctions” on Saudi Arabia, including on the “appropriate members of the royal family”.

“We should, at the very least, NOT reward Saudi Arabia with our sophisticated armaments that they in turn use to bomb civilians,” tweeted Republican Senator Rand Paul. “I’m pretty sure this statement is Saudi Arabia first, not American First,” he added.

Republican Senator and Trump ally Lindsey Graham said “it is not in our national security interest to look the other way” when it comes to Khashoggi’s killing.

“I firmly believe there will be strong bipartisan support for serious sanctions against Saudi Arabia, including appropriate members of the royal family, for this barbaric act which defined all civilised norms,” he added. “While Saudi Arabia is a strategic ally, the behaviour of the crown prince – in muliple ways – has shown disrespect for the relationship and made him, in my view beyond toxic.”

Last week, a bipartisan group of US senators introduced legislation seeking to punish Saudi Arabia over Khashoggi’s killing and for its role in the devastating war in Yemen.

The move came not longer after the US imposed economic sanctions on 17 Saudis allegedly involved in the journalist’s murder. Many senators expressed disappointment that those sanctions did not include the crown prince himself, and called on the US to take tougher action.

The proposed legislation seeks to suspend weapon sales to Saudi Arabia and prohibit US refuelling of Saudi coalition aircraft conducting air raids in Yemen. It would also impose sanctions on anyone blocking humanitarian access in Yemen and anyone supporting the Houthi rebels.

Senator Bernie Sanders said a vote on the Senate legislation could come as early as next week.

Democratic Senator Dianne Feinstein said she plans to vote against any future arm sales and appropriation to Saudi Arabia.

“Human rights is more than just a phrase, it has to mean something. And that means standing up and condemning a brazen murder by a foreign government,” she said.

In his statement on Tuesday, Trump said he was aware that some members of Congress “would like to go in a different direction” and they are “free to do so”.

“I will consider whatever ideas are presented to me, but only if they are consistent with the absolute security and safety of America,” he added.

Also on Tuesday, Republican Bob Corker and Democrat Bob Menendez, chairman and ranking member of the Senate Foreign Relations Committee demanded the administration make a determination on whether Prince Mohammed is responsible for the murder of Khashoggi.

The pair led the effort in triggering the Global Magnitsky Act on October 10, which required the president within 120 days to investigate and determine if a foreign person is responsible for a gross human rights violation.

The sanctions on the 17 Saudi nations came as a result of the measure, but Corker and Menendez want the administration to specifically address whether Prince Mohammed is responsible for Khashoggi’s murder. The initial letter triggering the Magnitsky Act did not mention the crown prince’s name.

The senators said they expect to receive Trump’s determination within 120 days of the original October 10 request.