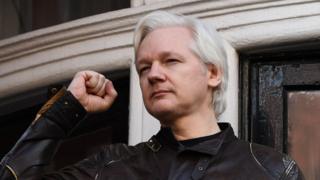 The US Justice Department is preparing charges against WikiLeaks founder Julian Assange, reports in the US say.

The reports came as a filing in a separate court case hinted that charges were being prepared. Justice officials said the filing was made in error.

Mr Assange fled to Ecuador’s London embassy in 2012 to evade since-dropped sex assault charges and has stayed over fears of extradition to the US.

It is not clear what charges Mr Assange would face.

However, the US Mueller inquiry into alleged Russian election interference has suggested that WikiLeaks was used by Russian intelligence to distribute hacked material.

Wikileaks published thousands of emails hacked from Democrats during the presidential race between Mr Trump and Hillary Clinton.

The separate court case involves defendant, Seitu Sulayman Kokayi, who is charged with coercion and enticement of a minor.

The filing about the case was from a prosecutor in the eastern Virginia state district court, Assistant US Attorney Kellen Dwyer.

In the filing, Mr Dwyer says documents should remain sealed because “due to the sophistication of the defendant and the publicity surrounding the case, no other procedure is likely to keep confidential the fact that Assange has been charged”.

The documents “would need to remain sealed until Assange is arrested in connection with the charges in the criminal complaint and can therefore no longer evade or avoid arrest and extradition in this matter”, Mr Dwyer goes on to say.

It was not clear if any charges against Mr Assange had been filed. The Justice Department said the filing was a mistake, without specifying why, while WikiLeaks believed it was a “cut and paste” error.

SCOOP: US Department of Justice "accidentally" reveals existence of sealed charges (or a draft for them) against WikiLeaks' publisher Julian Assange in apparent cut-and-paste error in an unrelated case also at the Eastern District of Virginia. https://t.co/wrjlAbXk5Z pic.twitter.com/4UlB0c1SAX

One of Mr Assange’s lawyers told the Guardian newspaper that charging someone for publishing accurate information was a “dangerous path for a democracy to take”.

“The news that criminal charges have apparently been filed against Mr Assange is even more troubling than the haphazard manner in which that information has been revealed,” Barry Pollack told the newspaper.

The US media reports say US officials are increasingly confident that Mr Assange will be detained and face charges in the US.

Earlier this year the British government said it was holding talks with Ecuador over Mr Assange’s fate.

Ecuador’s President Lenin Moreno has said he was never “in favour” of Mr Assange’s activities and has described him as a “stone in our shoe”.